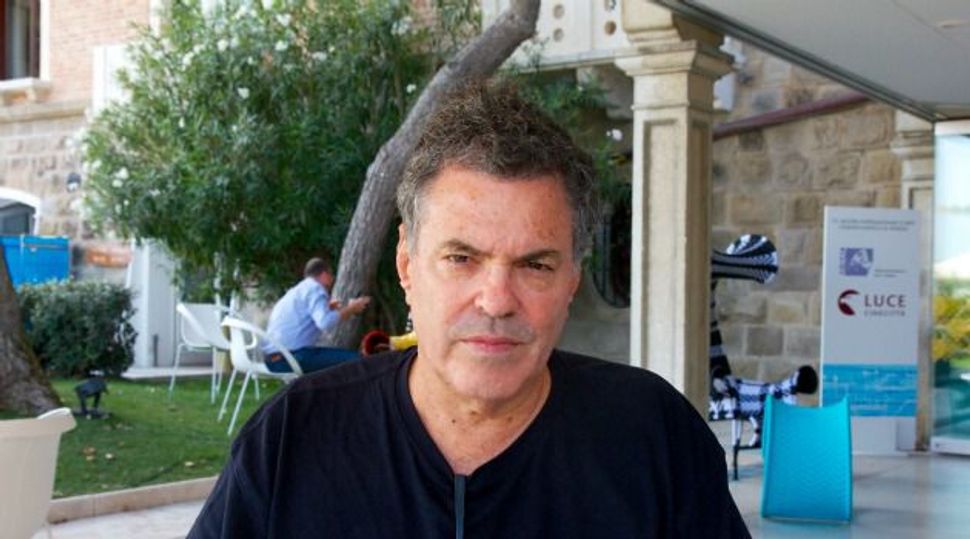 The Lion in Winter: Amos Gitai?s latest film was inspired by the story of a Jewish survivor of Auschwitz. Image by AJ Goldmann

‘Rhythm is political,” said Amos Gitai, wearing a black t-shirt and classic Ray-Bans as he leaned back in his chair at the Cinecittà Lounge of the Hotel Excelsior at the 70th Venice Film Festival. It was erev Rosh Hashana and the 62-year-old director was there to present “Ana Arabia,” his new film — shot in a single take. “You have the speedy evening news. Cinema needs to install time, it needs to install understanding and sensitivity,” he continued.

In recent years, Israeli cinema has been increasingly well represented in Venice, the world’s oldest film festival. In 2009, Samuel Maoz’s “Lebanon” even scooped up the Golden Lion. In doing so, it became the first Israeli film to take home the top prize at a major European film festival. And last year, Rama Burshtein’s “Fill the Void,” by and about Haredim, walked away with the best actress award for Hadas Yaron.

“Ana Arabia” is a bold and distinctive film from a director who, now in his fifth decade of filmmaking, can lay claim to the title of Grand Old Man of Israeli Cinema. A young journalist (Yuval Scharf) walks into a small enclave of Jews and Arabs who live seemingly cut off from the outside world, in a corner between Jaffa and Bat Yam. In their run-down shacks and in the neighboring lemon orchard surrounded by public housing, the journalist discovers the live stories, dreams, frustrations and hopes of this small community.

As is the case in many of his previous films, “Ana Arabia” is inspired in part by real events. In this case, Gitai’s starting point was a news item about a Polish-born Jewish survivor of Auschwitz who immigrated to Israel and married a Palestinian. Together, they had five children and 25 grandchildren. Additional material for his screenplay (co-written with longtime collaborator Marie-José Sanselme) also came from a series of documentaries about Jews and Arabs living in Wadi, a valley to the east of Haifa, that Gitai has been making for the past three decades. Liberally blending fact and fiction, the film illustrates quotidian interactions between Israelis and Palestinians. Both intriguing and intense, it was one of the strongest entries in this year’s competition line-up, a fact made all the more impressive by its simplicity.

For Gitai, it was important to avoid unnecessary ornamentation in the film. Indeed, the technical feat of setting up “Ana Arabia” as a single 81-minute-long shot matches the film’s dramatic and philosophical concerns. “I see too many films that have form but no meaning. But sometimes, we see a film where we can identify with the meaning, but it’s too instrumentalized and didactic. I think the real challenge is to try to do both. I wanted to tell a story about the mixed-ness of the society, the contradictions, the love stories, the failed love stories and history with a big ‘h,’ and I want to show that this complexity should survive as a continuity. So when I decided this, I asked myself what the best form to talk about this was. A one-sequence shot suggests that we will not cut between Arabs and Jews, Israelis and Palestinians, and women and men. It’s also a statement against what is happening in the region — the brutality, savagery, killing, ethnic cleansing. And I’m saying no, we need the other. Because if we have the other, we also discover things about ourselves. And the Middle East anyway, the Mediterranean, which is supposed to have been the cradle of civilization, was about mixing.”

Gitai described making a one-shot film as a “high-risk” project: “I could have ended by having the film or having zero,” he said. “If the one shot was not good, there was no film.”

Shooting the film in one go also presented logistical challenges: after the second take, they needed to bring in a Chinese acupuncturist for the overwhelmed Steadicam operator. They finally got it right with the 10th take, which Gitai described as a “moment of grace for our private little kibbutz,” a joking reference to the film crew and seven Israeli and Palestinian actors.

As it follows and records the film’s various stories and conversations, the gliding yet unhurried camera of “Ana Arabia” almost becomes unnoticeable. “I take it almost as a compliment that some people who’ve seen the film and haven’t read anything about it before, they come to me and they say, ‘We didn’t realize it was one shot.’ It means that the formal gadget doesn’t take over,” says Gitai.

One of the most important characters in “Ana Arabia” is the location itself, a small slum-like dwelling. Gitai, who was trained as an architect (his father was the Bauhaus architect Munio Weinraub), said that the unique geography and simple architecture of the place was an antidote to the wasteful and impractical design he finds to be prevalent in today’s world. “I’m a bit exhausted, as a citizen, by all these exaggerated architectural gestures, all these skyscrapers that don’t mean anything, all these museums that just show the building without letting us see the paintings peacefully. Good architecture for me is not just about design. It’s about making livable spaces for people with a good composition.”

Like so much of Gitai’s oeuvre, “Ana Arabia” is an artistic response to a political reality. “The region is going through so much savagery, it is necessary and urgent to pose some questions about it. And my language of posing questions is cinema,” he said. One can call Gitai a political filmmaker, but he is essentially an artist, not a politician. Nevertheless, he is allowed to hope that his films transmit a politically healthy message to a troubled part of the world.

“It could end in massacre, but we need to simulate the other option,” he said. “In this region, people need to believe not only in bombs, machine guns and money, but also in ideas. And we must keep these ideas of coexistence alive.”

AJ Goldmann is a writer based in Berlin, Germany. He writes frequently about the arts for the Forward.