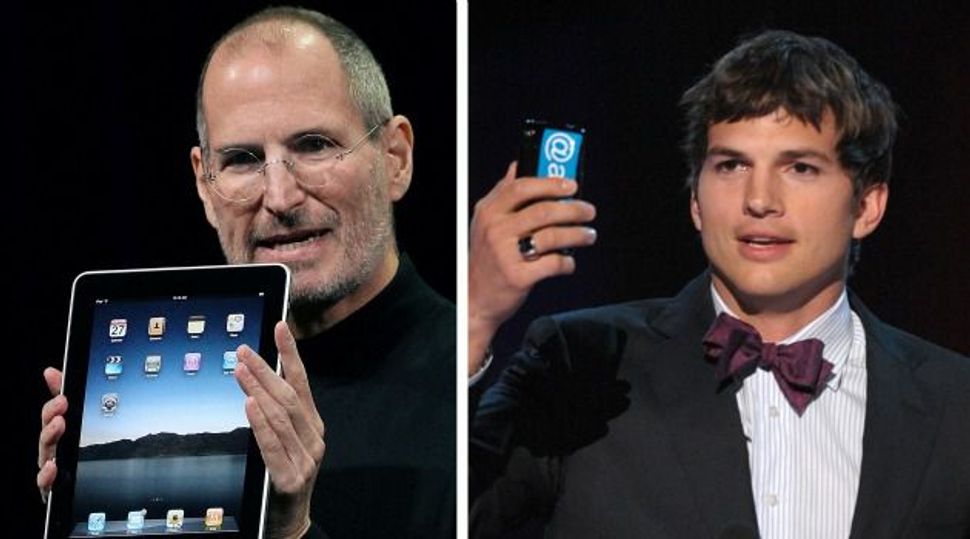 The Apple of Temptation: Steve Jobs, portrayed on screen by Ashton Kutcher (right) had a man-crush on Bob Dylan, among other seemingly Jewish fascinations. Image by Getty Images

Steven Paul “Steve” Jobs – who is currently being portrayed by Ashton Kutcher in the biopic “Jobs” — was the biological child of a Syrian-born father and a Swiss-American Catholic mother who gave him up for adoption at birth.

He was raised in northern California by a working-class couple — Paul Reinhold Jobs and his wife, Clara Jobs, an Armenian-American born Clara Hagopian — whom he always regarded as his true parents.

So other than being a really smart, creative, bespectacled, successful businessman with a vaguely Middle Eastern countenance and a man-crush on Bob Dylan, there was nothing overtly or suggestively Jewish about Steve Jobs.

That being said, there were and are some affinities between Jobs and his company, Apple, and Judaism – enough to suggest that in the game of Jew vs. non-Jew, it was Apple and Jobs that came out looking a lot more Jewish than their arch-rivals: Microsoft and William Henry “Bill” Gates III.

Seth Rogovoy frequently writes about the Kabbalah of popular culture for The Forward.