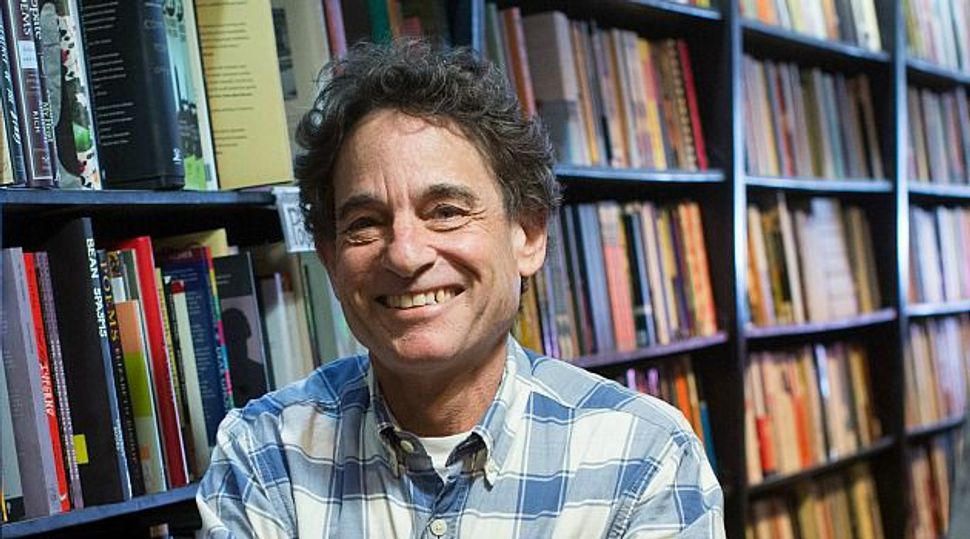 Full Circle: Ezra Goldstein became a writer instead of going into the family business. He later left writing to run his own bookstore, in the literati-rich Brooklyn neighborhood of Park Slope. Image by lisa amand

Once upon a time in Zanesville, Ohio, Ezra Goldstein faced a life-altering choice: stay put and help run the family electrical shop, or chase the dream of being a writer.

Fast-forward three decades to Brooklyn, N.Y., circa 2010, when Goldstein faced a fork in the road that in many ways mirrored the first. This time, he gave up writing to run a famous bookstore. The decision prompted his aunts in the Buckeye State to crow that he’d come full circle.

Now 64, Goldstein is much more than a merchant. As co-owner of Community Bookstore in literati-rich Park Slope, he’s become an oracle for readers and most of all a magnet for the hundreds of writers who live within a stickball swing of the Seventh Avenue store.

Even if it never occurred to him that one day he’d peddle books rather than write them, owning the oldest independent bookstore in Brooklyn suits him. When the Forward caught up with Goldstein, he was frantically organizing days of simultaneous events for the Brooklyn Book Festival, which took place on September 22. Taking a break in the store’s bucolic backyard, wearing a faded jean jacket as his hair blew in the gentle wind, he reflected on his circuitous path.

Instead of going into the electrical supply business, Goldstein did in fact become a prolific writer, penning the play “Swimming with Sturgeon,” a young adult novel about a Holocaust survivor, two ghost-written memoirs for Holocaust survivors and numerous newspaper and magazine articles. He’s wistful about his former writing life — he has hardly written a word since buying the store — but he’s invigorated by an “all-consuming” job that’s changed his life “180 degrees.”

Goldstein goes to Zanesville every year for Rosh Hashanah to make a minyan with a dwindling Jewish community. After those trips, Goldstein, a father of three, tells his wife Annette that the cost of living is so low there that they could move back and live like kings. To which she responds that if he moves back to Ohio, he can live like a king. Goldstein concedes that he’s not about to give up the charmed lifestyle in Brooklyn. He and Annette enjoy the tight-knit neighborhood, the Park Slope Food Coop and the Park Slope Jewish Center.

He and co-owner Stephanie Valdez needed a second business like holes in the head. Yet a few months ago, when the owner of Babbo’s Books in nearby Windsor Terrace asked if they’d take over the store, they agreed. “Perhaps it was a crazy and wild thing to do,” said Goldstein. They renamed it Terrace Books. “We really believe in bookstores and we wanted [Babbo’s] to be there.”

High-profile writers like Paul Auster and his wife Siri Hustvedt and Jonathan Safran Foer and his wife Nicole Krauss gravitate to Community Bookstore not only to sign copies of just-published work often featured in the front window, but also to shop. “It’s a wonderful store. Ezra and Stephanie really rejuvenated it. I can’t tell you how much I appreciate it, as a writer and reader,” Auster said. (His memoir “Report from the Interior” comes out November 19.)

Even if cheap online shopping poses the greatest threat to small bookstores, Community Bookstore and Terrace Books offer an experience Amazon can’t — talking face to face with someone in the know. Goldstein reads as many new books as possible (right now, Thomas Pynchon’s “Bleeding Edge” and Jonathan Lethem’s “Dissident Gardens”) so he can respond intelligently to customers. Not having time to read everything is a “constant source of frustration,” he says, as people ask for his opinion every day. “I’ll be honest about deficiencies…. Probably not a good thing. I’ve lost some sales through my honesty.”

Although “Fifty Shades of Grey” kept many bookstores afloat in 2011, Community Bookstore refused to stock it. “We refuse to carry shlock… It was a terrible book, a poorly written book.” He doesn’t want to sound elitist; the bookstore does stock some bestsellers. “We have nothing against popular books. We are capitalists with a small ‘c.’ But if a popular book is not going to sell at our store, we’re not going to carry it.”

Marketing strategies include clever tweeting on Community Bookstore’s twitter account, @communitybkstr and @tinytheusurper, the personal account of Tiny, the moody cat known to stretch out on stacks. The store even had a TV cameo; an episode of Louis C.K’.s show, “Louie,” was filmed there last year. Community Bookstore’s extended family gathered at a Brooklyn bar to watch the episode, in which Parker Posey plays a sexy, psycho bookseller who intrigues, dates and scares the shy comedian.

Goldstein encourages local authors to keep him posted about their accomplishments. In an email to the Forward, Alexandra Styron, daughter of William Styron, recalled walking into the store in 2011, the day before the publication date of her poignant page-turner, “Reading My Father.”

“They didn’t have the book on their shelves. Normally I wouldn’t say anything — I’m not very good at self-promotion — but it was my neighborhood store… and I thought it would be sad for both of us if our local friends couldn’t purchase it.

“So I walked up to the counter and said, ‘Ezra, I have a book coming out tomorrow and you don’t have it.’ He was very sweet and totally mortified, explaining that he hadn’t worked the kinks out of the ordering process yet. Needless to say, he had the book in the window within 24 hours.”

The store’s scope is by no means limited to the borough. Kelly Braffet, daughter-in-law of Stephen King, visited Community Bookstore in August with her Goldstein-acclaimed novel, “Save Yourself.” He was equally effusive about former Park Slope resident and Pulitzer Prize winner Elizabeth Strout, who read at the store’s offsite venue, Congregation Beth Elohim. Pulitzer Prize winner Michael Chabon will be at the synagogue on October 3 for the paperback launch of his most recent novel, “Telegraph Avenue.”

Not only are some of Goldstein’s customers major writers, his staff is made up of published scribes, a fact that makes him beam with pride. Yet that’s not a requirement for employment: “You just have to love books and read a lot, and really enjoy putting books into people’s hands.”

Lisa Amand is a James Beard Award-winning writer. Find her on Twitter @Imnofoodie