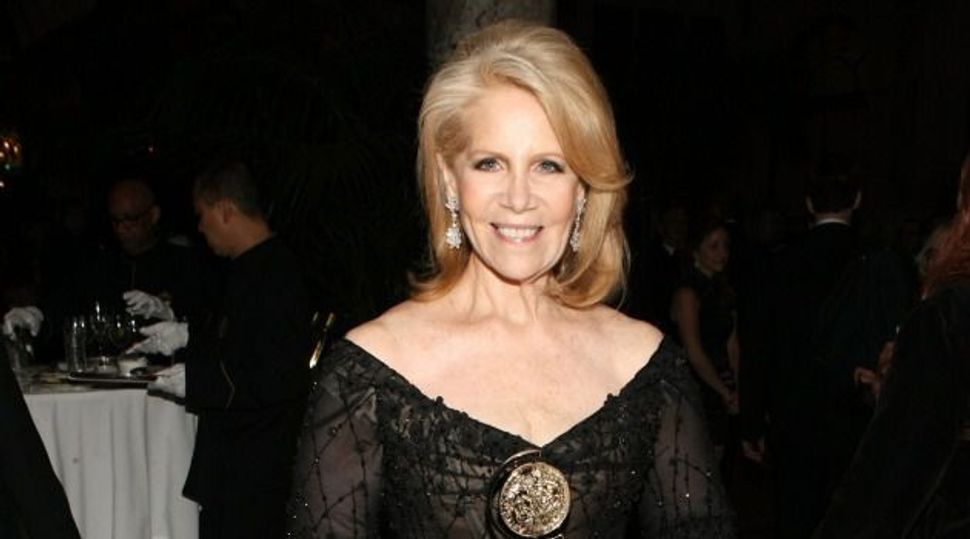 Theater producer Daryl Roth says that she has not encountered sexism or ageism on the job, though she’s faced her share of painful challenges, especially early on in her career.

“When I started in ’88 -’89, I was new to theater,” Roth recalled as she sat in her exquisitely appointed West 57th Street corner office. “And because I was married to a very successful man [real estate mogul Steven Roth] who, by the way, is self-made, I was viewed as a dilettante by those who were entrenched. They looked at me — ‘Who is this person?’ And they assumed I’d be gone soon. It’s been 26 years, but I still feel a strange hurtfulness.”

Roth now has her sights set on John Grisham’s “A Time to Kill,” slated to open on Broadway at the John Golden Theatre on October 20. Adapted by Rupert Holmes, it is a courtroom drama set in a Mississippi town in the 1980s and tells the story of a black man who murders the two white rednecks who raped and beat his young daughter. Convinced the court system will not hold the thugs culpable, he takes the law into his own hands.

Roth says she was drawn to the project, not simply because she’s a John Grisham fan, but because the novel explores “the point at which race and justice intersect in our society,” she noted. “I don’t know if race and justice are played out fairly. I’m interested in the question, ‘When is it right for a person to defend his family when the law won’t?’ Is there a time for justice, a time to kill? It’s complicated. Nothing is black and white. Pardon the pun.”

Roth has an uncanny ability to find plays that can achieve critical acclaim while appealing to a broad audience. She admits it’s a balancing act, as she looks for works that mirror society and are steeped in reality. Family dynamics and the experiences of gay life are of special interest, not least because her son, producer Jordan Roth, president and majority owner of Jujamcyn Theaters, is gay.

Identity politics onstage and off have particular resonance for Roth. “Being true to one’s self and being acknowledged for who you are is so important,” she asserted. “I understand the outsider’s mentality. People look at me now and don’t believe that. And I am incredibly lucky. But that wasn’t always the case.”

Roth dealt with the experience of feeling unacknowledged even before she started out as a producer. She grew up in Wayne, N.J. where, she said, she was “the only Jew” and “very much felt like the outsider.”

As a child, her family attended a Conservative synagogue, and today she’s affiliated with the Reform movement. “Being Jewish molds who I am and it’s not religion,” she said. “It’s something about being Jewish — whatever that means — that’s part of my DNA.”

She also credits her father with shaping her life-long concerns and onstage aesthetic. “He was a moral and decent man who believed in the dignity of every human being,” Roth remembered. “He said you should respect and regard all people as equals. He believed in human rights and equality in the world.”

Roth has produced a fair number of plays that focus on Jewish themes and characters, including “My Name is Asher Lev,” “Irena’s Vow,” “Old Wicked Songs” and “The Tale of The Allergist’s Wife,” and she is vigilant about not promoting stereotypes or using bigoted language onstage.

Still, she cast Vanessa Redgrave to play the Jewish doyenne in “Driving Miss Daisy,” keenly aware that many Jews view Redgrave as an anti-Semite and might wonder why she was cast in the role — though Redgrave has played other Jews — when there are so many other fine actresses who could take on the part and not offend anyone.

“It did cross my mind that this might be a subtext when I approached investors,” Roth conceded. “But only one investor would not invest because of the casting. I felt Vanessa Redgrave is one of the most phenomenal actresses of the day and if she was willing to play the part and bring her talent to that role, I personally had to support that choice.”

Roth, who has received the National Foundation for Jewish Culture’s Patron of the Arts Award and the Jewish Theological Seminary’s Louis B. Marshall Award, does not view herself as especially politically-minded.

Her concerns are moral. She is a vegetarian and animal activist. She serves on the board of the Animal Rescue Fund, and produced a documentary, “My Dog: An Unconditional Love Story.” She also produced the Oscar-nominated “Albert Nobbs,” and says she is hoping to produce movie versions of “The Tale of the Allergist’s Wife” and “The Temperamentals,” a play centering on the Mattachine Society, a gay rights organization of the early ’50s.

Roth has a reputation for tenacity and fierce loyalty. “Daryl has played an enormous role in my life and career over the past 13 years,” said playwright and actor Charles Busch. “She has taken me under her wing as she has a number of other very fortunate people, and provided us with so many opportunities to work and learn, and she doesn’t give up on us if we fail numerous times.”

Still, there was nothing in her life that prepared her for the kind of mega-success she has enjoyed. Following her graduation from New York University, she was drawn to the arts — first design and then theater — but didn’t quite know what role she could play. In the interim, she married, had two children and joined various theater companies,.

“My catalyst was working with lyricist Richard Maltby Jr. at City Center,” she said. “He invited me to hear songs that he and composer David Shire had written. I loved the songs — each one was a little story about personal changes — but I still don’t know where I had the confidence to take the show to Williamstown and then to the Cherry Lane where it ran nine months. The show was ‘Closer than Ever’ and the songs are among the most frequently used audition pieces.”

From the outset, Roth has produced projects that spoke to her sensibility, whether or not they seemed likely to find a wide audience. Indeed, her early productions were housed off-Broadway. “At least I felt fulfilled,” she said.

To date, the show she is most proud of is “Kinky Boots,” in large part because of her intense involvement right from the get-go. At Sundance, where Roth viewed the film upon which the musical came to be based, she had a startling epiphany.

“I realized this is the story I wanted to tell on stage as a musical,” she noted. “It had the elements I cared about: relationships, acceptance and the courage to be who you are.”

Asked what she wants her legacy to be, Roth said that she would like to be remembered as someone who “did wonderful plays that changed peoples’ minds.”