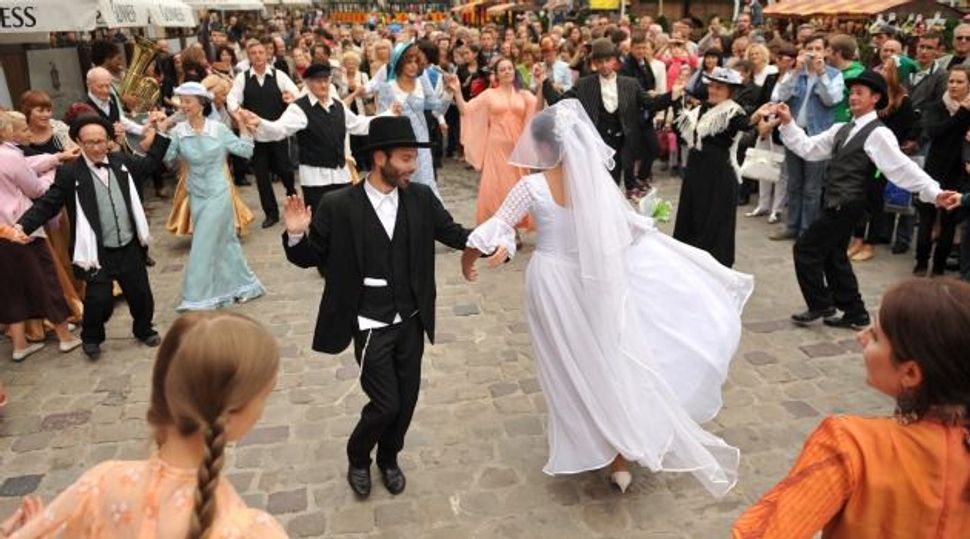 Customs of the Country: Dancers perform at the International Fest of Jewish Music in Lviv, Ukraine. Image by Getty Images

Last year, Tel Aviv University held what looks to have been a fascinating conference: “Minhagim: Custom and Practice in Jewish Life,” a cross-cultural inquiry into the nature of minhag, or custom, and its relationship to localized patterns of authority and ritual practice. Several days were devoted to exploring the ways in which Romanian Jews decorated tombstones, Yemenite Jews avoided demons, Ukrainian Jewish women gave birth, German Jews lifted up their voices in song and Israeli Jews silenced theirs in commemoration of the fallen.

Given my long-standing interest in American Jewry’s vernacular culture and its distinctive constellation of customs, from kosher-style cuisine to yahrzeit memoranda, I would have relished the opportunity to compare notes with my colleagues and to stretch the parameters of my thinking about Jewish life at the grassroots. Alas, I only just found out about this conference. I don’t know how I missed it, but miss it I did.

“Tough luck,” you might say, and at first blush I would have agreed with you. But the more I thought about the matter and closely reviewed the panorama of presentations, the more I came to realize that something larger was afoot than my absence from the proceedings: the conceptual and theoretical presence of American Jewish minhagim. It struck me that American Jewry’s relationship to ritual practice, authority, language and material culture — the stuff of minhag — was given short shrift. Of more than 30 papers, a scant three trafficked in the subject. And of the three, one focused on the memorialization of the Holocaust.

A consequence of scheduling, perhaps? A casualty of the conference’s call for papers, which was not circulated widely enough within the circles in which scholars of American Jewish history and culture travel? A possibility, sure. But my hunch is that this omission goes deeper still and that it is a reflection on how the formal discipline of Judaic studies is constituted as well as a value judgment.

In both instances, American Jewish studies comes up short. In the conceptual scheme of things that is Judaic studies, America’s Jews are the proverbial poor cousins. Not economically, of course, but symbolically. They just don’t cut the mustard, to use a colloquial American expression. The texture, color and meaningfulness of their experiences are commonly thought to pale in comparison with those of their Old World counterparts who suffered through centuries of persecution, exile and destruction. Standing outside the experiential frame of Jewish history, American Jewry stands outside its temporal frame, as well. When it comes to the longue duree, the sweep of time, American Jews are veritable Johnny-come-latelies. Their history seems to lack heft.

The second-class status of American Jewish studies is also a function of familiarity, which, as the old saw would have it, breeds contempt — or, at the very least, a dismissive wave of the hand and a cold shoulder. Many of the practitioners of Judaic studies, born and bred in North America, look down at American Jewish culture because they are all too familiar with its idiosyncrasies and crotchets. There are exceptions, to be sure. But taken as a whole, those who earn their keep teaching, researching and publishing books about the Jews are inclined to look elsewhere for intellectual stimulation, affirmation and the right set of credentials. Their studied avoidance or marginalization of American Jewish history would suggest that, apart from jokes, it has little to teach us.

I beg to differ. What American Jewish history and culture offer is a brand-new and challenging context in which to situate the study of the Jews. If you’re sociologically inclined, you might call it a paradigm shift. Here, in all its complexity, is the crucible in which to explore the consequences of affluence, the speed of change, the push and pull of freedom, the weight of choice and possibility, the role of bigness and newness, the seesawing between tradition and improvisation. And that’s just for starters. Factor in race relations and immigration and consumer culture and the sheer scale of things in the New World, and you just might begin to see why the scholarly pursuit of American Jewish history and culture should be applauded rather than minimized.

Years ago, on the eve of the Civil War, Rabbi Isaac Mayer Wise was inspired by the novelty — and the possibility — of America to produce a prayer book, which he hoped would at once standardize the liturgy, unify America’s Jews and render them a distinctive presence. It is not for nothing that he called it “Minhag Amerika.”