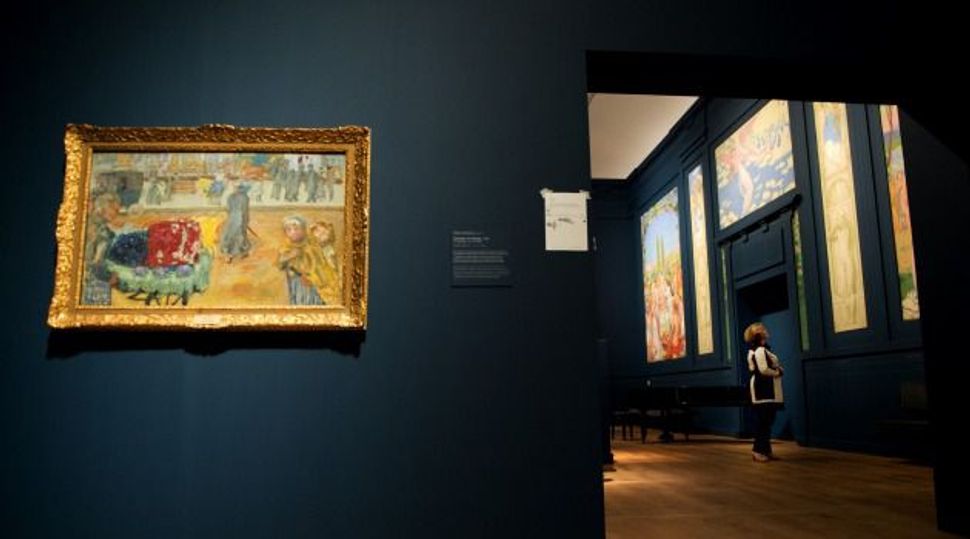 Past Impressions: Pierre Bonnard is one of the ?Nabis,? whose work is on display at the Hermitage Amsterdam museum. Image by Getty Images

A major art exhibition that opened in September at the Hermitage Amsterdam museum features works by three post-Impressionist French painters: Paul Gauguin, Pierre Bonnard and Maurice Denis — the first two better known to the general public than the third. They were, according to the museum’s press release, “briefly united with a few other artists… under the name of Les Nabis, after the Hebrew word for ‘prophet.’ These young artists explored fascinating artistic paths. Unlike the Impressionists, who aimed primarily to capture the fleeting qualities of natural light, the Nabis emphasized color, feeling, symbolism and imagination.” The Nabis — who also included such painters as Paul Sérusier, Paul Ranson, Puvis de Chavannes, Edouard Vuillard and others — loosely adhered as a group through the last decade of the 19th century, after which they went their separate ways.

I’ve often wondered about the origins of the term “Les Nabis,” which has been explained in different ways. It’s been said, for instance, that it came from one or more Jews in the group — yet not only, as far as I can tell, were there no Jewish painters among the Nabis’ prominent members, but any Jew with a knowledge of Hebrew would have said “navi,” as the word for “prophet” is pronounced by Jews, not “nabi.” The spelling “nabi” is found only in modern biblical criticism, an almost entirely Christian pursuit until well into the 20th century. The reason for this is that the Hebrew character bet, with which the word navi is spelled, can be pronounced either “b” or “v,” the choice being determined by rabbinic tradition and certain grammatical rules. Christian scholars, not accepting of this tradition and uncertain of whether these rules already applied in biblical times, preferred to stick in their transcription of biblical Hebrew with bet’s primary value of “b.”

Elsewhere, you’ll find “Nabis” attributed to the French poet Henri Cazalis who according to Oxford University Press’s “Grove Art Outline” was a “Hebrew scholar” — which, however, I’ve been unable to find any evidence of his being. Art historian Jane Mayo Roos, on the other hand, quotes Maurice Denis (a fervent Catholic who ended up joining the anti-Semitic right-wing political movement Action Française) as crediting Paul Sérusier with the term. “He [Sérusier],” she quotes Denis as saying, “gave us a name that, in respect to the studios, made us initiates, a sort of secret society with mystical tendencies, habitually in a state of prophetic fervor….”

This could, of course, be so, but it leaves one wondering where Sérusier, who also was no Hebraist or biblical scholar, came across the word. The probable answer, I think, lies with a figure who was neither a painter nor associated with the Nabis but was a Hebraist and scholar: the renowned French biblical critic, Semiticist and historian Ernest Renan (1823–1892). Renan was a major figure in the French intellectual life of the second half of the 19th century, his most popular work being his “Vie de Jésus” or “Life of Jesus,” published in 1863. In this book, writing about Jesus’ Jewish background, he drew a sharp distinction between the biblical institutions of priesthood and prophecy, writing:

“The Hebrew priest did not differ much from the other priests of antiquity. The character which essentially distinguishes Israel among theocratic peoples is that its priesthood has always been subordinated to individual inspiration. Besides its priests, each wandering tribe had its nabi or prophet, a sort of living oracle who was consulted for the solution of obscure questions supposed to require a high degree of clairvoyance. The nabis of Israel, organized in groups or schools, had great influence. Defenders of the ancient democratic spirit, enemies of the rich, opposed to all political organization, and to whatsoever might draw Israel into the paths of other nations, they were the true authors of the religious pre-eminence of the Jewish people.”

“The Life of Jesus,” one of the first works by a Christian biblical scholar to stress Jesus’ Jewish roots, was a best-seller in France and went through many editions. Cazalis may very well have read it; so might Sérusier; so might other post-Impressionists, such as Gauguin — a political radical who, with anarchist sympathies in his younger years, would have particularly liked Renan’s description of the Israelite nabi. Any one of the group’s members might have mentioned it to one or more of the others, and the word could easily have caught on, whether initially spread by Cazalis, Denis or someone else.

As a Jew, unfortunately, one can’t take any great pleasure in this. Despite his positive appraisal of the biblical prophets, Renan was not an admirer of Judaism, and “The Life of Jesus” ultimately argues that Jesus became what he did by casting off its influence. An espouser of racialist, though not vulgarly racial, theories, Renan came to hold that the Semitic mind was a limited and confined one, and that there was a “racial hierarchy of peoples,” at the apex of which stood the nations of Europe. Probably none of the Nabis knew or cared enough about either biblical religion or Judaism to agree or disagree with him. They just liked the word and what they thought it stood for.