In Ramsgate, Searching For the Legacy of Sir Moses Montefiore 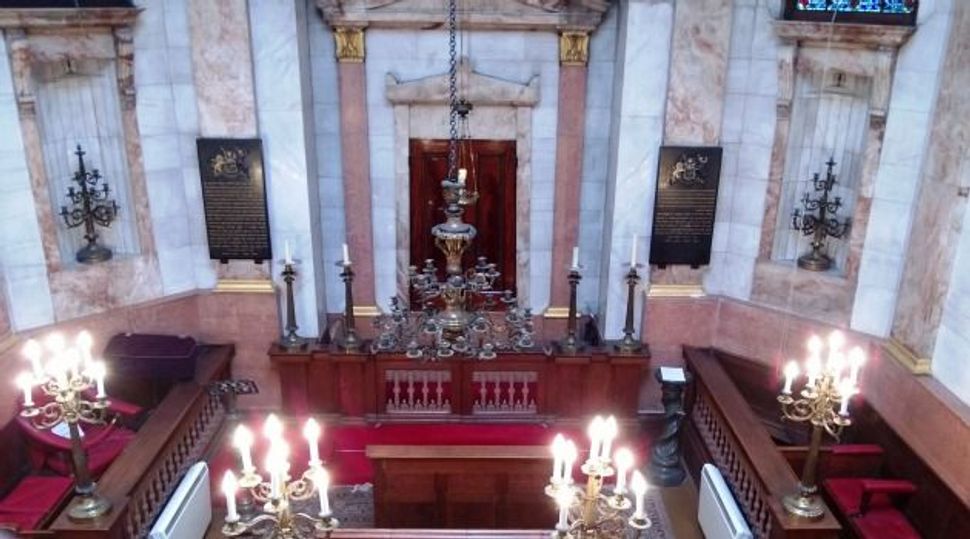 Walking around the depressed Ramsgate of today, it is somewhat difficult to imagine that when the financier Sir Moses Montefiore purchased a country estate here in 1831, this seaside settlement was considered the height of sophistication and chic.

Located on a far easterly point of the Kentish coast of England, bereft of the holidaymakers that would have kept the place alive before the age of the package holiday, Ramsgate has a feeling of neglect and decay about it now — shuttered shop fronts and dank arcades. It is the sort of place that Morrissey had in mind when he sang of the coastal town that they forgot to close down.

But during the late Georgian period when Montefiore was establishing himself in Ramsgate, England’s coastal towns were beginning to take off, a trend hastened by the coming of the railways. Among the well heeled, the idea that taking dips in England’s forbidding waters or gulping down the cold, salty sea air could be restorative became a health fad. Ownership of a seaside pile, meanwhile, was an essential sign of status.

Montefiore’s residence, East Cliff Lodge, was demolished in 1954 after it fell into rack and ruin, yet what remains of his presence in Ramsgate is quite extraordinary. In August 1831, construction began on a synagogue on the grounds of his estate, a personal synagogue in the manner of the estate chapels built by the Christian aristocracy, where Montefiore appointed the rabbi and chose the psalms.

Inaugurated in June 1833, the synagogue — situated in the middle of a thicket — is small and simple in structure, rectangular with a semicircular space made to accommodate the Ark. Its exterior walls are whitewashed, and on the front of the building is a blue clock with golden hands and numbers, under which is inscribed a motto: “Time flies. Virtue alone remains.” As English Heritage, an organization responsible for the preservation of historic landmarks, asserts, it is the only such example of a chiming clock in an English synagogue.

Inside, the hall lined with granite, marble and plush red fabric is lit by way of an octagonal dome made of red and clear glass, with stained-glass windows of blue, red and green at the level of the gallery (a later addition), as well as a single chandelier and several candelabra. Above the Ark is a small, circular window depicting the Ten Commandments, and on either side are plates displaying the family coat of arms. Upon one of the walls is a plaque inscribed with a prayer to “our most gracious Sovereign King George, our gracious Queen Mary,” as well as to the Queen Mother and Edward, the Prince of Wales.

Adjacent to the synagogue is Montefiore’s final resting place, a white, square mausoleum with a domed roof, built to replicate the appearance of Rachel’s Tomb on the road to Bethlehem, a site his wife, Lady Judith Montefiore, had restored and repaired in 1839. Sir Moses and Lady Judith Montefiore are buried side by side in the mausoleum — she on the left, he on the right — facing east toward Jerusalem in identical tombs clad in marble.

In the absence of a substantial Sephardic Jewish community in the vicinity, the Montefiore synagogue is no longer active. It is without a rabbi, and all but one of its Torah scrolls have been relocated to London; the remaining scroll is no longer in usable condition. Haredim from Stamford Hill in London, who in any case arrange their own services, do use the synagogue for worship, if only on occasion. The Thanet & District Reform Synagogue serves the needs of the Jewish community in Ramsgate.

At the same time, the Montefiore family has expressed a wish that the two bodies be exhumed with the purpose of reburying them in Jerusalem. After all, their connection to that city is legend, Montefiore having funded the construction of the first Jewish neighborhood outside the Old City, Mishkenot Sha’ananim, as well as the windmill of Yemin Moshe, which was recently restored.

After the reopening of that windmill last year, Montefiore’s great-great-nephew, the historian and novelist Simon Sebag Montefiore, told The Jewish Chronicle: “I had a conversation with the Prime Minister and I told him that a lot of the family thought it was about time that Sir Moses was brought back to Jerusalem. He came to Jerusalem seven times. Now he can go home.” He explained that it was becoming “an increasing struggle” to maintain the synagogue and mausoleum, noting the absence of “viable Jewish life.”

The local authorities and those charged with maintaining Sir Moses Montefiore’s heritage in Ramsgate, however, fiercely resist such plans. “The Ramsgate Montefiore Heritage protests most strongly against any proposal concerning the removal of Sir Moses and Lady Montefiore from their last resting place in Ramsgate, the place where they chose to be buried,” the organization said in a statement.

Meanwhile, 180 years after its initial dedication in the presence of both the Ashkenazi and Sephardic chief rabbis, the synagogue and mausoleum remain open to visitors on an irregular basis. B’nai B’rith UK organizes open days for the general public, staffed by a guide. The rest of the time it is shut, open only upon request. Still, it is a captivating monument, not only as a tribute to Sir Moses Montefiore, his imagination and his contribution to Ramsgate, but also as a relic of a time in the 19th century when the English aristocracy and Jewish upward mobility collided, producing this most exquisite building.

Liam Hoare is a freelance writer based in the United Kingdom. His work on politics and literature has been featured in The Atlantic and in The Jewish Chronicle.

In Ramsgate, Searching For the Legacy of Sir Moses Montefiore