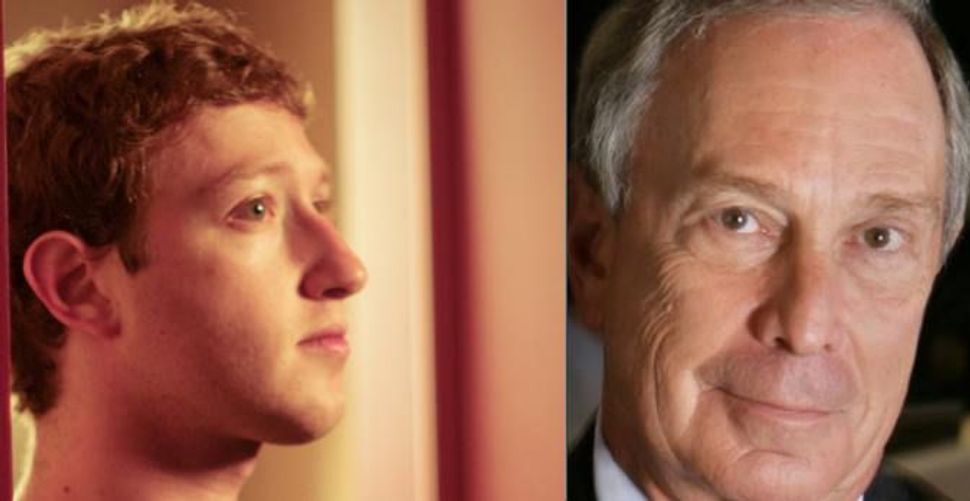 “I can’t believe they gave the Genesis Prize to that tiny tiny man,” the founder, CEO and control-freak-in-chief of YouFace spluttered while sipping a latte from a Starbucks in San Francisco, a small town he owns in Northern California.

“I mean, it’s not like he, needs the money. Those of us who have got barely $18 billion to scrape together are the ones who really need this sort of financial incentive.” The Silicon Valley supremo’s reference to chai billion was just a sly dig at Michael Bloomberg who was this week named the $1 million prize-winning recipient of a prize given by Russian oligarchs to inspire young Jews to social excellence and innovation.

The award of $1 million was nominally to honor Bloomberg’s philanthropy, though it isn’t clear whether it was for the charity that starts at his New York, Bermuda or $20 million London home. Bloomberg’s obvious altruism did little to calm the Californian ire.

“I know I’ve been maybe even more agnostic about my Jewish heritage than hizzoner, but does $100 million to help the Newark schools system that produced Philip Roth count for nothing? I mean Mikey gave $1.1 billion to the alma mater of Woodrow Wilson and John “Decimal” Dewey — does it get any more goyishe than that?”

The creator of the world’s premier global social network continued his diatribe in a manner reminiscent of Jesse Eisenberg faced with an incompetent reporter.

“What do they want from me, ambivalence?” He said, turning to his wife, Priscilla Chan. “While Bloomie’s been fiddling in meatspace, I’ve linked billions of people, including millions of Jews and Jewish organizations together in entirely innovative ways that let them know not only when and where important events are happening, but also how to grow virtual kosher crops and how to buy presents for birthdays of Jewish friends of friends.”

“I’m building the Jewish future, not dealing with an aging immigrant legacy. The Jews of YouFace are younger and more virile than the Jews of the Big Apple,” said the 29 year old native of White Plains, NY. “I know that the prize is intended to generate interest in contemporary Jewish rôle models but why would a bunch of oligarchs and right wing politicians want the prize to go to someone whose idea of tikkun olam is to turn Manhattan into a playground for the 1% and the NYPD into the KGB?”

“Perhaps a legacy of ‘Stop and Frisk’ is what they are trying to encourage,” he added, “or other aspects of his enlightened attitudes to women.”

Sergey Brin who was brought to America aged 6 by the Hebrew Immigrant Aid Society and who went on to found Google and marry Jewish biotech analyst Anne Wojcicki was not available for comment.