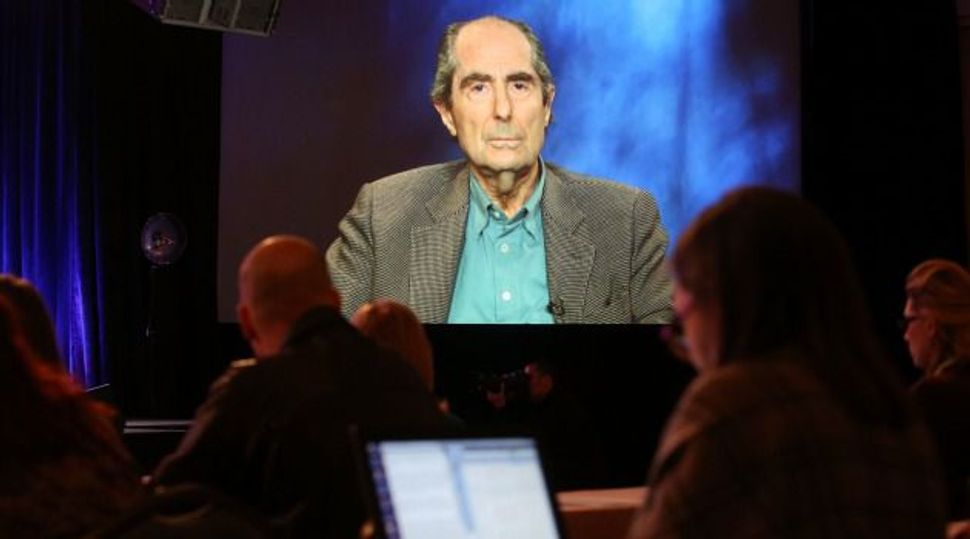 Roth Unbound: A Writer and His Books
By Claudia Roth Pierpont
Farrar, Straus and Giroux, 384 pages, $27

Now that Philip Roth has quit (or “quit,” depending on the degree to which you find his retirement announcement believable) writing, the oeuvre assessments have begun. One of the first is Claudia Roth Pierpont’s “Roth Unbound.” Subtitled “A Writer and His Books,” it has the rather lofty mission of examining “Roth’s development as a writer, considering his themes, his thoughts, and his language.” And, because Roth’s work often tends towards the autobiographical, it dips, of necessity, into “the life that has so often served the work.”

Middle name aside, Pierpont is not, as she is quick to note, related to her “celebrated subject,” but they do share nearly a decade of friendship, which began when Roth sent Pierpont a letter and some clippings after a story she wrote about the anthropologist Franz Boas ran in The New Yorker where Pierpont works as a writer. Soon, she became one of Roth’s readers, a trusted friend from whom he solicited opinions on his writing before publication. (Another such friend and reader is Judith Thurman, so perhaps Roth has a thing about ladies who write for The New Yorker.)

They spent time together, talking about Roth’s work. Though Pierpont had nothing particular in mind project-wise, she meticulously “tried to keep track of everything he said.” That task was pleasant enough: “Roth,” Pierpont assures the reader in her introduction, “is a brilliant talker… he’s as funny as you might think from his books,” and she realized, from the start of their acquaintance, what “an extraordinary privilege” it was to talk to Philip Roth about Philip Roth.

The book that resulted from these conversations is half-compelling, half-frustrating. Pierpont flaunts her access to Roth and his papers, liberally leavening her appraisals of the novels with a “Roth tells me now” or a “Roth’s notes reveal” or some variation thereof. But she is also careful to avoid the appearance of seeming too close, often giving the impression of taking a critical view of some of the work.

She breaks no real new ground here: In so far as “Roth Unbound” is an examination of Roth’s themes, it will hardly strike anyone who has so much as heard about, let alone read Roth that he is interested in Jewishness, in how Jewishness intersects with, blends into and sticks out of Americaness, in history, histories and counter histories. Nor is anyone who would be likely to read a book about Roth’s work unlikely to know at least some of his early history: the time he spent in Newark and Weequahic and the scandal of his early (and his later) work. Pierpont’s oft-repeated point that Roth’s novels are an alchemy of fact and imagination, personal history poured into the blender of “what if?” is neither particularly shocking nor especially enlightening, though.

On the other hand, given some of the accusations Roth has encountered over the course of his writing career, the inclusion of this argument may perhaps be necessary. (Roth himself has made the point vociferously in his fiction, often through his writer-protagonist Nathan Zuckerman, whose travails are extensively covered in “Zuckerman Bound: A Trilogy and Epilogue.”)

She is critical of the work, calling out failures, as with “Letting Go,” Roth’s Jamesian first full-length novel, “The Breast,” which introduces David Kepesh and invokes Kafka in metaphor, if not in quality, “Our Gang,” Roth’s satirical but too broad attack on Nixon, and “I Married a Communist,” the oddly flat middle part of the so-called “American Trilogy,” bookended by the triumphs of “American Pastoral” and “The Human Stain.” But she is mostly in accordance with mainstream critical reception.

All the same, Pierpont is an attentive reader of Roth’s work: that she is a fan and an advocate is, at moments, a tremendous asset. And she is downright eloquent about those books she most ardently admires: Her chapter on “Sabbath’s Theater,” which extols Roth’s use of language in the creation of Mickey Sabbath and his lover Drenka, is a kind of meta-exegesis, in which her own language rises to the heights she is describing in Roth. That is, until she overreaches, likening Roth’s treatment of Time (the capitalization is hers) to Proust’s. This after earlier submitting that “[a]s a novelist, Roth is more psychologist than poet.”

Pierpont is also particularly passionate, though less successful, in defending Roth against the accusations of woman hatred consistently leveled at him by, in Pierpont’s telling, “feminists” and female reviewers. She is adamant that Roth does not hate women, that in fact his female characters, including the harridans, like Lucy Nelson in “When She Was Good” and Maureen Tarnopol in “My Life As a Man,” are simply as complicated as the men they make suffer.

Pierpont links both Lucy and Maureen to Margaret Williams, Roth’s first wife, a woman he married after she told him she was pregnant and planned to leave the child on his parents’ doorstep, in exchange for an abortion, only to find, some years into the marriage, that she had never really been pregnant at all. Anyway, Pierpont assures the reader, Roth could not be a hater of women because “[h]e considers himself a man who loves women, and he counts many women among his close and lifelong friends.”

I actually don’t think Philip Roth is a misogynist. Or at least I didn’t until I read that he couldn’t possibly be one because he has female friends.

“Roth Unbound” takes its title from an early Zuckerman book, “Zuckerman Unbound,” the 1981 novel exploring the relationship between a writer and his work. “Roth Unbound” tackles the same concerns, but I’m not sure it adds much to the exploration. And yet this criticism is in itself a testament to Pierpont’s “celebrated subject”: So good a writer is Roth, so good a thinker when it comes to his writing, that the most poignant, accurate and piercing of what might be said about his work has already been amply said by him, even if only in fiction, or perhaps because only in fiction.