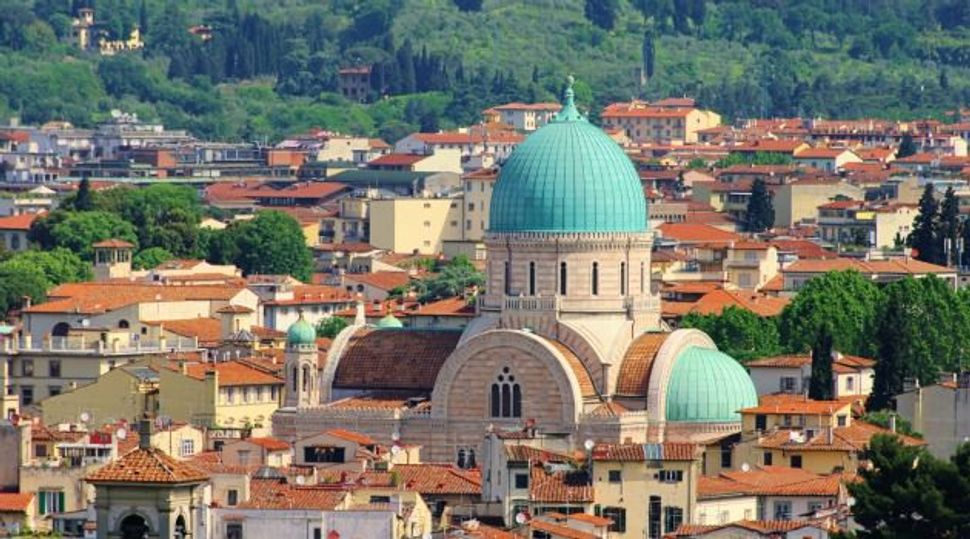 A Dome Away From Home: Dedicated in 1882, Florence?s synagogue is a monument to 19th century Jewish emancipation and a grand example of Moorish style architecture, with a soaring arched façade and two slim side towers. Image by Thinkstock

If you look out over Florence from Piazzale Michelangelo, high above the Arno, two domes catch your eye. One is Filipo Brunelleschi’s masterpiece, the immense ribbed dome of the Duomo. The other, off to the right, is much smaller but in its way also distinctive: It is the tall, bright green copper dome of the Florence synagogue.

“Anyone who looks at the Florence skyline sees the Duomo and the synagogue,” said Enrico Fink, a musician and actor who last December took up the post of cultural affairs director of the Florence Jewish community.

Dedicated in 1882, the synagogue is a monument to 19th century Jewish emancipation and a grand example of Moorish style architecture, with a soaring arched façade and two slim side towers.

But while the Duomo is one of the most famous attractions in Italy, visited by millions, the synagogue and the Jewish history of the city remain largely unknown to most Florence residents as well as to the vast majority of tourists.

Fink and other recently installed leaders of the 800- to 900-member Jewish community want to change this. Breaking with past policy, they have embarked on a plan to actively engage with mainstream Florence. They endeavor to make the Jewish community more visible and accessible, demystifying Jews and Jewishness for local non-Jews, while putting Jewish heritage on the local tourist map.

“We want people in Florence to understand who we are, and to understand that the Jewish community belongs to the city, that we are part of the fabric of the city,” community president Sara Cividali, an energetic woman with a mass of silver hair, told me over lunch at Ruth’s, a kosher vegetarian restaurant next door to the synagogue. “It isn’t assimilation; it’s different, it’s participation,” she said.

This new strategy was launched this summer with the Balagan Café, an unprecedented experiment in outreach that turned the synagogue’s palm-shaded garden into a mini-Jewish culture festival almost every Thursday night from June through August. Balagan, more or less, means “chaos” — and, said Fink, the idea behind calling the summer’s experiment “Balagan” was “an acceptance of confusion that’s not easy to define.”

Each Café featured music, lectures, discussions, performances and other events. There were free guided tours of the synagogue and stands selling books, CDs, Judaica and Balagan Café T-shirts depicting a full moon over the synagogue dome. Performers and featured participants included nationally known figures such as the rock singer Raiz, the Tzadik label klezmer jazz clarinetist Gabriele Coen, and the architect Massimiliano Fuksas, who designed, among other things, the Peres Peace House in Israel.

Meanwhile, food stands sold kosher meals and kosher wine to crowds eager to sample couscous, baked eggplant, beans with cumin and harissa, spicy chickpeas, Roman-style sweet and sour zucchini and other specialties. One evening saw a “competition” between Sephardic and Ashkenazic cooking; another featured a lesson in challah-making.

“I believe that there is no life for the Jewish community in the future unless that life becomes part of the life of Florence,” said Fink, who was the prime mover behind the project. “I’m not afraid that the Jewish community will die, but it needs to be part of what happens around it.”

The idea of the Café, therefore, was not just to entertain with concerts and aperitifs, but, he said, to serve as “a way to start building relations between the town, the synagogue and the Jewish community — and that’s what happened.”

About 300 people turned up for the first Café in early June — most of them Jewish community members and their friends. But each week the numbers grew, thanks to enthusiastic local media coverage as well as word of mouth.

“It conquered the city,” journalist Fulvio Paloscia wrote in La Repubblica. By the summer’s last Café, on Aug. 29 — where I was featured in a public conversation with Fink about Jewish culture and mainstream society — the event drew 800 people. Crowds milled about the garden and listened to two concerts, one by a klezmer band and one by Sephardic singer Evelina Meghnagi. They also mobbed the food stand, where some 450 kosher meals were sold.

Retired computer systems operator Giuseppe Budillon told me he came every week. “I am Christian but I am attracted to the Jewish community,” he said. “This Café Balagan is doing a lot.”

In sharp contrast to other days of the week, security seemed minimal — people could enter with their phones, cameras and backpacks. Cividali said this, too, sent a message. “Security can’t impede us from living,” she told me. “And I feel that the more open we are, the safer we are, as the synagogue and garden are felt to belong to the city.”

Renzo Funaro, vice president of the Foundation for Jewish Heritage in Italy, called the Café “a cultural revolution.” It was, he told me, “the first time that the Jewish community’s garden became an element of Florentine culture.”

What’s more, unaffiliated Jews who had had nothing to do with organized Jewish life in Florence also began turning up, thanks to the buzz. And volunteers came from as far away as Siena each week to help.

The question for the community now is where to go from here. “The success this summer has paved the way for future activities,” Fink told me. Plans for new initiatives this fall and winter, Fink said, could include a “Balagan Shabbat,” or open Shabbat dinner on Friday nights, as well as smaller indoor events such as book launches.

The non-Jewish Florence mainstream, Fink said, “now perceives this as a place they can expect to come to — not somewhere that is fenced off. This creates a better situation for everyone.”

Ruth Ellen Gruber is a frequent contributor to the Forward.