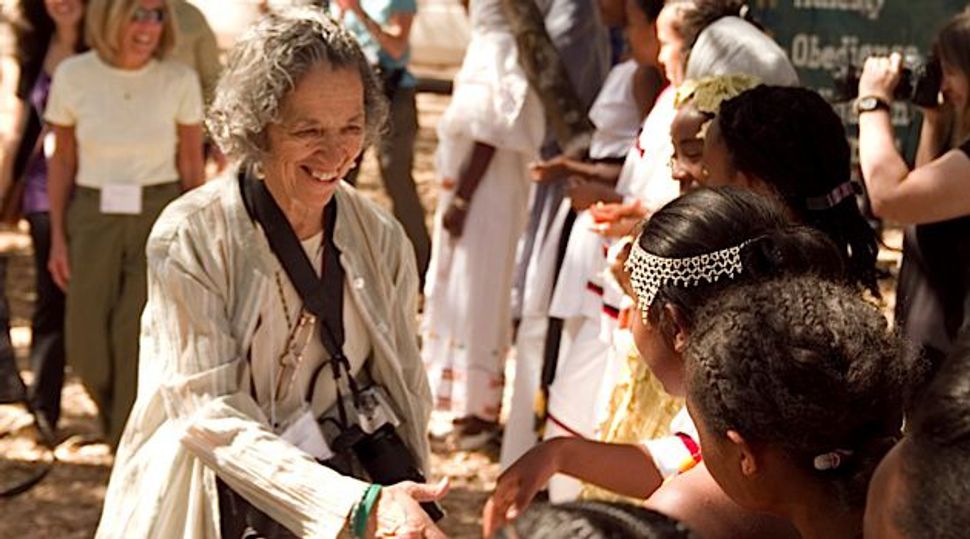 In the Field: American Jewish World Service chief Ruth Messinger traveled to Ethiopia in 2011; Image by Courtesy of AJWS

One or more nights a week, a lofty-ceilinged prewar apartment on the Upper West Side of Manhattan becomes an unexpected nexus of feminist Jewish social justice power.

That’s what happens when the heads of two of the country’s major Jewish philanthropic organizations — Ruth Messinger, president and CEO of American Jewish World Service and Marilyn Sneiderman, executive director of Avodah: The Jewish Service Corps — find themselves together in the home that they share part time, chatting about the other big thing they have in common: their mission.

“We’re pitching the same story: How do you grow Jewish social justice?” says Messinger one warm Wednesday night in late October as she relaxes in the living room, thumbs through her mail, and snacks on potato chips and Diet Coke with lime — she says the food at her evening event earlier was “too healthy.”

Sneiderman perches on a chair nearby. Messinger, 73, owns the apartment with her husband, Andrew Lachman, but since he works in Connecticut as the executive director of Connecticut Center for School Change, and she frequently travels for AJWS’s international humanitarian work, the place has become something of a way station for both family members and members of her extended family of progressive Jewish leaders. 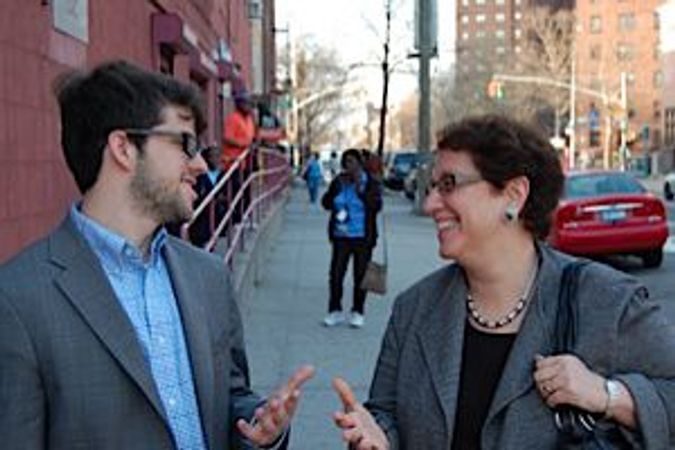 Avodah head Marilyn Sneiderman chatted with a corps member in 2012. Image by Courtesy of Avodah

Messinger’s granddaughter, another roommate, wanders in and they joke about needing a calendar for the apartment to determine who’s there when. Perhaps the calendar would hang near the stunning wildlife and landscape photos from around the world that line the entryway. (“Ruth took those herself!” Sneiderman tells me.)

“There’s logic to having someone here,” Messinger says, explaining why she offered Sneiderman, 57, a place to stay in New York City while she maintains a home in Washington, D.C. “Marilyn was a hugely accommodating person given that she’s not 19. She doesn’t mind backpacking up here.”

Both women leaders crossed over to the Jewish philanthropic sector from the mainstream progressive world, where Messinger was a politician, most notably a Manhattan borough president who challenged Rudy Giuliani for mayor in 1997 and lost, and Sneiderman, a labor movement leader in D.C.

“It was a huge transition for me, a totally different set of players, circumstances and opportunities,” says Sneiderman of the move in 2010 to Avodah, and to Messinger’s apartment three nights a week. “Ruth played this incredible mentorship role with me.”

Messinger remains in that role even as her home functions as Sneiderman’s part-time pied-à-terre. She is visibly eager to talk up Sneiderman’s accomplishments as the first director to take the helm after Avodah’s founder, Rabbi David Rosenn, stepped down. “Avodah has grown its budget 50 percent over past three years — that’s pretty exciting!” Messinger tells me, emphasizing how hard it is to steer a nonprofit in the first years after its founder departs.

Sneiderman commutes up from her home in Washington, D.C. and stays in the city from Monday night to Thursday, splitting her weekdays between the D.C. and New York offices of Avodah. This arrangement enables her to put down some roots on the Upper West Side while also staying firmly anchored in the D.C. community she considers her own.

She says she feels “so blessed” to have the best of both worlds. She can, for instance, host her fabled Yom Kippur break-fast meal at her home in D.C.’s Shepherd Park neighborhood, a festive potluck attended by Jews, progressives and neighbors alike. But she can also discover New York’s surprisingly intimate side: She is amazed by how often she bumps into friends while walking down Amsterdam Avenue, and how readily people on the subway offer her directions when she needs them.

This year, both Messinger and Sneiderman’s organizations are embarking on ambitious new projects. Avodah is launching an early-career fellowship that will offer skill-building, mentorship and leadership development opportunities for young people already working in anti-poverty efforts. Meanwhile, AJWS is preparing a campaign to combat gender- and sexual orientation-based violence around the globe, focusing its work on the many countries where being gay, or engaging in gay activity, carry criminal penalties and social stigma.

Both leaders say that they have found that the passage into new frontiers at work is eased when they can come home and talk shop. But as tempting as it is to picture them settling down together for hours of Seinfeld reruns over a platter of bagels and discussion of ending oppression everywhere, their time together typically entails snatches of collaboration and idea sharing late at night after they’ve both been working for hours.

“We’re not the kind of people who ever have a coherent schedule,” jokes Messinger. “But it’s useful to share ideas and advice. The burnout rate in this line of work is high so we talk about how do you sustain people, support them, nourish them, keep them involved?”

“Change processes are hard,” agrees Sneiderman. “There are always folks who say ‘Please don’t change things’ and others who say ‘We need to change with the times.’”

The pair also loves to discuss big picture issues, such as the structural injustices they are dedicated to combatting, from poverty at home — Avodah’s primary focus — to social injustice and violence both at home and abroad, that of AJWS.

“From our collective point of view, there’s nothing surprising in the Pew study,” said Messinger, referring to the recent survey that found an uptick in the number of Jews identifying as culturally, not religiously Jewish. “There are a lot of different ways to be Jewish in the world!”

Besides using each other as sounding boards, Sneiderman and Messinger also rely on a mutual network both formal and informal. Formally, they are both part of the Jewish Social Justice Roundtable, a coalition of different social justice organizations and publications.

“At the Jewish Social Justice roundtable the norm is: if we’re helping each other we all get stronger,” said Sneiderman.

“As opposed to the infighting that there is in other cultures, these are the folks who want to help Avodah, and me as the head of it, succeed.” There’s also, says Sneiderman, a more informal “group of women leaders that are extraordinary.”

“It’s a little sad,” says Messinger. “Women are taking over hospitals,universities, and pulpits as Rabbis. But this is not yet happening in positions of leadership in the Jewish community, which is not as it should be.”

Their solidly feminist belief in supporting each other and nurturing other female leaders creates yet another strong ideological bond. And then there are the little things that arise simply from occupying the same living space. For instance, Sneiderman broke her long time ban on handling meat to take a delivery from Grow and Behold, a Kosher and pasture-raised meat company, upstairs and put it in the fridge for Messinger. Messinger had asked the favor without realizing the extent of Sneiderman’s vegetarianism.

And then there are the bouquets. “Marilyn brings me flowers every week,” Messinger says with a laugh. “My husband says, ‘She has taken on the role that I would never play.’”

Sarah Marian Seltzer is a journalist and fiction writer and a contributor to the Sisterhood blog. She tweets at @sarahmseltzer