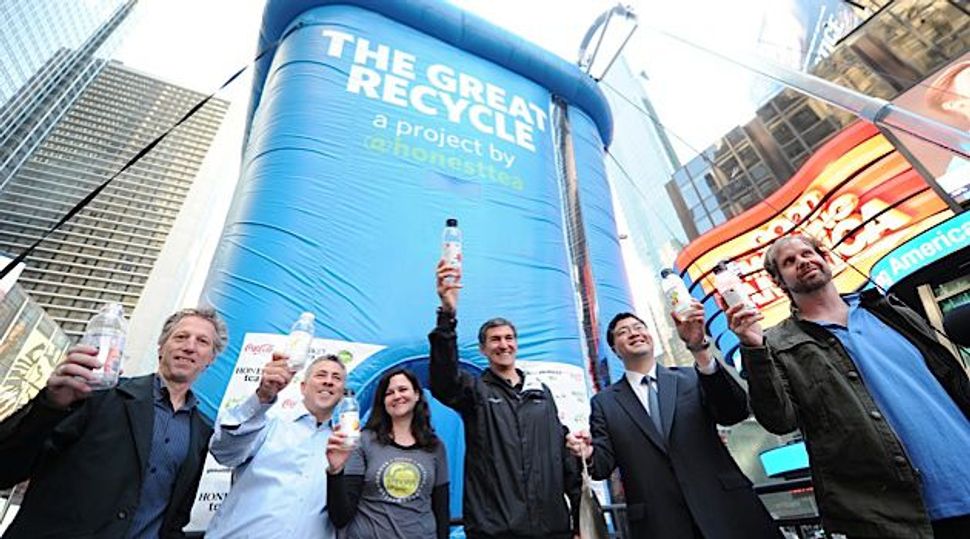 It all started with a jog.

On a business trip to New York in 1997, Seth Goldman went for a run in Central Park.

Afterwards, he couldn’t find a drink to quench his thirst. Everything on store shelves was either too sweet or loaded with artificial ingredients.

So it got him to thinking about an MBA class he’d taken at Yale University three years earlier, where the subject of creating a less sweet beverage business had come up. Goldman contacted his old professor, Barry Nalebuff, and asked if anything ever came of that.

The short answer was “no,” so the pair decided to try to create a tea that had sugar levels that fell somewhere between no sugar and the very sugary industry standard.

The result: Honest Tea. They shared their experiences — warts and all — in their new book, “Mission in a Bottle: The Honest Guide to Doing Business Differently — and Succeeding.”

Their concept, outlined in the company’s mission statement, went beyond using less sugar in their products. The pair wanted to sell a natural tea, and do it in socially responsible way, by using fair trade ingredients, operating in an ecologically sustainable manner, and supporting a variety of charities.

A common plea to donors in charity circles is to give until it hurts, Nalebuff, 55, said. “My father had a line I am particularly fond of. He said you should give until it feels good, which is apparently after it hurts.”

He added: “We support everything from Race for the Cure to the Susan Komen Foundation. We’re building computer centers in India for the children of tea pluckers.”

For Goldman and Nalebuff — and therefore for Honest Tea — philanthropy means more than just giving away money or free bottles of tea, which they often do at charity events.

“I associate the word tzedakah with tzedek, which is righteousness,” Goldman said. “In the long term, that’s much more powerful [than just giving charity]. There’s a great phrase in the Talmud, ‘Justice shall you pursue.’ It’s not just that you pursue justice, but how you pursue it is equally important.

“If we have a company selling an unhealthy product and give away all or half our profits to charity we would only be pursuing half the commandment.”

The desire to do good helped Honest Tea get off the ground. Goldman’s first sale was to Whole Foods Market, a supermarket chain with a similarly altruistic mission. In fact, the buyer there, impressed by the founders’ passion, made a significant commitment to Honest Tea before Goldman and Nalebuff had a factory or were even certain they could produce their teas in substantial quantities.

The motivation to do good also attracted investors. Jeff Swartz, then the CEO of the Timberland Company, was an early one: “What attracted me specifically was that Honest Tea didn’t do philanthropy. Rather, they sought to integrate doing well and doing good, a philosophy I tried to live by at Timberland,” said Swartz.

Honest Tea’s commitment to altruism sometimes trumps the company’s sense of competition. For example, Honest Tea’s children’s drink, Honest Kids, is just 40 calories, compared with the 100 calorie industry norm. When competitors followed suit (though no one dropped their caloric count all the way down to 40), Honest Tea didn’t consider it a threat but a victory.

“Millions bought Honest Kids and 100 million bought theirs,” Nalebuff said. “We set the example that it’s possible to buy a less sweet version of a kid’s pouch.”

Moreover, Honest Tea didn’t stop there. It was impossible to recycle the pouches because they contained a foil liner that couldn’t be separated from the rest of the pouch. So Goldman went another direction — upcycling.

He contacted a company that was able to reuse empty pouches to make things like pencil cases and tote bags. They even made an Honest Kids gown out of the pouches that a young concert pianist wore for her 2008 Carnegie Hall debut.

To get sufficient pouches, Goldman initially set up 100 locations around the country where school groups could bring empty juice containers and agreed to give the schools a 2 cent reward for each pouch.

By the end of 2012, there were 67,000 collection locations and over 140 million pouches that avoided the refuse heap.

And when Kraft Foods wanted in on the upcycling for its brand of pouch drinks, Goldman happily gave his okay — and gave up a marketing advantage.

Goldman believes the company’s philosophy is at least in part due to his Jewish background. “I believe it informs the way we behave as a business. It’s about the idea that we have a commitment to social justice.”

The company has been bought by Coca-Cola, a deal that started in 2008 (when the megacorporation purchased 40% of Honest Tea) and was completed two years ago. The corporate marriage has been a success, “as evident by my continued presence,” says Goldman, who operates the business separately even though it’s owned by Coca-Cola. He maintains his old title — TeaEO — and says, “I’m still enjoying it.”