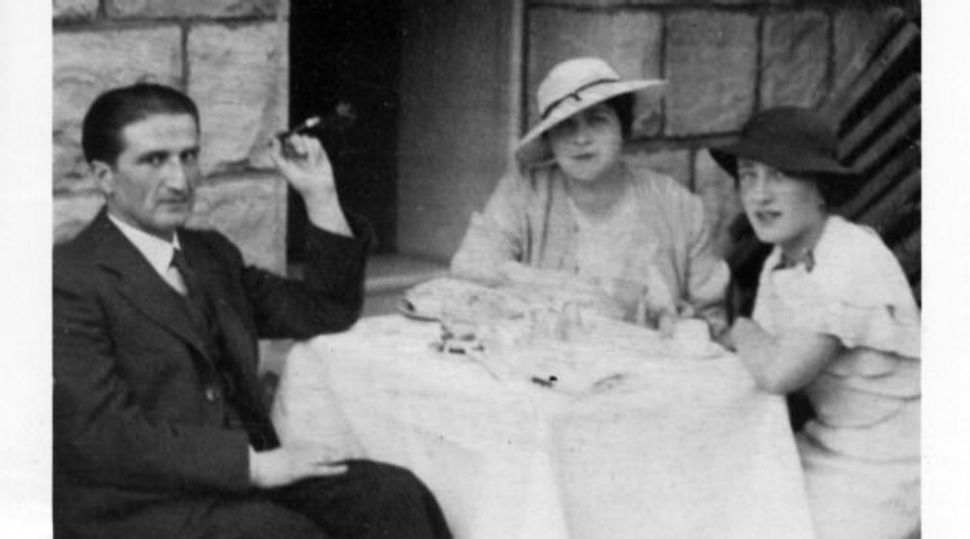 ?Lost? Memories: This 1934 photograph depicts Yehuda Nir?s parents, Samuel and Sidia Grunfeld and Aunt Busia in a café in Poland. Image by Courtesy of Yehuda Nir

‘I will protect you,” a father sings in the opera “Lost Childhood” to comfort his 9-year-old son, Julek The tragic irony is that shortly thereafter, the father, emblematic of so many Jewish men, will be marched out of his Lvov, Poland, home and murdered by the Nazis.

Young Julek, now Yehuda Nir, is a retired psychiatrist on New York City’s Park Avenue. He is professor emeritus at Cornell Medical Center and author of the memoir “The Lost Childhood,” on which the opera is based, On November 9, The National Philharmonic will present the first complete concert performance of the opera, at the Music Center at Strathmore, in North Bethesda, Md., to commemorate the 75th anniversary of Kristallnacht. While composer Janice Hamer and her cousin, poet/librettist Mary Azrael, have collaborated in the past, “Lost Childhood” is their first opera.

The National Philharmonic’s Polish-born maestro, Piotr Gajewski, will conduct the opera. The performance has come about in the serendipitous way that such events generally tend to come together — Gajewski learned about the opera’s existence from his father, who is a survivor of the Warsaw ghetto and resides in the same assisted living facility as Hamer’s parents.

The core narrative begins in 1939, when Nir endured terrible times posing as an altar boy in a story that has as many twists as an action thriller, defying the concept of survivor as passive victim. Armed only with identity papers forged by his sister Lala’s boyfriend, Ludwig Selig, Nir, his mother and Lala passed through the war years, eluding discovery. As Nir has said, his life is a triumph over 1 million Nazis who set out to murder a 13-year-old boy. “Hitler is dead,” Nir asserts, “but I am alive.”

“Lost Childhood” dramatizes the iconic wartime story of Nir’s family, using an invented dialogue between an older version of himself, Judah Grunfeld, and Manfred Geyer, the son of perpetrators. The character is based on Gottfried Wagner, composer Richard Wagner’s great-grandson, who wrote about his disaffection with his family history in “Twilight of the Wagners.”

In an essay written for the November 9 performance, Wagner wrote, “The opera does not attempt to replicate Yehuda Nir’s memoir in music and poetry, but rather uses some of its material to different purpose — a work of art and a plea for dialogue between non-Jewish Germans and Jews living since the Holocaust, and by extension, for resolution through dialogue of current conflicts, human rights violations and genocides.”

Though fiction, the dialogue follows a real-life friendship. Beginning in 1994, Nir and Wagner traveled to psychiatric conferences, publicly discussing the personal difficulties each has continued to struggle with: for Nir, identity and dislocation issues, anger and the desire for revenge, the loss of his father. For his part, Wagner had to deal with a family history that embraced racism — a home where Adolf Hitler was a frequent dinner guest, affectionately dubbed Uncle Wolf. For the opera, Azrael wove in material from interviews with the two men, shifting the emphasis to our time in the present. “The opera is the first to deal with these post-Holocaust issues,” Hamer said in a telephone interview. Her music incorporates Polish-Jewish prewar folk songs, polkas juxtaposed with Nazi anthems and “Nie Sollst Du Mich Befragen” (“Don’t Ask Me From Where I Come”), from Wagner’s “Lohengrin.” The libretto is most unusual for its postwar vision of understanding when forgiveness is not an option.

“Lost Childhood” has been produced in a variety of formats since, including concert readings and piano-vocal workshops, and in a staged workshop in Israel’s Tel Aviv in 2007. In 2010, in celebration of Nir’s 80th birthday, scenes were performed at a lavish party organized by his daughter, Sarah Maslin Nir, a New York Times reporter. His eldest son, Daniel Nir, a financial contributor to the opera’s development, said, “The work combines my father’s double passions: to get his story out and music.” He and his brother, Aaron Nir, following their father’s legacy, will make a gift to the University of Virginia Jewish Studies Program, in memory of both their grandfathers: Yehuda Nir’s father, Samuel Grunfeld, and their mother Eva Herman’s father, Jules Roos. Some of the funds come from Jules Roos’s frozen bank account after the Swiss settled with the World Jewish Congress in 2000.

Recently interviewed, Nir’s psychologist wife, Bonnie Maslin, emphasized the importance of the opera as a vehicle of memory: “Music connects with emotion and therefore is much more powerful than mere history. This opera is a way we get to say Kaddish for untold numbers of people.” She noted another aspect of her husband’s life: An activist, Yehuda Nir went to Israel at the outset of the Six Day War, and to Bitburg, Germany, to protest President Reagan’s wreath-laying visit there. Maslin has established an exhibition hall in honor of Yehuda Nir, child Holocaust survivor, and donated his Holocaust materials to the Gelman Library at George Washington University.

While the opera is now finally fully orchestrated, it awaits its next great moment, in complete dress and scenery; like the memory of the Holocaust, “Lost Childhood” is a continued work in progress.

Regina Weinreich is the author of “Kerouac’s Spontaneous Poetic: A Study of the Fiction,” editor of “Kerouac’s Book of Haikus” and co-producer/director of the 1994 documentary “Paul Bowles: The Complete Outsider.”