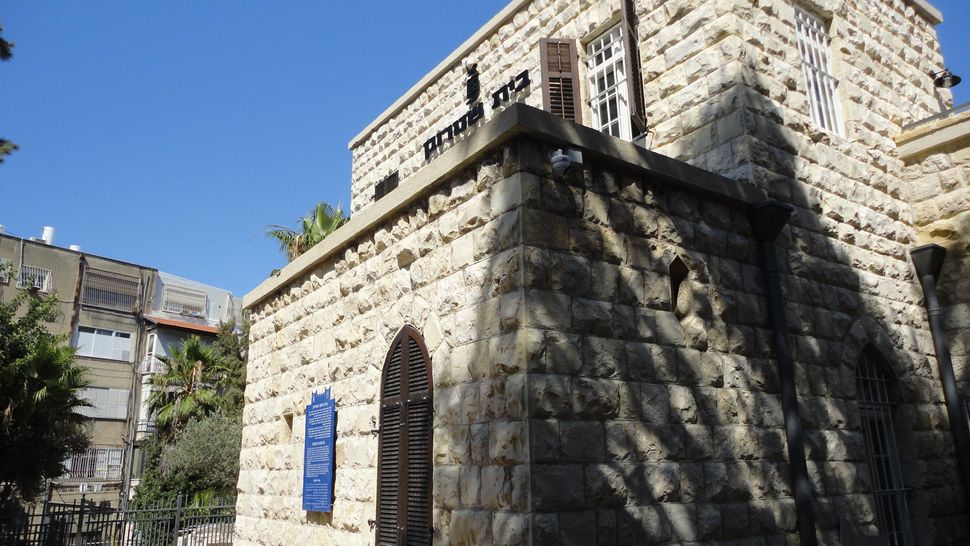 House That Struck Built: A new museum dedicated to the art of Hermann Struck has opened in Haifa. Image by Wikimedia Commons

Just a handful of journalists made the journey from Tel Aviv to Haifa for the opening of the Hermann Struck Museum, a humble tribute to a once well-known print artist and esteemed teacher.

Mostly forgotten in Germany, his country of origin, Hermann Struck emigrated to Haifa in 1922 and played a prominent role in the city’s social and cultural life. The small museum housed in the building Struck once inhabited serves as a fitting tribute.

Two floors of the former Struck House are given over to changing exhibitions of the artist’s works. Placed throughout the rooms are a few standing glass cabinets displaying some of Struck’s sketchbooks and etching tools, an old printing press Struck worked on and a selection of personal effects.

The majority of the works on display have been culled from the Haifa Museum of Art’s collection and that of Nathan A. Bernstein. In the future, the museum hopes to involve other private collectors and to continue coordinating with Ruthi Ofek, head curator at the Open Museum, who organized a large exhibition of Struck’s work in 2008.

Struck’s artistic legacy originates from his love of the print medium, as well as from his landscape and portrait drawings. In Berlin in 1908, he published a seminal book on the art and techniques involved in the process of etching, and passed on his knowledge to students such as Marc Chagall, Jacob Steinhardt and, when he moved to Palestine, Anna Ticho and Nahum Gutman.

Featured in the museum’s opening exhibition are portraits of Theodore Herzl and Henrik Ibsen. During Struck’s career, Albert Einstein, Sigmund Freud, Friedrich Nietzsche and Oscar Wilde also commissioned him to paint them. Struck’s artistic legacy, however, is only part of his story, and it alone might not have warranted such a museum.

Born Chaim Aaron ben David in 1876, Struck grew up in Berlin as an Orthodox Jew, and was very much a product of the Enlightenment. He studied at the Berlin Academy of Fine Arts. As was typical of many Jews of the time, he assimilated into German society, but never at the cost of his faith, remaining a practicing Jew throughout his life.

Struck became a well-known artist early in his career and his house was populated by many intellectuals, artists and writers of the time. The cultural milieu of the era must have presented Struck with its own set of challenges, yet possibly by dint of his faith, he always maintained a balance in his art and personal life, even making a point of signing many works with a Star of David and using his Hebrew name.

In 1914, Struck enlisted in the German army, where he was called upon to act as a liaison in varying capacities and was awarded the Iron Cross. He was also one of the founders of the Mizrachi movement, took part in meetings of the World Zionist Congress, and helped found both the Bezalel Academy of Arts and Design in Jerusalem and the Tel Aviv Museum of Art.

Struck left Berlin for Palestine just before the beginning of the Weimar period. When he set up house in Haifa he became a keen gardener, probably influenced by Goethe, whose house he had visited and sketched, and who had written texts on botany. Struck imported a variety of exotic flora and fauna and collaborated on the construction of the Technion Gardens with the architect of his house, Alexander Baerwald.

As an artist, Struck was strongly influenced by the classical and romantic traditions and by the realism of the French Barbizon school. Many of his landscape drawings are of stark, remote scenes, marked by simple, rugged linework and minimal forms. After portraying gritty scenes and characters during the war years, Struck’s line lightened in the face of the more open vistas of the Palestinian desert climate.

Most Israeli artists of the time were rendering the landscape in colorful hues. Struck’s etchings of town and countryside portray the landscape as a more barren place, sparsely dotted with vegetation and, at times, with foreboding skies.

Struck died in 1944. Writing about the artist, the art historian Karl Schwarz reflected: “The art of etching was his special field of activity and expertise. It was in connection with this medium that he made his name, and his etchvvings mirror his whole career — a rich and varied life which was accompanied by success and recognition from the very outset.” The legacy of that rich and varied life is now well-represented by the new, modest museum in Haifa that bears the artist’s name.

Graham Lawson writes frequently about the arts for the Forward.