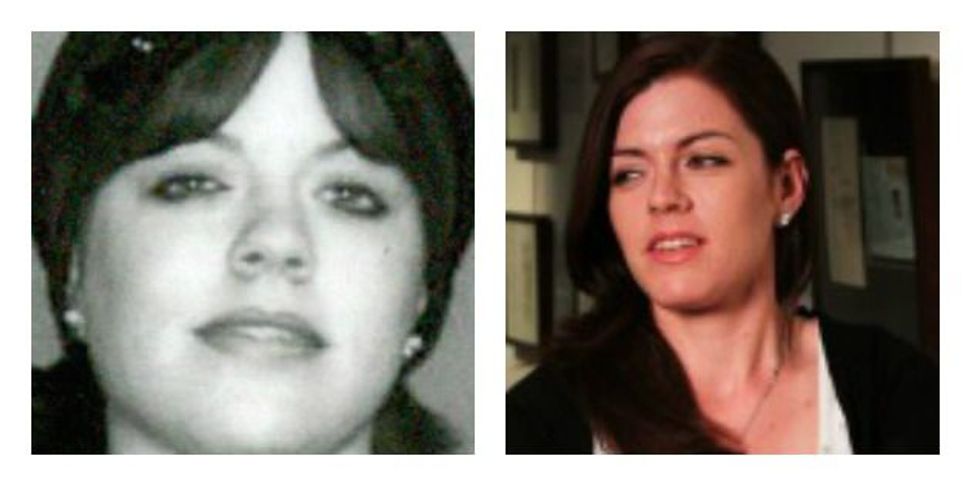 Then and Now: Frimet Goldberger used to wear and wig and a hat over her shaved head (left). Today she grows her hair long. Image by courtesy of frimet goldberger, nate lavey

I remember the first time I felt the cold, prickly air on my newly shaved head. I remember looking in the mirror. I remember staring at the pile of auburn hair in the vanity sink of the cozy basement apartment I now shared with my husband of less than a day. I remember my mother gathering the hair into a garbage bag and disposing of it, unaffectedly. I remember placing the new wig on my bare head and fussing over the few stray hairs the shaytl makher, or wig stylist, forgot to spray into place.

The morning after my wedding, three months after my 18th birthday, my mother shaved my head, and I felt absolutely nothing. Was I supposed to feel sad at this loss? Was I supposed to feel violated? I did not. Married women shave their heads because Hashem and the rebbe command them to do so. According to the Talmud, a woman’s uncovered hair is equivalent to physical nudity. Hasidic rabbis have taken this a step further, requiring women to shave their heads to ensure that not a single hair is seen. For Satmar women like me, it is a grave sin not to shave. You would not be buried in the Satmar beys-hakhayim, and if that weren’t serious enough, you would also put your children, live and unborn, at imminent risk of terrible diseases.

The Satmar Rebbe, Yoel Teitelbaum, famously gave emotional, tear-jerking speeches against married women growing their own hair. “Jewish daughters, our mothers and fathers gave up their lives to our Father in Heaven for the sanctity of His name, but you, their daughters, don’t want to give up even a few hairs?” he asked in a speech on Yom Kippur eve in 1951, according to “The Rebbe,” a 2010 biography by Dovid Meisels. “What does Hashem Yisbarach (God) ask of us? A few hairs! Because of a few hairs you are making yourselves lose both worlds. Jewish daughters, shave your hair and give honor to the Torah.”

The last time I buzzed off my hair — exactly five years ago — was nothing like that first time. The anniversary marks a pivotal juncture in my life, a point of momentous change that led me on a path to a new life. The day before that final shave, on an unusually warm October night, my husband and I sat at an oblong wooden table in a side room of the main Satmar synagogue, in the upstate New York village of Kiryas Joel. At the table were eight middle-aged men in black hats and suits; they sported long gray-and-white beards. I sat with my trembling hands folded on my lap and adjusted my long black skirt — part of the uber-modest ensemble I had carefully chosen hours before — for the umpteenth time, and awaited the storm.

I knew we were in trouble the moment I saw the letter on the official United Talmudical Academy stationary in the mail. The letter was curt and stated unequivocally that because of my failure to dress in accordance with the stringent tznius, modesty, rules of the holy shtetl, our 3-year-old son could no longer attend school. After the shock wore off, my husband and I scrambled to arrange a meeting with the Va’ad Hatznius — the mysterious group charged with maintaining the highest standards of modesty, especially for women. The group was known to resort to extreme measures, such as slashing car tires, when warnings and threats did not work to restore modesty.

As I sat at the table with the Va’ad Hatznius, the head of the group told my husband and me that it could no longer tolerate my modern clothing. This is a holy shtetl, and the rebbe would be horrified if he were still alive, he said in Yiddish, while swaying side to side in his folding chair. Another man chimed in to say he also heard that I have bei-hur, a derisive term used to describe hair on a married woman. They couldn’t confirm it, he said, but oy vey to my family and me. What a disgrace.

I looked down at my dark shoes and thick beige stockings. How did the Va’ad Hatznius find out? It must have been the neighbors who saw a stray hair, who noticed that I wore the same turban all the time. It was the only turban I could find that would fit on top of the large, white knit kippah I bought in the hosiery shop, the type that Hasidic men wear to sleep at night, which held my mass of hair securely in place. I would spend many hours a day with these neighbor women while my children were playing outside. They must have ratted me out. Or, perhaps, the mikveh attendant reported me because I had been absent for more than a year. Since my hair had started to grow out, I had stopped making the monthly trip to the strict Kiryas Joel mikveh to do the ritual bathing after menstruation, as required by Jewish law. Instead, I went to a mikveh in Rockland County, N.Y., where women with hair are allowed to bathe. I knew that the Va’ad Hatznius was going to catch on to my secret at some point, and now it had.

The group would send a woman to my house to check my head, the older man across from me said — all while keeping his right hand over his eyes to shield me from view. He spoke to my husband, never directly to me.

We left the synagogue, pale and worn down. My husband had tried desperately to counter their allegations, to keep our last strings to our community intact, to get our son back into the only yeshiva he could attend. There was no debating that we would have to prove our commitment to the group. We reasoned that if we rewound the clock, if I returned to the person I was — a model of Hasidic modesty — perhaps the group would let us stay in the place we were born and bred. I needed to lengthen my skirt, buy bigger shirts, cover my wig with a wider headband and, of course, shave my head.

I arrived back home, removed the dusty shaver from the linen closet and stared at my reflection in the mirror. It felt wrong, oh so very wrong, to shave. I felt violated and intimidated. But the thought of being revealed was worse. A woman would ring my doorbell tomorrow, ask me to remove my turban, and see all of my hair. Oh, the humiliation, the shame. My mother, my friends and the community would discover my secret. My son would lose his spot in school. I had no choice.

The decision to stop shaving was not a conscious one. When I became pregnant with my second child, I stopped visiting the mikveh. Once I was out of view of the mikveh attendant, there was no one to scrutinize my head. I simply let my hair grow out, anticipating the inevitable shave after my daughter’s birth. At this point in our marriage, my husband and I had forged friendships outside the little enclave of Kiryas Joel and discovered the vast population of pious Orthodox, and even Hasidic, Jews who didn’t shave their heads. The movies we covertly watched at home with the shades drawn, the illicit vacations we took — they all influenced my decision to forgo shaving. I still felt immense guilt at the thought of condemning my family to hell, and the feeling followed me like a haunting shadow.

But then my beautiful daughter arrived one cold January evening. I continued to let my hair grow. I felt like a woman again, even if my hair went uncovered for only a few hours a day, in the safe confines of my own home. It felt too good to let it go.

Standing in front of the mirror after my meeting with the Va’ad Hatznius, I knew I had skirted the inevitable for too long. Within three minutes, my long auburn hair lay in a sad heap in the same sink as it had five years earlier. I cried onto my clipped hair, hot tears of frustration, anger and humiliation.

That night, my husband and I could barely sleep. The next morning, we decided to leave the community for good. We no longer felt capable of maintaining an extreme Hasidic lifestyle. We ached for a little freedom, for the leash around our necks to be loosened, for my hair to be left in its rightful place, to grow or show as I pleased.

It has been five years. Many lifestyle changes and adjustments later, I no longer cover my hair as many of my Orthodox peers do, and I am no longer capable of accepting, let alone understanding, the practice of forced head shaving, much less the threats and intimidation used to maintain it within the community. But I am grateful for the fact that this very last, most personal violation of mine led my husband and me to gather the strength to take control of our lives and to make decisions for ourselves, our children and for me — my own body.

Frimet Goldberger is a radio producer, documentarian, writer and full-time mother of two children. She is set to receive her Bachelor of Arts from Sarah Lawrence College in December.