How Nora Ephron begat Lena Dunham (but we forgive her) 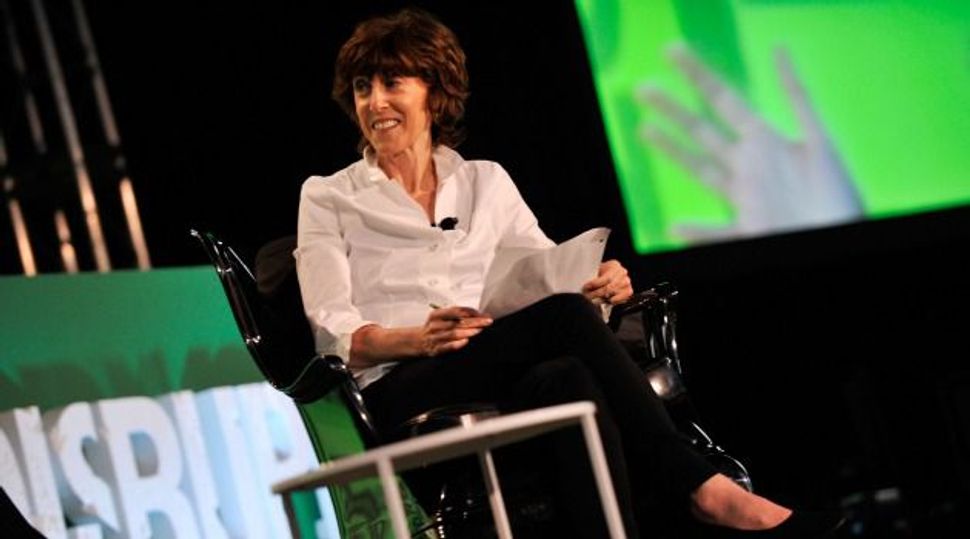 Triple Threat: Essayist, author and director Nora Ephron, seen here in 2011, will probably be best remembered for films like ?Sleepless in Seattle? and ?When Harry Met Sally.? Image by Getty Images

For female writers of a certain age (that is, older than 27), the Lena Dunham phenomenon has brought all sorts of raging jealousies to the surface. Awards! Critical acclaim! A 3.7 million-dollar book advance! I was fine with it all, until Dunham’s reminiscence of Nora Ephron appeared on The New Yorker’s Culture Desk blog, revealing the most jealousy-inducing fact of them all: She’d been friends with Nora Ephron! Actual, real friends. Ephron had met her for lunch at Barneys, referred her to ear, nose and throat doctors, and given her advice about “good white paint and how to handle old tile.” Unfair, I instantly thought. I’m doing okay in my career, and I certainly don’t have any desire to be in my 20s again, or to walk red carpets while dressed in rompers — but oh, what I would have given to have lunch with Nora Ephron! To soak up everything she knew about food, husbands, second-wave feminism, the art of collaborating, which puffy coat to wear on the set and why there aren’t any good dinner parties in California.

The next best thing, I suppose, is the new book “The Most of Nora Ephron,” nearly 600 pages of Ephron’s girl-friendly and relentlessly upbeat voice chattering in your ear about the subjects that consistently preoccupied her over her 50-year career as a journalist, novelist, screenwriter, playwright and blogger: food, friendship, feminism, journalism, sex, love and politics.

Ten of the 31 items on Ephron’s 2010 list, “What I Will Miss” — written well after she had already been diagnosed with the rare form of leukemia that would take her life in the summer of 2102 — are food or food-related. Rachel Samstat, narrator of her 1983 roman a clef, “Heartburn,” is a cookbook author and the host of a cooking show on public television. And of course Sally Albright, the heroine of “When Harry Met Sally…,” had that peculiarly fussy way of ordering a piece of pie. Those two longer works are included here at full length, along with “Lucky Guy,” Ephron’s posthumously produced play about the life of New York tabloid reporter Mike McAlary. But the vast majority of this doorstop-sized collection consists of more than 70 essays, columns, magazine profiles and blogs that are almost universally fun to read. For me, “Lucky Guy” wound up being the toughest slog, followed closely by a 1973 essay about the Pillsbury bakeoff.

But then, food is not one of my big obsessions in life.

Nora Ephron, however, is, and I can’t quite explain why — except that maybe she’s the totally secular, Upper East Side, nonpracticing Jewish mother I always dreamed of having when I was growing up in the rustbelt of northwest Indiana.

“After college, living in Greenwich Village, I sat on my brand-new wide-wale corduroy couch and read ‘The Golden Notebook’ by Doris Lessing,” Ephron recalls in “On Rapture,” a 2002 essay about her love of reading. “Does anyone read ‘The Golden Notebook’ nowadays?” she asks. “I don’t know, but at the time, just before the second stage of the women’s movement burst into being, I was electrified by Lessing’s heroine, Anna, and her struggle to become a free woman.”

Ephron herself never seemed to struggle, which is part of what makes her personality on the page so appealing. (Now that I think about it, it may also be a prerequisite for success in Hollywood.) Oh, sure she struggles with little things, like the size of her breasts, the condition of her neck and how to get people to stop eating egg white omelets, but as for the bigger things — divorce, an alcoholic mother — take it in stride, she’s consistently telling us. Ephron’s own mother famously told her on her deathbed, “Take notes.”

As a culture, we romanticize difficult people. And we especially romanticize difficult writers. But by all accounts, her own included, Ephron was cheerful and good at life. “I care that there’s a war in Indochina, and I demonstrate against it,” she writes in the collection’s opening essay — the introduction to her 1970 book “Wallflower at the Orgy. “And I care that there’s a women’s liberation movement, and I demonstrate for it. But I also go to movies incessantly, and have my hair done once a week, and cook dinner every night, and spend hours in front of the mirror trying to make my eyes look symmetrical, and I care about those things too. Much of my life goes irrelevantly on, in spite of larger events. I suppose that has something to do with my hopelessly midcult nature, and something to do with my Hollywood childhood. But all that, as the man said, is a story for another time.”

We don’t get the full story here, and now that Ephron has passed away, this collection is as close as we’re ever going to get to an autobiography. The facts are all here: the glamorous Beverly Hills childhood where Dorothy Parker or Lillian Ross might stop by her parents’ house for drinks, the girl-reporter-in-the-city years, the disastrous dissolution of her marriage to Carl Bernstein. It’s just all jumbled up and out of chronological order. For me, the only real highlight of this arrangement came when Ephron’s 1972 think piece on attending her 10-year Wellesley College reunion flowed into her 1996 Wellesley commencement address, followed by her tart and amusing 1970 profile of Helen Gurley Brown, creating a neat little feminist trifecta.

Of course, Ephron was also a director — and in the end she will probably be best remembered for commercially successful romantic comedies like “Sleepless in Seattle” and “You’ve Got Mail” — but as Robert Gottlieb points out in his brief introduction to the book, the Oprah-bumped, million-plus success of her 2006 essay collection, “I Feel Bad About My Neck,” ushered in a new stage of her career. “Her honesty and directness, and her unerring prescience, had made her a figure — someone whose influence and authority transcended her individual achievements, extraordinary as they were.” Seems to me the word Gottlieb’s actually searching for here is essentially what Lena Dunham is — that is, a personality. But in the post-Kardashian era, that word seems to function mostly as a synonym for “talentless,” and that’s obviously not the case here.

For the record, I’m not sure if people still read “The Golden Notebook.” I had to read it for a class at Columbia in the early 1990s, and I’m ashamed to say I remember virtually nothing about it. But I first read “Heartburn” in the summer of 1986 — the summer the movie came out — and upon rereading it now, more than 25 years later, I’m ashamed to say I remembered virtually everything about it. The key lime pie triumphantly thrown in the face of the cheating ex. The trips back and forth on the Eastern Shuttle. It’s not a great first novel. It’s just a voice, chattering away about a subject that happened to be preoccupying me that summer: not infidelity or what it would be like to be married to Carl Bernstein. No, the subject that was preoccupying me that summer was what it would be like to be a sophisticated, adult female who lived in New York City. True, most of the book takes place in Washington D.C., but given that I was heading off to Columbia that fall, the New York parts made an indelible dent in my psyche. Thanks to Nora Ephron, I thought New York was going to be all doorman buildings and group therapy. I was wrong. But my 18-year-old self is still grateful to her for showing me what it was like out there on the other side.

To this day, I routinely meet people who cling vehemently to their original 1989 assessment of “When Harry Met Sally…“ as wannabe, watered-down Woody Allen. Chew on this, people: In the nearly 25 years since then, Hollywood has failed to make a better, smarter romantic comedy. Certainly, no one’s even tried to make one based on the central idea that there might be equality and friendship between the sexes. The once great screwball genre has just shriveled up and died. “Nobody knows what happens to sex after liberation,” Ephron wrote in a 1972 essay called “Fantasies,” which ranks as one of the best in the book.

Gina Fattore, formerly a writer-producer on “Californication,” “Gilmore Girls” and “Dawson’s Creek,” is now a co-executive producer on “Parenthood.”

How Nora Ephron begat Lena Dunham (but we forgive her)