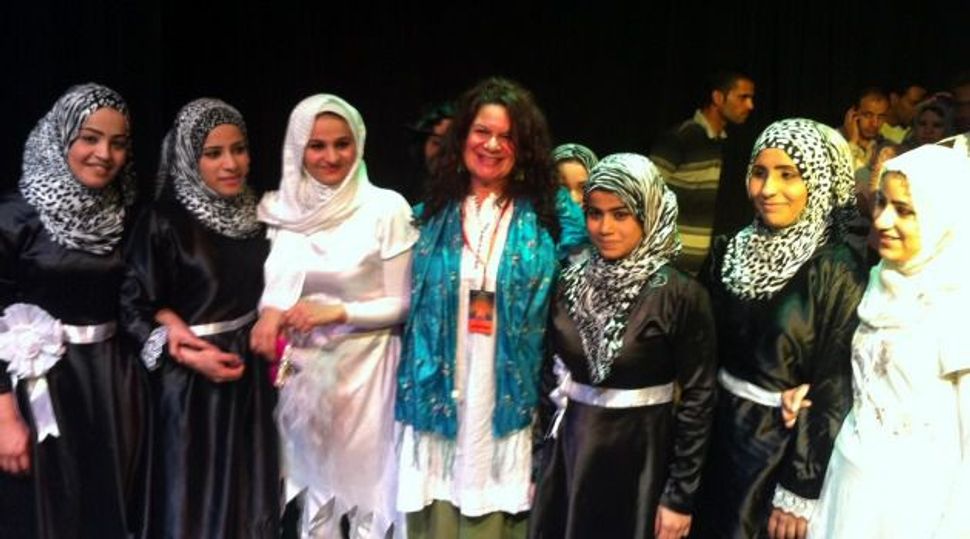 An American in Iraq: Jessica Litwak is a playwright, director, and drama therapist who has worked over the world. Her experiences in Muslim countries have been more than a tad eye-opening. Image by Courtesy of Jessica Litwak

Venturing into global conflict zones, some of which are Muslim, can be challenging to Jewish theater artists. Consider this: Two artists were willing to speak with the Forward about their experiences, while eight others who had traveled — or were about to travel —into Muslim hotspots did not want to participate in this story or to be identified.

The subject clearly hits a nerve and triggers painful questions: If you are a contemporary Jew, what is your place in the world today? What role, if any, does the Holocaust and Israel play in your identity? How do you reconcile reservations about Israel’s relationship to the Palestinians and your connection to your own grandparents who fled the pogroms?

[Jessica Litwak][1] and Jenny Romaine are two theater artists who have been committed to political/activist theater for decades. Litwak, a playwright, director, and drama therapist, and Romaine, whose interests are pageantry, processionals, puppetry and street theater, have performed all over the world. Their understanding of themselves as Americans, feminists, and, most pointedly, Jews in the Muslim world has been more than a tad eye-opening.

Litwak, who is thoughtful and chooses her words carefully, says she did not anticipate the level of anti-Semitism she encountered in Iraq, though she was prepared for anti-American sentiment. Indeed, she arrived in 2012 feeling guilty about America’s war in Iraq, and when a fellow theater artist made disparaging remarks about President Obama, she burst into tears and apologized

“I was so tired of being hated, and I cried, ‘I’m so sorry for what my country did to yours,’” Litwak recalled. “In broken English, an Iraqi woman comforted me and said: ‘But Jessica, we love you. You’re not a bum.’”

To this day, Litwak wonders if her own guilt might have made her a more vulnerable, obvious target for abuse. She was assigned a 24/7 bodyguard because she was a Jew, and her translator told her not to let anyone know she was Jewish. Later, when she was in Beirut, an armed security guard confiscated her camera when she took a photograph of a synagogue.

“You see the holes in the buildings because of Israeli bombing, and you can understand why there’s anti-Semitism in Beirut, though it’s certainly less marked than elsewhere,” Litwak said. “I felt freer there than anywhere else in the Mideast.”

Litwak came of age in the 1960s and ’70s, in San Francisco. Her mother worked on behalf of striking farm workers, and racial equality was a major topic of conversation at home.

Her immigrant, Russian-born, Yiddish-speaking grandparents were socialists-cum-communists; her paternal grandfather became the president of the Detroit Teamsters Local union. The family always celebrated the Passover Seder but made no reference to “God.” Litwak knew she was a Jew, but she didn’t feel that her ethnicity defined her until years later, when she encountered the writings of Emma Goldman, her “spiritual mother.” Litwak wound up naming one of her daughters Emma.

The first time Litwak attended synagogue was after her husband left her with two small daughters. She was in New York City, walking down Broadway weeping. She found herself staring into the window of a store selling Judaica, when an old man approached and asked why she was crying. “I said, ‘I’m all alone.’ He said, ‘You Jewish?’ I said, ‘Yes,’ and he said, ‘You’re not all alone,’ and he sent me to a local synagogue. I went to services that night.” She now practices a form of Judaism at Romemu, an Upper West Side congregation that is “left-wing, inclusive and yet a deeply spiritual practice that blends Buddhist meditation and the common sense of human rights.”

Traveling abroad, Litwak’s most complex feelings surfaced when she arrived at the Jenin refugee camp in the West Bank to work with the highly controversial The Freedom Theatre. The theater’s mission is to create theater that advocates for Palestinian autonomy and for freedom from Israel’s military occupation. “They don’t even call it Israel,” Litwak said. “They call it ‘48.’”

Litwak is sympathetic to the goals of The Freedom Theatre, arguing that while she was in Jenin, she personally experienced the oppression of the Israeli government, especially at the checkpoints, “where everyone was treated like a criminal, including me, because I was traveling with Palestinians.”

Bloodshed is not foreign to The Freedom Theatre. The theater’s former co-director and founder, Juliano Mer-Khamis, a Palestinian Jew, was assassinated in April 2011, and the murder remains unsolved.

Litwak worked with The Freedom Theatre for one month, but never felt free to tell her colleagues she was Jewish, and when she said she was headed to Tel Aviv, her friends at the theater made it clear that if she went to Israel she would not be welcomed back.

“They feel that the only way to deal with Israel is through BDS [boycott, divestment and sanctions],” Litwak said. “They do not understand the distinction between being a Jew and a Zionist, or even an Israeli who is not against them.”

As a feminist, Litwak found herself in yet another bind when she crossed the border into Israel, where she could remove the layers of clothing she had been forced to wear in Jenin.

“It’s the politics of heat, where women wear long, long coats in a hundred degree temperatures, while men walk around in shorts and sleeveless shirts,” she said. “I don’t think it’s fair. But I don’t think we should stop advocating for a culture’s freedom simply because we may not like its values.”

Her trip was transformative on several levels, not least her awareness of herself as a Jew. When she returned home, she attended synagogue services. “I don’t go every Friday night, but I had to go that night,” she said. “I can’t tolerate anti-Palestinian or anti-Arab talk, but I am connected to my identity as a Jew. I don’t think I’m ambivalent. I have a passionate curiosity about looking at a dialectic that holds two truths to be self-evident. I’m proud to be able to have the discomfort of not knowing.”

The gregarious and expansive Romaine favors the word “implicated” as opposed to “guilty” to describe her feelings in hotspots where America has played an insensitive — and sometimes cruel — colonial role in her view.

As a young woman — and before she was a theater artist — Romaine felt troubled visiting Egypt, a country that America was aiding financially, “yet the Egyptian government was so controlling and corrupt, and the people couldn’t get medicine.”

Years later, when she ventured into Nicaragua with the political activist theater group Bread and Puppet, she felt menaced by the American-supported Contra activity and violence that surrounded the troupe. The theater piece — a touring pageant — was a celebration of the life of Archbishop Oscar Romero, of El Salvador.

Romaine was brought up on Long Island, and her family had a long tradition of leftist sympathies and was composed of committed Yiddishists “We were always addressing our place in the world as Jews,” she said. “Being Jewish meant political engagement. Toy-rah — yes, that’s how I pronounce it — Toy-rah was about justice.”

In 2007 she was drawn to Bond Street Theatre, which, she said, was seeking “puppeteers to go to dangerous places and roll around in the mud and share skills.” Romaine said the theater group had its sights set on India, where it would collaborate with the Exile Theatre of Afghanistan, a group of Afghan artists who fled to Pakistan. Bond Street Theatre’s goal was to exchange ideas and artistic techniques. The company created a production, “A Kite’s Tale,” that advocated for children’s rights.

Romaine was stunned by the enormity of India and its overwhelming poverty, but also by its richness and beauty. “You’d look out the window in the middle of the night and see ox carts pulled by giant animals, and in the background the Krishna Temple was blasting its music,” she recalled. “It was absurdist ecstasy, but underneath it there was so much pain.”

The women were horrifically repressed — overworked, forced into prostitution and, in some instances, starved. The members of the all male-theater troupe with whom she collaborated were mostly devout Muslims — praying at various times throughout the day — and had no idea how to relate to her. “They said, ‘We’ve never met a woman like you,’” recalled Romaine, who defines herself as “queer, non-normative, meaning my gender and sexuality are open. But I never felt any homophobia. I just assumed they were responding to me as a free, uninhibited woman who had agency and the ability to make choices. But I told them to react to me as a man if it made them more comfortable.”

After Romaine told her colleagues she was Jewish, she held a modified Seder with them in Bihar, a very poor village where traveling at night was ill-advised. The Seder participants included participants from West Bengal, Patna, Calcutta, Delhi and Afghanistan.Everyone spoke English, was familiar with the Moses story and followed Romaine with interest as she read from the Haggadah.

They all participated in the singing. “However, my friends from Afghanistan had problems pronouncing the Hebrew words,” Romaine noted. “They said it sounded like frogs. But the Persian songs [built a] bridge.” The experience confirmed her view that there are many facets of Islamism and that a broader notion of what it means to be Jewish can serve as a door opener. “Israel dominates everyone’s understanding of what Jews are about,” Romaine said. “Israel should live, but it doesn’t define who I want to be in the world. I don’t want to be part of a discussion that prevents me from relating to other cultures.”

Both Litwak and Romaine have recently written plays about environmental issues, viewing a much larger universe through an American-feminist Jewish lens. And once again, the question arises: What role should the Jew take in addressing the crises?