‘South Park’ and the Jewish Red Heifer Tale of Armageddon 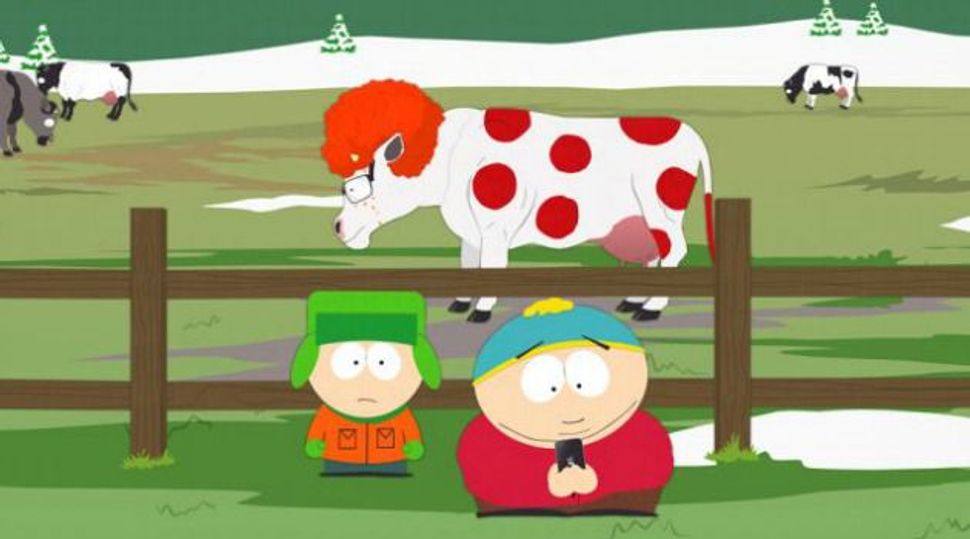 He announces he has found a ginger cow (spoiler alert!), though in fact he merely dyed its coat.

The news spreads like wildfire. Rabbis fly in from Israel to South Park to claim the cow, which they need to rebuild the Temple and induce the coming of the Messiah. But when they get there, they find that Christians and Muslims, to whom the red heifer is also holy, had arrived first. The three religions prepare to war over the cow, which they see as portending Armageddon.

Just as the world is about to come to an end in a conflagration of holy war, the sides agree to sacrifice the red heifer in Jerusalem together. Members of the three religions unite in the Holy City at an open-air concert by Van Halen in preparation for the cow’s sacrifice. We are told that world peace has arrived.

This all comes to an end and war resumes when the crowd is told that the red heifer appeared miraculously and wasn’t dyed “by a child with a small penis” as the prophecy had foretold.

So it is in South Park. But in actuality, the red heifer really is an element in the three religions; it is central to Jewish belief and, according to some traditions, is key to the coming of the end of days. However, the ritual of the red-colored bovine is probably rooted in misinterpretation.

First, sacrifice and burn the cow

We first hear of the red heifer in the Book of Numbers. “This is the ordinance of the law which the LORD hath commanded, saying, Speak unto the children of Israel, that they bring thee a red heifer without spot, wherein is no blemish, and upon which never came yoke.” (19:2)

This unblemished bovine, the text continues, needs to be ritually slaughtered, burnt to ashes together with cedar wood, hyssop and scarlet wool. The ashes are then collected, mixed with pure water and voilà! You’ve got mei nida – purifying water.

The ancient Hebrews were profoundly preoccupied with spiritual purity, and the worst kind of uncleanliness was that incurred by handling the dead. A seven-day ritual was needed to purify oneself, which included twice being sprinkled with the purifying water.

During the times of the Second Temple, the specifics of the ceremonies involved in the making of the purifying water were highly contested by the Pharisees and Zadokites. That is why the Mishnah, a central book of Jewish law dating from the period, goes into great detail regarding the red heifer, elaborating on preparation of the purifying water and use thereof. In fact it devotes a whole tractate to the subject – parah (“Cow”).

The Mishnah tells us that since those involved in the preparation of the purifying water had to be spiritually pure, drastic measures had to be taken, including rearing children in a special compound where they would be kept away from all impurity and thus participate in the important ceremony.

Now, this ritual is predicated on red cows actually existing. The problem is that they don’t. At best cows are auburn. Yet, according to the ancient texts, there were red heifers for the burning.

How does one reconcile this? Well, rabbinic teaching tells us that God miraculously brought about red heifers for use for this purpose, but there could be another explanation.

The ancients separated the domain of colors differently from us moderns. What we today see as to distinct colors our forefathers saw as merely different shades of the same. What we call brown, the ancient Hebrews just saw as a type of red. They would be baffled by our pedantic insistence that pink, purple, red, orange and brown each be given a different name – to them all were just different shades of red.

Even with this allowance for rufous fur, the list of restrictions – most constraining of all, that the beast not have any hair of a different color – made these red cows extremely rare. The Mishnah tells us that only nine red heifers were turned into purifying water: one by Moses, one by Ezra, two each by Simon the Just and Yochanan the High Priest, and then by Elioenai ben HaQayaph and Hanameel the Egyptian.

According to some Jews, the Messiah cannot come and hail the End of Days without the Third Temple arising in Jerusalem and since the Temple cannot be built without proper purification, a red heifer must be found. The Temple Institute, an organization dedicated to preparing the groundwork for the construction of the Temple (where the Dome of the Rock is inconveniently standing) has been looking for years. Every few years a red heifer is announced, but is then rejected due to a non-red hair being found.

Some fundamentalist Christians believe that the Second Coming of Christ requires that the Temple be rebuilt and thus also anticipate the birth of a red heifer as a sign of the coming of the end of days.

Muslims also tell of a heifer tradition. The chapter in the Qur’an titled al-Baqarah (“The Cow”) describes the burning of a cow by the Israelites, though it isn’t red but yellow.

Anyway, were a cow to be born bright red down to its very last follicle, neither world peace nor Armageddon are likely to ensue overnight. Presumably some zealous Jews and Christians would get very overwrought. The Temple Institute would slaughter the poor creature and burn its carcass in an elaborate ceremony. Then its ashes would be mixed with water and bottled, and set to sit somewhere to wait for the rest of the conditions for the construction of the Temple to be met.

‘South Park’ and the Jewish Red Heifer Tale of Armageddon