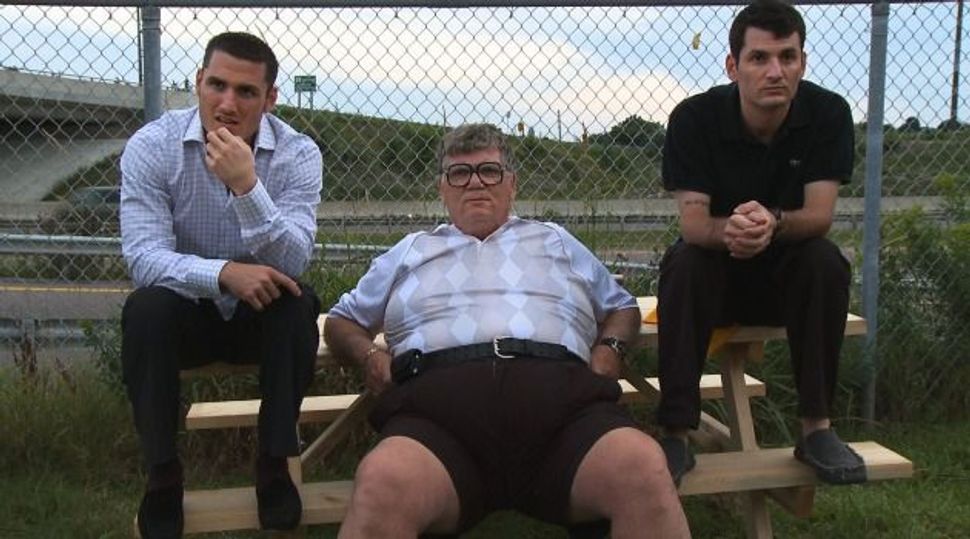 It’s one of the most instantly recognizable Jewish narratives of the 20th century: Two high schoolers – one an impoverished immigrant with an Old World accent that 50 years in the New World will be unable to fade, and the other the child of holocaust survivors — meet in the 1970s and fall in love. They marry, they struggle, and eventually they move forward, determined to give their children something bigger and better than what they knew.

The Mother cooks and takes care of the house, the Father starts a successful business. One of their two sons seems destined to take it over, while the other seems destined to rebel. And sure enough, it is the rebellious, questioning son who confronts the dark histories that both bind his family together and threaten to tear them apart.

Except in this case, the Father’s business is a strip club. And the Son’s bar mitzvah present was a lapdance.

Toronto-based filmmaker Shawney Cohen, now 38, has made a sensitive, thoughtful documentary about his very unusual childhood growing as a child of the Manor, the ‘gentleman’s club’ his father bought when Cohen was just 6 years old. Although the film abounds with colorful characters – an ex-con bar manager, a retired stripper with faded blond hair and an addiction to pills, and the expected coterie of struggling dancers who can’t seem to keep the peace or make it in for their shifts – the two most compelling characters by far are Cohen’s parents, Brenda and Roger.

Their house is haunted by something far more scandalous than some naked flesh or battered overnight guests, the scandal of 20th century anti-Semitism. Roger, an obese Israeli/Egyptian immigrant with thick glasses and the charisma of a late-career Oliver Reed, eats almost nonstop as a protest against the hunger he remembers from childhood. Brenda, large-eyed and frail, cooks lavish meals for the family, but weighs only 85 pounds. Both parents have a life of abundance that they don’t know how to enjoy – and two sons who know something is wrong but are not sure what to do about it.

“The Manor” will open DOCNYC this Friday night. Shawney Cohen spoke with The Forward by phone a few days ago in Toronto, while preparing for his night shift at managing the bar at the strip club. He spoke candidly about his mother’s illness, his father’s weight, and the complexities of his parents’ 40 year marriage.

The Forward: Even now, you work at the club?

It’s funny, that’s the most common question I get – are you still working there? People love the fact that I do. I am working on a new film now, and I still do my Sunday and Monday shift and I think it’s great. I’ve never been closer with my family, and yeah absolutely I think the film has really brought us close together.

How did your family respond to seeing themselves exposed on the big screen?

I didn’t show them anything until a month before it opened at HotDocs, and yeah, that was the longest 80 minutes of my life. But the first thing my mother said to my father immediately after the screening – she looked over at my father and said Roger that’s exactly you.

Was it difficult for your mother to see such a private struggle – her anorexia – become public?

Growing up, we all knew she wasn’t eating, but that was just Brenda. And then she spent hours talking about it to the camera – how she felt about the club, about her family, about our lives. it was kind of a therapeutic process for her. My grandmother spent five years in Auschwitz, it’s pretty obvious to me that that had a relationship with my mother’s other neuroses and her eating disorder.

Sure, I mean my grandmother spoke about it all quite openly. Once she was just walking down the street in the ghetto with her sister who was the same age, and a Nazi officer saw them – they were walking a poodle. The officers said “I want this dog for my daughter.” He pulled out a gun and shot my grandmother’s sister in the head, and pulled the dog away. I don’t know in what capacity, but yes I think in some ways the Holocaust is related to her condition.

And the Manor. You even suggest in the film that your mother got sick because of the strip club.

I remember all these ridiculous discussions about it when I was young. It wasn’t easy for my mother, it took some time for her to digest. And she eventually accepted it when the money started pouring in. Suddenly she had a Cadillac and a bigger house and I guess that really helped mask the issue.

Money became an issue in a different way, though. One of the most charged moments in the film is one in which you ask your father to help pay her therapy, and he refuses. What was that about?

That’s a harsh scene, and it’s the turning point where you get to not like my father. I almost didn’t put it in. But this idea that you have to help yourself and be the one willing to make the first move is I think very much a part of his fabric, even with my mother. And I will say this: You don’t run a strip club for 30 years without having that sort of hard-nosed pull yourself up from your bootstraps kind of attitude. It can harden you, dealing with Mafioso characters…So he’s always had his back up, and now I think he can’t really differentiate between the people in his family and the people who might be taking advantage of him in other ways.

Well, also, it can be a pretty rough environment. In the film you casually mention a car exploding in the parking lot, and then just move on to another subject. Were you exposed to much violence growing up?

My father had this rule with the bouncers that worked there that if I ever got hurt or got touched, or if there was a fight and something happened to me, then the nearest bouncer closest to me got fired. So I had this sense of security because of that. Which is sort of annoying because I really wanted to be my own person!

You shot intimate footage of your family for three years. Why did your father let you do it?

I think there may have been a part of him that thought, Shawney is this kind of a failed filmmaker, he’s still a student, who gives a sh**, let’s just let him film us because this isn’t going anywhere anyway, so who really cares? And when you don’t think the footage is going to go anywhere, you’re just kinda gonna be yourself.

You say making the film has brought you all closer together. What have you learned about your family by making it?

You know, they still go on vacation together. In many ways they are very much a couple, and yet at times they hate each more than you can imagine. What’s so interesting to me after being in the process of making the film for five years, what I finally learned is that I don’t understand them whatsoever.