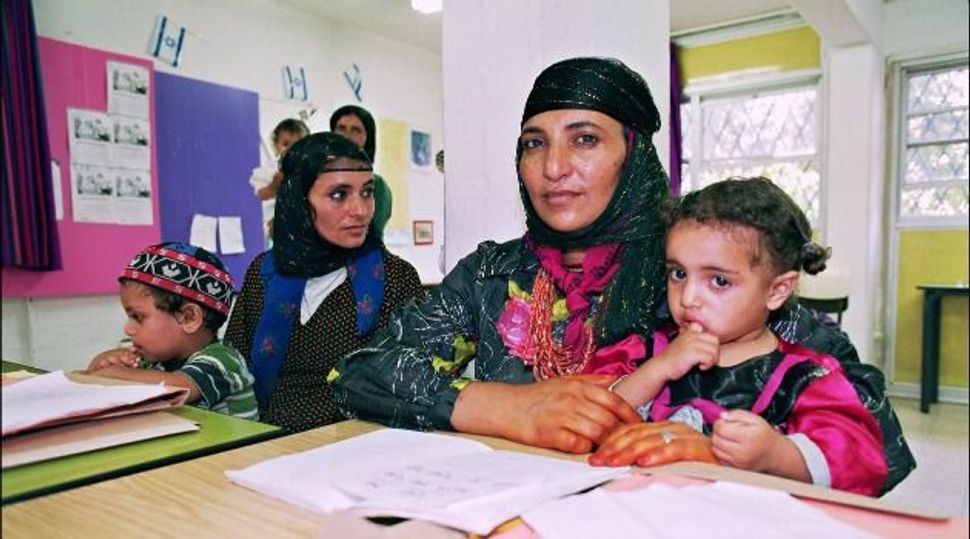 Forced to Flee: Yemeni Jews get instruction at a center for immigrants in Israel. Image by Getty images

A Canadian parliamentary committee called on the government to recognize the plight of Jewish refugees from Arab lands.

A report from the Standing Committee on Foreign Affairs and International Development recommends that Ottawa “officially recognize the experience of Jewish refugees who were displaced from states in the Middle East and North Africa after 1948.” It also recommends that Canada “encourage the direct negotiating parties to take into account all refugee populations as part of any just and comprehensive resolution to the Israeli-Palestinian and Arab-Israeli conflicts.”

Submitted last week to Parliament, the 17-page report noted that during the course of its hearings in May, the committee “learned of the discrimination and hardship faced by Jewish people living in the Middle East and North Africa in the 20th century [which] surged over the years in tandem with the crisis moments of the Arab-Israeli conflict, in particular the 1948-1949 and 1967 wars.

“As a result,” the report states, “almost all of the Jews in Algeria, Egypt, Iraq, Lebanon, Libya, Morocco, Syria, Tunisia, and Yemen eventually left their homes and communities, which had existed in the Middle East and North Africa for centuries.”

The committee heard that since 1948, some 850,000 Jews fled persecution and violence in the Middle East and North Africa, and that about 650,000 immigrated to Israel, while the rest settled in other countries, including Canada.

The report stressed that “recognition of the experiences of Jewish refugees does not diminish or compete with the situation of Palestinian refugees.”

When the committee began deliberations, the Canadian Centre for Israel and Jewish Affairs, which appeared as a witness, noted that Canada’s official Middle East policy “neglects” Jewish refugees from Arab countries, “only accounting for Palestinian refugees.”

The center welcomed the report.

“We are hopeful that the federal government will quickly enact the committee’s recommendations and ensure that Canadian policy reflects a fair, accurate and complete account of the history of Middle Eastern refugees,” said its CEO, Shimon Fogler.