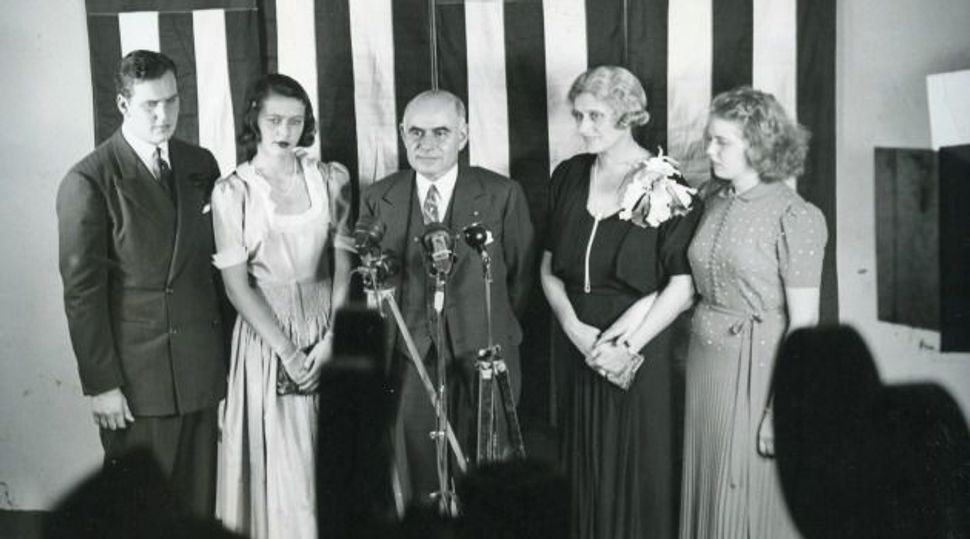 Winner: Herbert Lehman, the first Jewish governor of New York, celebrates his win for a fourth term on November 9, 1938, at the Democratic headquarters at the Chanin Building, in Manhattan. Image by International News/Forward Association

In the wake of the “Not guilty” verdict in the Beilis blood libel trial, Russian anti-Semites are furious and have stepped up their activities. They are spreading lies and rumors in their newspapers — for example, stating that Jews had bribed the jury. It is rumored that the prosecutor in the Beilis case is seeking to appeal the verdict, despite evidence received in the courtroom that prosecution witness Vera Tsheberiak is the actual murderer. In addition, new blood libel accusations have been leveled in a number of places in the empire, most recently in the Volynian town of Bogopol, where two Christian children went missing; word was spread that local Jews were responsible and planned to use their blood for ritual purposes. Fortunately, the rumor subsided after the children were found.

Details have come forth regarding last week’s assassination of a German diplomat in Paris. On November 8, a young man walked into the German Embassy in Paris and said that he had some important documents to give the embassy but could hand-deliver them only to a diplomat. The Germans invited him into the office of Third Secretary Ernst vom Rath. Two minutes later, five shots rang out and vom Rath stumbled out of his office, holding his gut. The young man threw down the revolver and said, “I shot a representative of the German government to avenge the attacks on my brothers in Germany, for my parents who, after living 30 years in Germany, were evicted from their home, put in a wagon and shipped to the Polish border.” The 17-year-old boy who perpetrated the attack is Hershel Feivel Grynszpan. Public opinion in France seems to be very much on his side.

Hundreds of thousands of people on the streets of New York did not want to believe the news: The president had been killed. Thousands gathered in the streets, pale, with tears streaming down their faces. Taxi drivers stopped their cabs in the street, got out and solemnly listened to their radios. Everything was shut down, including restaurants and theaters. The Synagogue Council of America, which represents all three major Jewish denominations, called for the recitation of special prayers in all places of worship to memorialize the slain president.