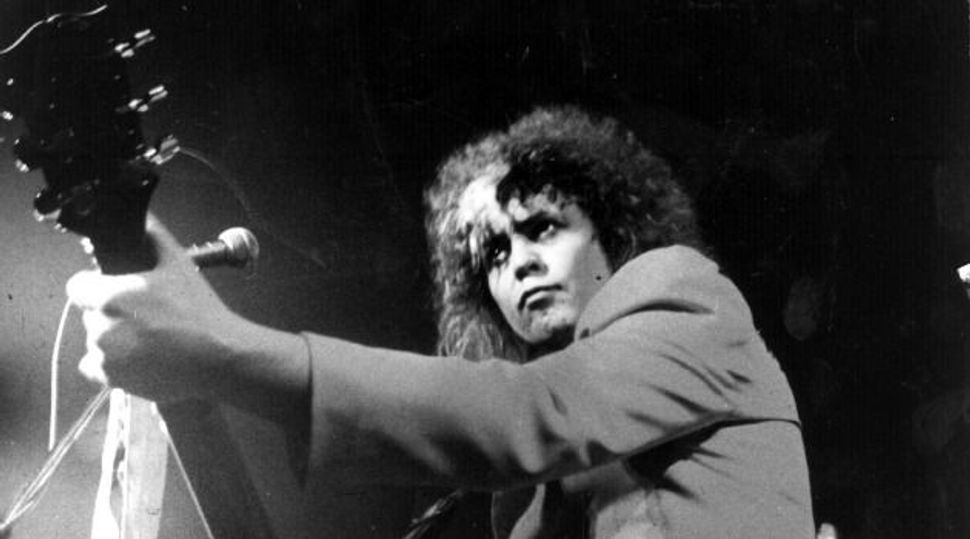 Born Marc Feld, the late T-Rex founder Mark Feld offered a glam-disc number called ?Light of Love,? which is the closest he came to a song for Thanksgivukkah. Image by Getty Images

Talk about your freak occurrences: For the first time since 1888 — and the last time, according to certain quantum physicists, for at least another 7,000 centuries — the Gregorian and Hebrew calendars have synched up so that this year, Thanksgiving and the first day of Hanukkah will fall on the same day. This rare collision of holidays has resulted in something of a pop-cultural furor, inspiring the creation of turkey-shaped menorahs, and sparking debates on topics ranging from the greater spiritual significance of Thanksgivukkah (or Hanksgiving, if you prefer) to how best to combine elements of classic Thanksgiving and Hanukkah menus.

So in the spirit of Thanksgivukkah, here’s a playlist of eight songs (one for each night of Hanukkah) with Jewish connections that will both inform and enliven your celebration.

Since giving thanks for our blessings is a major component of both Thanksgiving and Hanukkah, this funky hard rocker from the Jewish hip-hop trio’s 1992 album, “Check Your Head,” is a shoe-in for inclusion here — especially if you count fuzz bass as a gift from God. “What’s gonna set you free? Look inside and you’ll see,” the boys counsel. And crank up the volume while you’re at it!

The closest thing to a prayer ever waxed by the late Marc Bolan (ne Mark Feld), this glam-disco mantra from 1974 was most likely about his desire to stay in the spotlight despite changing pop tastes. But its simple, heartfelt lyrics could just as easily refer to the flame from the Temple oil that, miraculously, burned for eight days, to the light from the menorah or to the glow from the candles at the Thanksgiving dinner table.

No Thanksgiving playlist is complete without Arlo Guthrie’s 18-minute satirical talking blues about draft boards, small-town cops and trying to take out the garbage on Turkey Day. But since Guthrie is Jewish on his mom’s side (at age 13, he underwent what he’s since described as a “Hootenanny Bar Mitzvah”), he’s got the Hanukkah part covered, as well.

Actor, comedian and visionary Adam Sandler apparently anticipated the coming of Thanksgivukkah by a good two decades, writing “The Thanksgiving Song” in 1992 and following it with “The Chanukah Song” in 1994. While both songs certainly apply here, we’re going with the former because of its mentions of turkey-related drowsiness, Sammy Davis Jr.’s missing eye and Cheryl Tiegs.

Thanksgiving and Hanukkah both mean breaking bread with your relatives, and no song better captures the comical yet frustrating nature of family dinners than this 1958 rhythm and blues monologue from “Mr. Rhythm” himself, who converted to Judaism in 2001. Will somebody please pass him the biscuits already?

Nat Kendrick and the Swans — “(Do the) Mashed Potatoes”

This groovy 1960 dance track should have been credited to James Brown, but the Godfather of Soul was forced to put it out under another musician’s name because of a dispute with Syd Nathan, the Jewish boss of Brown’s record label. Nathan, who was evidently more of a potato latkes guy, didn’t want Brown releasing a song named after the perennial Thanksgiving side dish.

Trying to plan your Thanksgivukkah dessert course? The Mighty Zim has got you covered. “Blueberry, apple, cherry, pumpkin and plum,” he sings on this rollicking tribute to the joys of homemade baked goods from the 1969 album “Nashville Skyline.” “Call me for dinner, honey, I’ll be there.” Dylan caught a lot of flak at the time for penning such seemingly insignificant lyrics, but really — what could be more profound than a man’s love for pie?

Herb Alpert and the Tijuana Brass — “A Taste of Honey”

Despite the “Tijuana” in his band’s name, Herb Alpert was raised Jewish in Los Angeles’s Fairfax district, so he knows a thing or two about Hanukkah desserts. Want to give your pumpkin cookies or pies a little Thanksgivukkah flavor? Just take Alpert’s sage advice and add a little, well, you know.

Dan Epstein writes frequently about the arts for the Forward. He is the author of “Big Hair and Plastic Grass: A Funky Ride Through Baseball and America in the Swinging ’70s” (Thomas Dunne Books, 2010).