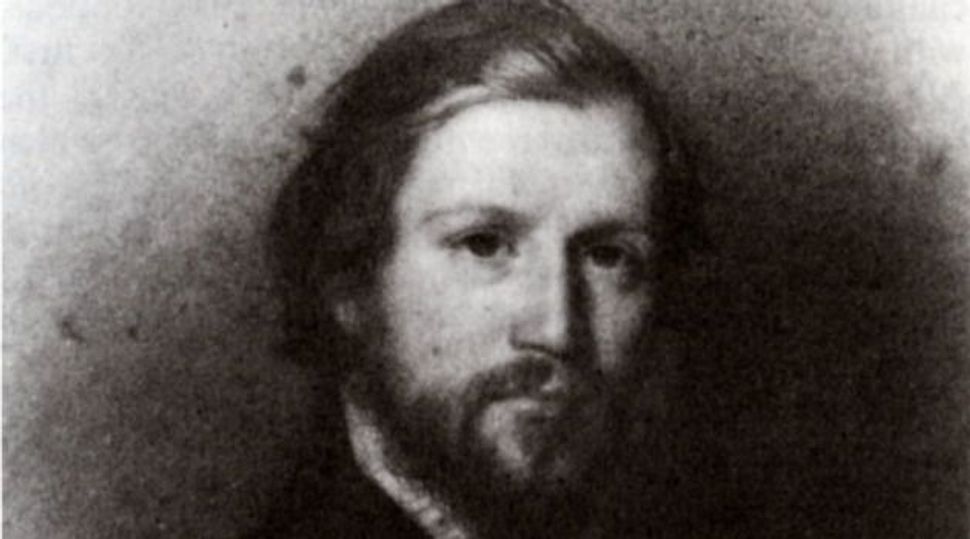 False Legend: After Alkan?s death in 1888, noted teacher Isidor Philipp, an assimilated Jewish pianist, repeatedly spread the rumor that Alkan was crushed by a bookcase when reaching for a volume of the Talmud. Image by Courtesy of the Alkan Society

This month marks the bicentenary of the French Jewish composer and pianist Charles-Valentin Alkan (1813-1888). A new biography was published earlier this year in France, written by two devotees, Brigitte François-Sappey and François Luguenot. And pianists such as Pascal Amoyel and Alessandro Deljavan, have released recordings of his work, which range from the resolutely virtuosic to the ardently simple.

Alkan was musically a fiercely individual thinker, and an observant Jew in a secular country where free-thinkers were prized, especially in the arts world. Some of Alkan’s works are heroic in length, but his “Ancienne mélodie de la synagogue” (“Old Synagogue Melody”) from “Préludes, Op. 31” express his religious feelings with surprising humility. This wide range of expression is to be expected from a transcendent piano virtuoso; in the bitterly competitive Paris musical world, no one disagreed about Alkan’s transcendent pianistic abilities. There was, however, some sarcasm about Alkan’s devotion to Jewish culture and history. After Alkan’s death in 1888, noted teacher Isidor Philipp, an assimilated Jewish pianist, repeatedly spread the rumor that Alkan was crushed by a bookcase when reaching for a volume of the Talmud. This tale, convincingly proven false by music historians, may echo a legend about the death of Aryeh Leib ben Asher Gunzberg, known as the Shaagas Aryeh, a rabbi of Metz in northeast France, where Alkan’s own family hailed from, who also supposedly died when a bookcase fell on him.

Another mocking reference to Alkan’s piety came from Alkan’s pupil Antoine François Marmontel, who was named to a much-desired Paris Conservatory teaching job instead of Alkan himself. Marmontel’s 1882 memoirs, “Famous Pianists, Silhouettes and Medallions,” state that Alkan’s “bent-over walk and puritanical garb” made him resemble a “rabbi or Anglican minister,” either of which he was “qualified” to be. Less subtle comments were published by the composer and teacher Vincent d’Indy, who described Alkan in old age playing a Beethoven sonata magnificently with the “thin, claw-like fingers of a little old man” (“les doigts maigres et crochus du petit vieillard”).

The word “crochu” also describes a hooked nose (“le nez crochu”), historically used by anti-Semites as a way to identify Jews. A 1903 French anti-Semitic publication, “19 Visible Body Defects for Recognizing Jews” ranked as the “first defect” a “nez crochu.” Quite possibly an approving reader of the aforementioned tract, d’Indy was a vehement opponent of Captain Alfred Dreyfus during the Dreyfus Affair, and in 1900 complained about the “far too many Semites who burden music.” D’Indy even composed a 1920 opera, “The Legend of St. Christopher,” which he described as his “new anti-Jewish drama,” and in 1923, praised Wagner for having freed French music from its “Italian-Jewish-eclectic yoke.” Yet even d’Indy praised Alkan’s artistry.

The closest that Alkan’s contemporaries came to finding fault with his playing was during the 1830s, when some critics complained that his pianism sounded inflexible and overly exact, compared to the relaxed charm of Henri Herz or the flamboyant display of Sigismond Thalberg, two other Jewish keyboard superstars. Alkan freely translated from one musical language to another, as performer on the piano, organ and the pedal piano, the last mentioned being an odd species of piano with an additional pedal board to be played with the feet. Alkan was also obsessed with literary translation, notably of the Bible. His extensive Bible translations, produced over the course of 30 years, were never published and are now lost. Alkan may have considered the act of daily translation to be similar to that of keeping a private diary — a soul-nourishing struggle rather than something to eventually be shared with the public.

Alkan was fluent in both Hebrew and Aramaic, and repeatedly expressed the desire to “set the whole Bible to music.” An inventory of Alkan’s possessions after his death included “volumes of works in Hebrew” and “thirty-eight volumes of Jewish works, finely bound.” In his will, Alkan, who was buried in the Jewish section of Paris’s Montmartre Cemetery, made bequests to Jewish charities to establish a prize for composers of biblical cantatas at the Paris Conservatory.

Alkan retains a paradoxical posthumous relationship to fame, as he did during his lifetime. In an 1860s image, one of the few photographic portraits which survives, Alkan turns his back to the camera in a reflex action akin to a Hasid responding to camera-wielding tourists in Mea Shearim. In a 2007 article in the Journal of the Royal Musical Association, musicologist Jacqueline Waeber interpreted this photo as showing that “Alkan turns his back on the world and its mundane glory. This is evidenced in his progressive abandonment of a career as a virtuoso.” Waeber added that in Alkan’s works, “virtuosity has to be taken in its purest literary sense, as an ideal search for virtu, from the Latin virtus, the quality of human excellence as expressed in any kind of exercise — artistic, intellectual and, of course, spiritual. Alkan’s reluctance to embrace the public career of the virtuoso also finds its roots here… Alkan practised virtuosity as a form of asceticism: a paradoxical conception of virtuosity, then, not aimed at performance and public recognition, but rather viewed as a form of solitary spiritual exercise. It may even be wondered whether the technical requirements of his piano writing might not have been motivated by his practice of Judaism.”