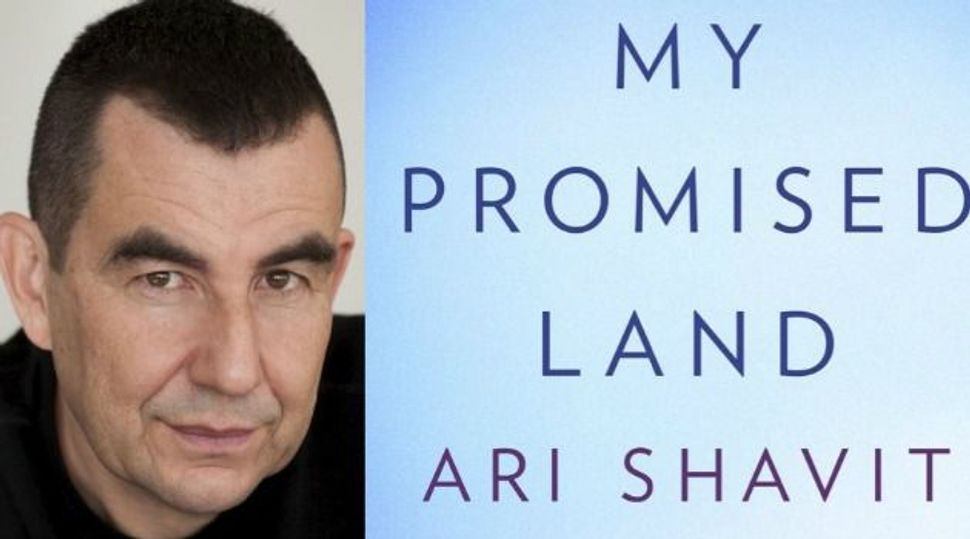 Both Sides Now: Ari Shavit is unsparing in his presentation of what he argues is the truth behind Israel?s founding stories. Image by Sharon Bareket

Ari Shavit wants to do nothing less than prompt a fresh discourse on Israel, something free and loving, critical and authentic, a conversation that accepts both the miracle and the true consequences of the Jewish state, one that will bring American Jews closer to the real Israel and Israelis closer to their own lost narrative.

Shavit’s new book, “My Promised Land: The Triumph and Tragedy of Israel,” arrives with great expectations — winning the inaugural Natan Book Award before it was even finished. It is a sweeping history framed as personal narrative, reflecting two intertwined journeys: the author’s attempt to understand his own family’s Zionistic evolution, and his country’s tortured politics.

“I tried to bring back what I think we’ve lost,” Shavit told me. “We lost our own narrative. It was lost in the details, the daily drama, the partisan politics. I hope to bring back the bigger picture and put it into the context of an unbelievable story.”

We were talking in the Asiate restaurant, atop the Mandarin Hotel on Columbus Circle — with a stunning view of the the southern edge of Central Park — on one of Shavit’s rare trips to New York before his book’s publication.

Shavit, who will turn 57 later this month, is an urbane man with the mellifluous English of an Abba Eban and the manners of a diplomat. He comes by these things honestly. The narrative of “My Promised Land” opens with the Right Honorable Herbert Bentwich, Shavit’s great-grandfather, leading a group of Zionist pilgrims to Palestine from London in 1897. Bentwich’s children, Shavit’s grandparents, settled in the wine-producing colony of Zichron Ya’acov a century ago, tethering Shavit’s family to the Land of, and eventually the State of, Israel.

So Shavit is pure sabra, with an Anglo inflection. He has risen to the top of the intellectual elite in Israel — a senior correspondent for Haaretz since 1995, a leading commentator on Israeli television, so well known among American journalists that an excerpt of his book was first published in The New Yorker.

But for all his outward sophistication, Shavit appears ill at ease with making a fuss about his own work in the way that’s become expected today. He may look as if he belongs at a hushed table on the 35th floor, but I sense that he’d be just as happy with a coffee in a crowded cafe along Dizengoff.

Shavit is unsparing in his presentation of what he argues is the truth behind Israel’s founding stories. The book is composed chronologically and thematically, with a specific historic event, project or person standing in for a significant turning point. Some chapters will make a Jewish reader swell with pride, like when Shavit relates a stirring history of Rehovot, where he was born, drawing a warm painting of peaceful farmland and fragant orange groves.

But he also offers a deeply disturbing chapter on the “dirty, filthy work” of the expulsion of Palestinians from Lydda in 1948 that is unlike anything taught in Hebrew school. Most damning is the brutal intentionality of it all, the realization that for all the heartache caused by the decimation of a Palestinian village, “if it weren’t for what happened in Lydda, Zionism would be done for.”

In Israel, Shavit is critical of both the left and the right. It’s a nuanced approach that may not translate well for that segment of the American audience that prefers to view Israel as either heroic miracle or oppressive colonizer. But I appreciated the challenge, even if it made me uncomfortable at times. I found that the dialectic he introduces in the beginning of “My Promised Land,” and in references throughout is an insightful way of understanding the pitfalls of viewing Israel from only one perspective.

“For as long as I remember,” he writes, “I remember fear. Existential fear.” Wars, terrorism, vicious threats from countries in Israel’s tough neighborhood. But he also writes, “For as long as I can remember, I remember occupation.” His experience in the Israel Defense Forces shaped his politics, turning him into a self-described and active peacenik.

Both ends of the political spectrum ignore or downplay this duality. “We have to see both the miracle and the tragedy,” he told me as we picked at our plates and he sipped a glass of white wine. “My plea to the left is to look at the human story, which is remarkable, with all the sins and problems. To the other side, I say: ‘You love Israel in such a dogmatic, fanatical way that you can’t really love it. You’re making something artificial.’”

Shavit wants the reader to accompany him on his journey as he sorts through these two opposing forces. He writes in the present tense, even when relating history a century old. This can feel forced, jarring, especially as he moves back and forth in time. But I sense that he wants the reader to feel events unfolding firsthand, closely and immediately. And sometimes — thanks to the vividness of his writing — we do.

The story begins when Herbert Bentwich embarks on his unlikely pilgrimage. It continues through the heroic founding of kibbutz Ein Harod, on to Rehovot and Lydda, then goes to the building of the nuclear reactor at Dimona, the birth of the settlements, the promise of peace, the swelling political power of Aryeh Deri and the rise of what Shavit calls “Oriental Jews,” and finally reaches the present.

This is where his analysis becomes deeply troubling. Shavit begins discussing the past decade or so by asking, “What went wrong?” As futile and malevolent as the occupation is, he writes, “it is not the source of all evil.”

Instead, he sees the disintegration of the Israeli republic, brought upon by the utter failure of political and civic leadership and by the unwillingness or the inability of the nation’s elite to display the single-minded drive and discipline, the self-sacrifice and communitarian spirit, that characterized Israel in her first 50 years.

“We are not really sure who we are,” he writes at one point.

The same could be said of American Jewry, which is going through its own anxious introspection at the moment, and Shavit says there is a “total analogy” between the two narratives. The first half of the 20th century was “the worst ever” for the Jewish people; the second half — punctuated by Israeli sovereignty and the blossoming of the American Diaspora — was a time of extraordinary success. “Parallel miracles,” Shavit calls them.

“And now both are challenged in a serious way,” he said as the coffee arrived. “I would not persuade one American Jew to make aliyah. We in Israel need a strong American Jewish community. Israel’s success is about state building. The amazing success of American Jewry is about community building. American Jewry depends on our existence, and vice versa.”