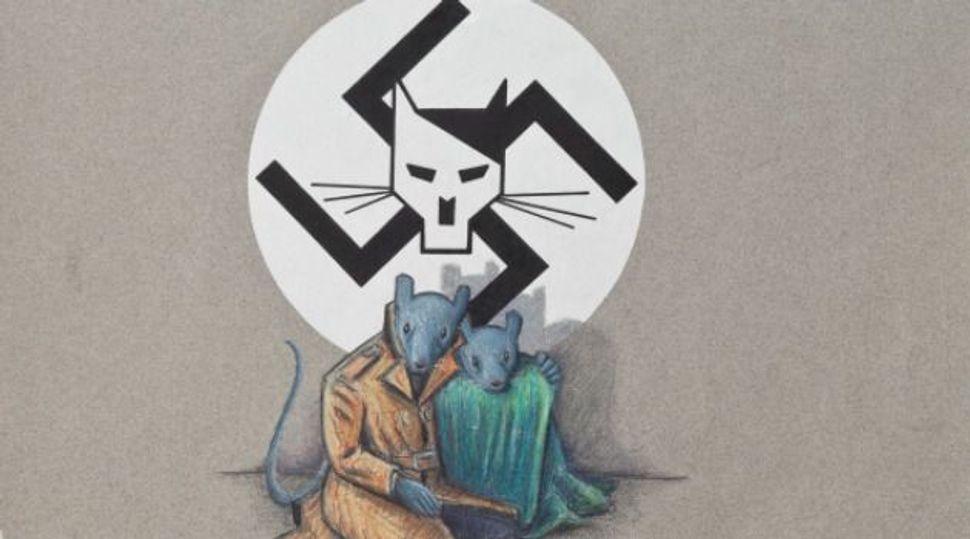 The Maus That Roared: The new exhibit at the Jewish Museum New York features art from Spiegelman?s work in the ?comic? underground and panels from ?Maus,? which won the 1992 Pulitzer Prize and helped to legitimize the graphic novel genre. Image by Copyright Art Spiegelman. Courtesy Pantheon Books.

Like a handful of other artists and thinkers of the past 50 years — Allen Ginsberg, Bob Dylan, Steve Jobs and Steven Spielberg come to mind — Art Spiegelman has transformed the medium in which he works so radically, and influenced the artists following in his shadow so completely, that society itself has been altered. Even people who have never heard of him experience the world differently because of what he’s done.

Spiegelman’s great accomplishment was taking the comics (the funny pages, as they used to be called), America’s pulpiest, most disreputable art form, and using them to storm the barricades of high art. After “Maus,” his book-length memoir of his parents’ experiences of the Holocaust and the effects their damaged psyches had on his own life, won the Pulitzer Prize in 1992, the tastemakers and gatekeepers of American culture could never again dismiss comix as plebian and vulgar. When you read a “graphic novel” like “Persepolis,” or watch a serious-minded animated film like “Waltz With Bashir,” you’re doing so because Spiegelman carved out the cultural space for things like this to exist.

When you smirk over a full-page, multi-panel comic essay in The New York Times, know that its mix of personal experience and cultural criticism wouldn’t have been possible without Spiegelman’s precedent. And though he would argue that he’s just the figurehead for a long line of comic artists that stretches back to Krazy Kat’s George Herriman and the MAD magazine crew, and continues beyond him with people like Chris Ware, if not for him, the comics in America in 2013 would be all Superman and Batman all the time.

But how did a schlumpy, nerdy Jewish kid from Queens come to have such an effect on our culture? And what happens to a neurotic, near-suicidal like Spiegelman after he’s become a great success? “Art Spiegelman’s Co-Mix: A Retrospective,” the comprehensive exhibit currently on display at New York City’s Jewish Museum, does an excellent job of mapping answers to these questions and illuminating the relationship between Spiegelman’s magpie talent and the success he has achieved.

The exhibit hinges, as it must, on “Maus,” and it contains an exhaustive archive of original panels, along with studies, sketches, research materials, and the full transcript of the interviews between Spiegelman and his father that define the form and narrative of the book. For obsessive fans (or Holocaust junkies), there’s a lot here worth scrutinizing: his parents’ Auschwitz arrest record; reconnaissance photos of Birkenau; booklets of drawings and text created by survivors that Spiegelman used as research. What comes across most is how hard Spiegelman worked. Some pages of the book were reworked six or seven times. One notebook page contains 30 or 40 variations on a single line of dialogue.

But “Maus” has become such a touchstone of our culture that in some ways it’s the least interesting part of the exhibit. It’s like a Rolling Stones song — “Wild Horses” or “Satisfaction,” maybe. Yes, it’s great, but really, is there any reason to ever listen to it again? What the “Maus” section of the exhibit does best is focus the dialectic between Spiegelman’s work from before and after he became an acclaimed artist and cultural figure.

Spiegelman’s early years consisted of working in the funky patchouli-scented trenches of the New York and San Francisco Comix Underground. That’s what they called themselves, and with that spelling, that leering, oversexed, drug-addled and defiantly countercultural environment epitomized by the Keep On Truckin’ logo that his contemporary R. Crumb created for the Grateful Dead.

In magazines, such as The East Village Other, Real Pulp, Snarf, Paul Krasner’s legendary The Realist and Arcade, which Spiegelman also edited, he published strips and short, three-to-four-page visual stories, and because these rags aspired to contraband and were sold for a nickel, or maybe a dime, to hippies and addicts and assorted dropouts, he could write in any style he wanted about anything he chose. In these early pieces, one can see his aesthetic tactics and thematic tropes develop: the self-loathing; the performance of neurosis as filtered through a specifically Jewish anxiety; the blunt, sometimes violent, often purposeful, faux-artlessness of the story; the appropriation of visual styles from sources both high and low; the experiments with form as content, and the casting of himself as the failed hero of the stories he chose to tell.

Thus, “Ace Hole, Midget Detective,” in which a square-jawed gumshoe follows Picasso’s Weeping Woman into a black hole in the fabric of reality, and “Real Dream: Dr. Schpiegelmann’s Dream Interpretation,” in which an obese woman dances around at a raucous party, flailing a giant sausage between her legs, as the text explains the Nazi erotics contained in the imagery’s symbolism, and “Centerfold Manifesto,” an anti-corporate, anti-establishment freak flag Spiegelman created, in collaboration with his cabal of comix artist friends, that lays out a fair definition of their anarco attitudes and, like all manifestos, reserves its greatest loathing for those who might sell out.

The most crucial of Spiegelman’s early pieces, “Prisoner on the Hell Planet,” is a four-page narrative (which would eventually be folded, in streamlined form, into “Maus”) describing his mother’s suicide and the self-loathing it inspired in him.

If Spiegelman’s other early work consists of a messy, sprawling chronicle of his obsessions — with the history of comix, the variety of aesthetic possibilities the form allows, the unequal co-dependence between high and low art, surreal self-reflexivity as a narrative strategy and, most of all, the psychological and emotional trauma of his own life —“Hell Planet” points toward what this same material will look like when finessed into a coherent and extended narrative.

The story is presented as a first-person account, narrated from the distance of memory by an authorial stand-in who, throughout the piece, wears the striped pajamas of the concentration camp, and it’s as much about Spiegelman’s own feelings of guilt as about what his mother did to herself and why. As the horror of what’s happened sinks in, the style of the imagery morphs from the busy, nervous vernacular of cartooned reality into something starker, with thicker, spikier lines — an echo of German Expressionism.

Mirroring the imagery, the story, too, abandons the real in favor of an expressionist logic, culminating in the Spiegelman character howling the excoriation, “You murdered me, Mommy, and you left me here to take the rap!” No closure, no release, just raw, unending pain.

Spiegelman has said that “sometime in the ’70s, when I was involved in underground comix, I had the idea that we need to make a Faustian deal with the culture.” Both his savvy and his discomfort with the art-commerce transaction are visible in the work he did over the next decade. He worked for Topps Chewing Gum, creating Wacky Packages and Garbage Pail Kids — which would become iconic fetish items of the ’70s and ’80s — shilling his talent for the man while introducing the subversive vernacular of his spiritual subcultural brethren to a new, nationwide audience of 8-year-olds. At the same time, he and his wife, Francoise Mouly, doubled-down on their belief that creativity should cede nothing to the market. They published a magazine called Raw, and it provided an outlet for comix artists long after the scene he’d been a part of disappeared.

Around the same time that he created “Planet Hell,” Spiegelman wrote a three-page spread about a Holocaust survivor who tells his son a horrific bedtime story. It involves frightened mice, and cats in sleek uniforms. He titled it “Maus,” and for the next nearly 20 years, he became more and consumed with telling this story. The resulting work is a culmination of everything he’d been working toward. It translates the raucous energy of his early work into something more aesthetically contained, something understandable to the culture at large. It’s an obsessive work, and deeply, honestly wrought, but it’s also a calculated product, pitched toward the American consumer in a way that can’t easily be dismissed. As Spiegelman has said, “Holocaust trumps art all the time.”

From the evidence of the exhibit, it’s clear that Spiegelman has been asking himself “What now?” ever since.

There is, of course, the black-on-black cover for The New Yorker, which he created during the week after the attacks on the World Trade Center, and the series of angry, wounded, politically and personally nuanced pieces collected in “In the Shadow of No Towers,” the first of which was published right here in the Forward. Spiegleman’s best work rises out of his own pain, and here was a subject that matched his talent.

He’s illustrated an edition of Joseph Moncure March’s “The Wild Party.” He’s taken on commercial work, book covers, those New Yorker covers we all know. He’s published a few children’s books. He’s done a little of this and that, and though his crisp, graceful iconography is always strong, nearly none of it matches the gut-punches and mind-blows of “Maus” and of his early work. The final selections of the show are more artifact than art. No matter how accomplished and professional the product is, it feels like the work of a highly accomplished illustrator, not like the groping, grasping, yearning, sobbing thrashes of an artist struggling, out of necessity, to save, or at least understand, his own life.

There’s a sad and lonely lesson here. Look at Art Spiegelman, wearing his maus mask, slumped mournfully in front of his easel. He mined his own trauma; he mastered the metaphors of his life and became the most influential cartoonist of his era, only to discover that he’d turned into a metaphor for himself. That, as the devil could have told him way back when, is the price of success.

Joshua Furst is the author of “The Sabotage Café” (Knopf, 2007) and is a frequent contributor to the Forward.