How ‘Stars of David’ Made Leap From Page to Stage 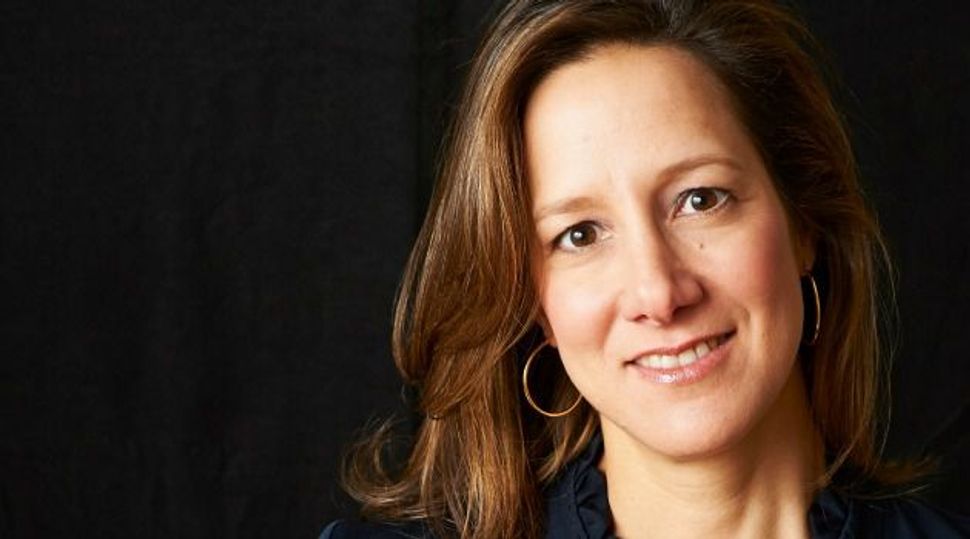 Merrily She Rolls Along: For Abigail Pogrebin, the musical is the culmination of a lifelong obsession. Image by Lorin Klaris

I’m hesitant to admit that I believe in the concept of bashert, the notion that something was inevitable or orchestrated.

But I also think it’s no accident that I’ve landed at this entirely unexpected juncture, where my childhood obsession with theater has joined my adult profession as a writer and fueled the Jewish exploration that has come to matter more to me than I would have ever predicted.

Somehow, an off-Broadway musical has materialized from “Stars of David,” a book I wrote 10 years ago about Jewish identity. When I interviewed 62 public figures about their connection to — or detachment from — their birthright, it obviously never occurred to me that these conversations would someday take musical shape, written by some of my childhood theater heroes: Sheldon Harnick, Marvin Hamlisch and my newer favorites — Jeanine Tesori and Duncan Sheik.

But these days, instead of staring at my laptop, I’ve been sitting in a small theater called the DR2, watching four talented actors sing the stories of the “celebrities” I spoke to years ago — Justice Ruth Bader Ginsburg, Leonard Nimoy, Joan Rivers and others.

Director Gordon Greenberg is crafting what he’s dubbed “The Jewish ‘Working’” — referring to the 1978 musical based on Studs Terkel’s interviews with members of the American workforce. Each song in “Stars of David” is based on a specific interview from my book, composed by a separate songwriter or songwriting team. Sheik and Steven Sater, of Tony-winning “Spring Awakening” fame, wrote the song for Kenneth Cole’s chapter. Amanda Green (recently nominated for “Hands on a Hard Body”) contributed the songs for Joan Rivers and Fran Drescher. Alan and Marilyn Bergman (“Yentl”) adapted their own chapter. The portraits that make up the show are those that have survived the workshop process after three years of trial and error.

Perhaps not surprisingly, I see myself in every lyric — in the leitmotifs of Jewish inconsistency, pride, responsibility and even self-parody. I normally consider myself a fairly detached reporter when it comes to researching a story. But I haven’t felt the least bit detached from these songs or from the testimonies that gave rise to them. The original interviews triggered a Jewish alertness back when I started the book, in 2003, and continued to tug as I traveled to speak at Jewish community centers, synagogues and federations around the country. Now that this dialogue is continuing musically, the examination feels more visceral than when it was just on the page. As each new song was delivered electronically to my email box in an mp3 file (or in those memorable instances when the composer played the song live for me and the producers), the words triggered a different Jewish memory or association.

Tony Kushner’s song likens Judaism to a “house so big,” which has a “room for you in it somewhere, if you want.” That encapsulates what I’ve learned about the tradition: You can meet it wherever you are, at whatever stage of your life.

Joan Rivers’s description of the rare simplicity she feels in synagogue every Yom Kippur, as contrasted with her manic daily life, echoes my gratitude for how the High Holy Days force me to get off the hamster wheel.

Gloria Steinem was a center of gravity at the feminist Seder I attended growing up, and her song in the show reminds me of how that ritual — co-created by my mother, Letty Cottin Pogrebin in 1976 — changed my view of tradition. I’ll never forget watching all the women go around the table, washing each other’s hands and naming their foremothers.

Each song is a story that retraces my steps, makes me ask myself questions I’d only asked others, confirms that the answers are never one-dimensional. And I am acutely aware of all the random connections, which now don’t feel random at all.

Ruth Bader Ginsburg, as it turned out, had experienced, as a teenager in Brooklyn, the exact same exclusion from the mourner’s minyan that my mother had suffered as a teenager in Queens. Both their mothers died of cancer and were forbidden to say Kaddish because they were female. I wrote the Ginsburg lyric about that specific moment, and Tom Kitt, whose wife grew up with my close friend (another coincidence) in Scarsdale, N.Y., composed the song.

Which leads me to Aaron Sorkin, who also grew up in Scarsdale, and whose song — by Richard Maltby and David Shire (“Baby”) — touches on that unmistakable, as Sorkin puts it, Scarsdale-“sound-of-intelligence,” which he grew up hearing and which, he said, informs all his scripts.

My childhood family friend, Aaron Harnick, whom I used to ignore on play dates because his older sister was the one I came to play with, is now a producer who hatched the idea for a show; he read my book and thought the interviews could become songs.

He knew that the perfect A-list producer would be Daryl Roth, who has an intuitive feel for Jewish material. When Roth took on the project, it just so happened that her grandchildren were studying for their b’nai mitzvah and her grandson was being tutored by the same cantorial student tutoring my daughter — the power singer Sheera Ben-David, who has a cabaret act on the side.

Aaron Harnick’s uncle, Sheldon Harnick, agreed to write a song early on. And like so many people my age, “Fiddler” was the first show I ever saw. And Chava was my freshman-year role in college.

The plainest convergence wasn’t any one coincidence, but rather my long-standing passion for musical theater. I grew up as a show tune addict — a sap for the soaring refrain or that “tune you can hum,” to quote Stephen Sondheim. At age 16, I had the improbable good fortune to be cast in a Broadway show — a Sondheim musical called “Merrily We Roll Along,” directed by Harold Prince and co-starring Jason Alexander. Sadly, it closed after only two weeks. One lyric fragment has come rushing back to me as I’ve watched this recent adventure unfold: “How did you get here from there?”

Back in 2003, when I decided to ask prominent American Jews to tell me whether their Judaism mattered, I was basically unmoored myself. A twice-a-year synagogue-goer who lit Friday candles occasionally, I attended two annual Seders (plus the feminist edition) but didn’t really understand the origins of the Haggadah. When my first child, Benjamin, was carried to the bris pillow from his bassinet, I looked through tears at the yarmulke tilted on his tiny head and asked myself if I could possibly explain to him one day why I’d chosen to do this. I realized how little I knew, how ill equipped I was to pass on anything.

But then I started to study Torah to prepare myself for the interviews in my book and to compensate for the Jewish education I never received. This led me to choose to become an adult bat mitzvah, which led me to seek out more study (at the Jewish Theological Seminary, Mechon Hadar, Limmud NY), which led me to inherit the family Seder duties.

The final rung on the ladder was a casual visit to Central Synagogue for a friend’s daughter’s bat mitzvah. The compelling service made me make the impulsive decision to join. It turned into a fast immersion, which now lands me in the synagogue’s pews most Friday nights.

This is where I find myself today. And no, it doesn’t feel accidental.

I grew up loving musicals and was lucky enough to be in one. And now, my first book has become one.

I grew up half-in, half out Jewishly. I listened to famous Jews describe themselves the same way, and decided I wanted to go deeper myself.

I’m not the first to discover the complexity in this particular inheritance of ours, but I do think the whole megillah somehow lends itself to music.

So, call it unlikely, but “Stars of David” is now a musical. And I’m more Jewish. And I think it was bashert.

*Abigail Pogrebin is the author of “Stars of David,” “One and the Same” and “Showstopper.” She moderates an interview series at the JCC in Manhattan. *

How ‘Stars of David’ Made Leap From Page to Stage