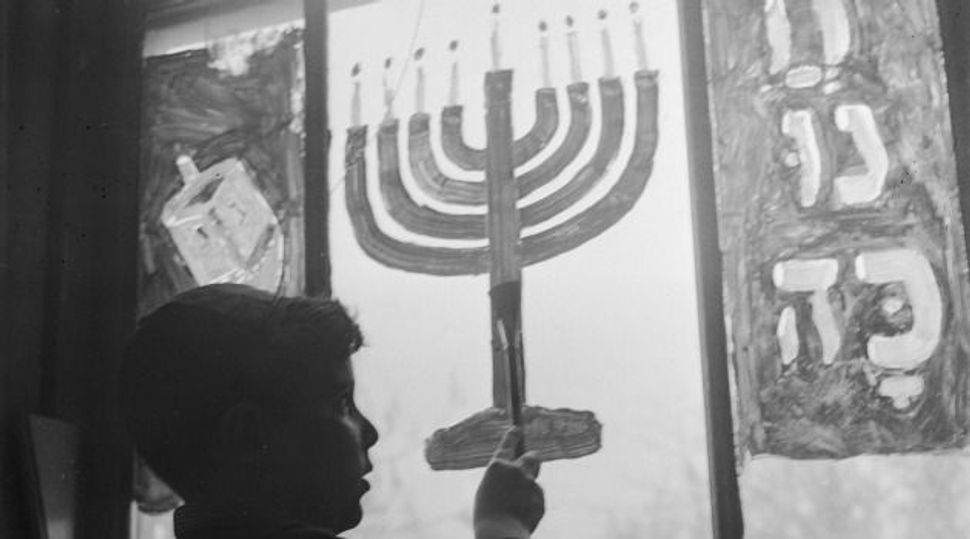 Keeping the Flame: Hanukkah celebrates the success of the Maccabean revolt. Image by Getty Images

“While reading a spy novel set in Salonika, I came across the word andarta as a term for Greek highlanders who fought as guerrillas against the Turks [in Greece’s early-19th-century War of Independence]. And while in Israel, I saw many monuments commemorating fallen soldiers, each called an andarta, too. Is there any connection?”

Linguistically, there probably is. While I haven’t been able to find andarta used for 19th-century Greek independence fighters, it could well have been a local term current in only part of Greece, throughout which the guerrillas who fought the Turks were more commonly known as klephtes or armataloi. (In an earlier period, the armataloi or “arms-bearers” were mercenaries hired by the Turks to combat the klephtes or “robbers,” bands of brigands operating from mountain strongholds. But the two groups joined forces against the Turks during the uprising.) Andarta most likely derives from Greek andreios, “brave” or “courageous,” which in turn comes from andras, “man” or “male” — a word that gives us English “android,” and whose related form of anthropos yields “anthropology.”

Hebrew andarta originally comes from Greek andriantas, a statue of a man or god in manlike form. Ancient Greek and Roman rulers commonly had such statues of themselves erected in public places, where it was customary for one to bow to them in passing. Rabbinic sources debated how permissible such obeisance was for a Jew. In translating, for example, the verse in the book of Esther, “And all the king’s servants at the king’s gate knelt and bowed to Haman, but Mordecai neither bowed nor knelt,” the Aramaic Targum says that it was not before Haman in person, but before a statue (andarta) of him, that Mordecai praiseworthily refused to prostrate himself. On the other hand, the talmudic tractate of Sanhedrin rules, “He who sees a royal statue [andarta] and bows to it — if he regards it as a god, he is culpable [of idol worship], but if he does not, he has done no wrong, it [the bowing] being merely from love or awe [of the ruler].”

Be that as it may, on the 15th of Kislev, 168 BCE, when, according to the Book of Maccabees, the Greek ruler of Syria, Antiochus Epiphanes, set up an andarta of himself in the guise of the god Zeus by the altar of the Temple in Jerusalem, there was no question of its permissibility; indeed, it was one of the main incitements leading to the Maccabean revolt, whose success we will celebrate in a few days by lighting the Hanukkah candles. The Book of Maccabees’ term for this statue, “the abomination of desolation,” is drawn from the Hebrew of the book of Daniel, in which — apparently in relation to the same desecration of the Temple — it is called shikutz ha-meshomem. This is a trilingual play on words. The Greek “Zeus Olympios” was known in the Eastern Mediterranean by his Aramaic name of Ba’al Shamin, “the Ba’al of the Heavens”; shikutz, “abomination,” is a frequent word in the Bible for a pagan god like Ba’al, and meshomem, “desolating,” is a pun on Hebrew shamayim, “heavens.”

To get back to Mr. Krauthamer’s query and to our own times: With the end of Greco-Roman antiquity — and with it, the custom of publicly displayed royal statuary — the word andarta disappeared from the Hebrew language. In the first volume of Eliezer Ben-Yehuda’s monumental Dictionary of the Hebrew Language, which came out in 1908 and included all Hebrew words starting with the letter alef, andarta did not even appear. The first prominent modern memorial to fallen Jewish heroes in Palestine, Abraham Melnikov’s 1934 statue of a roaring lion, commemorating the pioneers who died in the 1920 battle of Tel Hai in the Galilee, was not called an andarta, either. It was referred to as a matseva — a word traditionally designating the headstone on a grave.

It is hard to say just when andarta entered Hebrew as the accepted word for a war memorial of the sort found all over Israel today. The earliest documented use of it is, oddly, in some light verse published in 1950 by Nathan Alterman, a leading 20th-century Hebrew poet with a strong grasp of Jewish sources. Reacting to a government refusal to cancel purchase taxes on books and paper because they were not considered crucial commodities, Alterman wrote that if this was the official attitude, it was time to erect an andarta shel even, “a stone monument,” to the printed word. Perhaps it was he who reintroduced andarta to modern Hebrew; perhaps there were others before him. It is ironic, in any event, that a word once used by the rabbis to describe a Greek affront to Jewish religious sensibilities should today refer to memorials for Israel’s war dead — and we’ve come a long way from anti-Turkish Greek guerrillas.