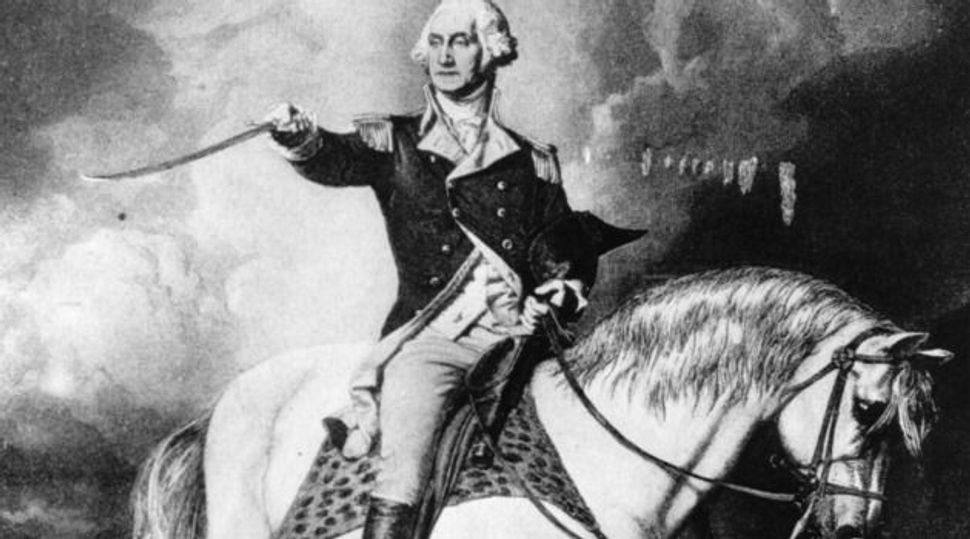 Father of Our Thanksgivukkah: After a critical victory over the British at Saratoga in the fall of 1777, the Continental Congress encouraged the colonies to celebrate a day of Thanksgiving, which all thirteen colonies did, at the behest of General George Washington, on December 18th, 1777. Image by Getty Images

If you’re one of the 9 million American adults who in any way identifies as Jewish (according to the recent Pew survey this includes anyone who has laughed at an episode of “Seinfeld” or sent back a meal at a restaurant), then you’ve undoubtedly heard of the Halley’s comet of holidays, the Y2K of yuletides: Thanksgivukkah™©®

Everyone seems to be talking about the rare convergence of the Jewish holiday of Hanukkah and the American celebration of Thanksgiving, which, for the first time since 1888 and the last time for over 70,000 years, will occur simultaneously during the first day/second night of Hanukkah (depending on how long it takes before your turkey is done).

But while you may learn elsewhere how to make pecan pie rugelach or buy a Kickstarted turkey-shaped menorah, there’s a deeper connection to be made between these seemingly disparate celebrations. Let’s begin with the first Hanukkah: We read in the second Book of Maccabees, a late second century BCE text written (ironically?) in Greek to encourage the Jews of the Alexandrian diaspora to celebrate the Jewish victory against the Greeks which occurred forty years earlier:

Maccabeus with his men, led by the Eternal, recovered the Temple and the city of Jerusalem…The sanctuary was purified on the twenty fifth day of Kislev…This joyful celebration lasted for eight days; it was like the Thanksgiving festival of Sukkot, for they recalled how only a short time before they had observed that holiday while living like animals in the mountains, and so they carried palm fronds and citrons, and chanted hymns of Thanksgiving to God who had so triumphantly led them to the purification of God’s Temple. A measure was passed by the public assembly that the entire Jewish people should observe these days every year.

So, according to II Maccabees, since Jews were too busy fighting a guerrilla war during the fall harvest festival of Sukkot, they made up for it with a “Sukkot in December” two months later, thereby creating a second eight-day holiday — this time giving thanks for a military success instead of an agricultural one. Therefore, the first Hanukkah was actually a delayed Thanksgiving, and so also technically the first Thanksgivukkah!

Let’s jump ahead about 2,000 years, to the time of the American Revolution. After a critical victory over the British at Saratoga in the fall of 1777, the Continental Congress encouraged the colonies to celebrate a day of Thanksgiving, which all thirteen colonies did, at the behest of General George Washington, on December 18th, 1777.

The Continental Congress continued to declare a yearly celebration of Thanksgiving in December throughout the War, and twice during the next five years the holiday overlapped with Hanukkah. The first American Thanksgivukkah occurred in 1779, when Thanksgiving fell on December 9th, as Jews lit the seventh Hanukkah candle. Two years later, on the heels of Cornwallis’ surrender to Washington at Yorktown, Jews lit the second candle on December 13th, 1781, as they told the story of a tenacious band of soldiers who prevailed over the massive army of an oppressive empire.

On that same day, all Americans celebrated Thanksgiving, for, as Congress put it, “it hath pleased the supreme Disposer of all Events…remarkably to assist and support the United States of America in their important struggle for liberty, against the long continued efforts of a powerful nation.”

A national day of Thanksgiving was an irregular occurrence during the first fifty years of the United States — moving back and forth from fall to winter to spring, when it was even declared at all. Madison’s 1815 proclamation was the last National Thanksgiving for nearly 50 years. Then, in 1863, just over a month before delivering the Gettysburg Address, Abraham Lincoln called for a national observance of Thanksgiving on the last Thursday in November.

America has observed Thanksgiving near the end of November every year since Lincoln’s proclamation, which means that the only other moment in U.S. history when Hanukkah came early enough to correspond with Thanksgiving was in 1888, in the midst of the historically large wave of Jewish immigrants making their pilgrimage to the Golden Land across the sea, to avoid religious persecution in Russia and Eastern Europe.

On the surface, Thanksgivukkah 2013 seems to have a lot in common with the one in 1888 (minus the commemorative T-shirts). The country was still recovering from a massive storm that hit the eastern seaboard earlier that year. There was an intense rivalry between Democrats and Republicans, often leading to political stalemate as each side utilized massive political machines in an attempt to sway the delicate balance of power. Sharp divisions ran along religious, cultural and ethnic lines.

Economically, U.S. society was in the midst of the Gilded Age – a time of huge technological advances, great growth and prosperity, yet one also marred by a great economic disparity between the swelling ranks of the poor and the privileged upper classes.

In June of 1888, a poem was first published in the San Francisco Examiner. Ostensibly about baseball, perhaps there’s a reason why the poem’s full title is, “Casey at the Bat: A Ballad of the Republic.” Read carefully, the text can be interpreted as an indictment of the failures brought about by the arrogant, calculated cynicism of 1888 – and is just as relevant today. Mighty Casey strikes out not because he was overmatched by the opposing pitcher, but because he passed up two perfectly good pitches because they “ain’t my style.” Despite the crowd’s chants of “kill the umpire!” it is Casey who is unable or unwilling to venture forth any effort towards victory until it is too late. Author Ernest Thayer might as well have said (in 1888 or 2013), “I have seen the Mudville Nine, and it is us.”

This failure to act is, of course, the opposite message from both the Hanukkah and Thanksgiving stories. When the tenacious souls of Modi’in and the Mayflower emerged from the wintery darkness of their caves and their ship’s hull, battle-weary and diminished in numbers, they set forth to sanctify their reclaimed home with the work of their hands. The miracle of these stories is not the unexpected bounty of light nor harvest. It is the willingness of those who have fought so long for this moment to now pick up a broom or a hoe, to push aside a tiny bit of chaos and hopelessness and begin the difficult everyday work of real life which happens after the battle is won. This Thanksgivukkah, as I polish off my herbed-latke stuffing and gravy-injected deep-fried biscuits (take that, cronuts!), I will take a moment to give thanks – not at the holiday table, but later, as I haul myself into the kitchen to do the dishes, clean the wax out of the menorah, and give a wink to John Carver and Judah Maccabee, who would most certainly have done the same.

Eric Schulmiller has served as Cantor of The Reconstructionist Synagogue of the North Shore for the past 15 years.