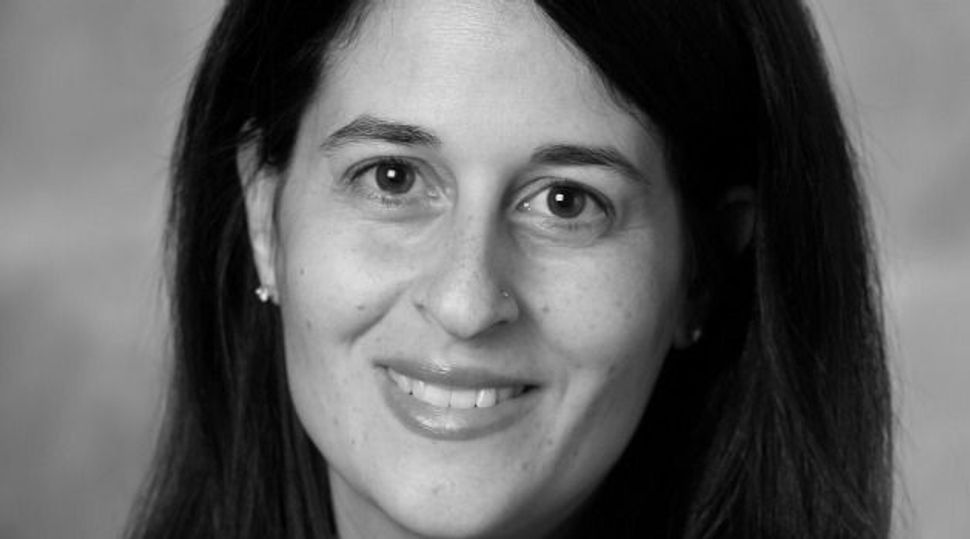 Outspoken Daughter: Leanne Lieberman refused to tone down the title of her latest book, ?Lauren Yanofsky Hates the Holocaust.? Image by Bernard Clark

If I were making a list of topics I am not looking forward to discussing with my young daughters, the top three might be (and I am not sure in what order) sexual desire, the Holocaust and Israel’s treatment of the Palestinians. So I don’t know whether to be grateful for Leanne Lieberman’s books or afraid of them. On one hand, maybe they’ll let me off the hook and do all the discussing for me. On the other, they are sure to leave my girls with plenty more questions.

In 2008, Lieberman, who grew up in a Conservative Jewish home in British Columbia, published “Gravity,” a young-adult novel about Ellie Gold, an Orthodox teenager who is slowly realizing that she is a lesbian. Ellie is passionate about her religion, but is unsure how her sexuality will fit into her religious life. In 2009, the Forward called the book “the definitive novel” about Orthodox teen lesbians, “since there isn’t exactly a surplus of teen Orthodox lesbian fiction floating around.”

Then, as if to see if she could discomfit Jews even more, in 2010 Lieberman published “The Book of Trees” about teenage Mia, an incipient Zionist whose summer trip to Israel takes a confusing turn when she begins to learn about what Jews have done on lands that used to belong to Palestinians. And as if she didn’t have enough confusion, Mia falls in love — and has sex — with a non-Jewish tourist.

And now Lieberman is back with the brilliantly titled — if one wants to offend the last remaining unoffended Jews — “Lauren Yanofsky Hates the Holocaust,” about another Canadian teenage girl, who wants to resign her membership in the tribe because she is so sick of Holocaust education.

I met Lieberman at a literary festival in Kingston, the midsize Canadian town on the shores of Lake Ontario, where she lives with her husband and two young sons. When she last spoke with the Forward, in 2008, she described how “Gravity” was influenced by her brother coming out to her as gay while they walked through a religious neighborhood in Jerusalem. Two books later, it seems that Lieberman has found her niche as a young-adult novelist with a knack for making Jews uncomfortable.

“I’ve always wanted to be a writer,” Lieberman told me. “When I was a little kid I read the All-of-a-Kind series by Sydney Taylor. My mother was a technician in an allergy lab, and she had a patient who was a librarian. My mother was telling her about her daughter who loved to read, and the librarian said, ‘Oh, she can write to authors.’” Lieberman wrote a letter to Taylor, who was, it turns out, not available to write back. “She had passed away,” Lieberman said, “but her husband wrote back. I got a letter from Ralph Taylor.”

Having decided to be a writer, Lieberman later entered a master’s program in creative writing, where a first draft of “Gravity” was her thesis. As it turned out, Jewish communities, even religious ones, had an easier time with the first novel’s lesbianism than they had with the second novel’s critique of Zionism.

“She goes to a yeshiva in Israel to study,” Lieberman said, summarizing the main character’s journey in “The Book of Trees.” “And she doesn’t fit in so well. She’s had sex, played in bands. She meets this guy who is busking in Jerusalem, and he is not Jewish, and through him she learns a lot about the Israeli occupation of Palestinian lands. That tells you something about my politics. I spoke at the gay shul in New York, and afterwards I met an agent who said I was really lucky, because I never could have gotten it published in the U.S. It’s a pretty serious book.”

Lieberman said that “The Book of Trees” got far less attention than “Gravity.”

“It’s kind of an uncomfortable topic for Jewish people,” she said. “There is a segment of population that wants to talk about it” — the occupation — “and others don’t want to make chit-chat about it.”

Lieberman described a talk she gave in Kingston, where a Jewish friend of hers was one of only two Jews in the audience: “Everybody else who came was non-Jewish, and she became uncomfortable because everyone was agreeing with things I had to say. It’s one thing for Jewish people to get together and say the Israeli government is doing some crazy things, and it’s another for non-Jewish people to get together and say it. So she left partway through.”

As if questioning Zionism in her last book weren’t enough, Lieberman has found a subject in “Lauren Yanofsky Hates the Holocaust” that is, in its way, even more sensitive: the Jewish cult of victimhood. The main character, Lauren, is the daughter of a Holocaust studies professor, and by her teenage years she has grown sick of hearing about what happened to the Jews. She is, in fact, pretty well finished with Judaism — until a boy she has a crush on is caught playing a Nazi, in the style of Prince Harry. Having to think through her response to a peer’s making light of the Holocaust also forces Lauren to temper her own cynicism.

It’s hard not to relate to Lauren: She voices feelings that so many Jews think or whisper, but have trouble saying aloud. But she, too, emerged from specific incidents in Lieberman’s life. Lieberman teaches French, and a sixth-grader at a school where she once taught decided to make a Nazi armband.

“We confiscated it,” Lieberman said. “He claimed he had learned about the Nazis on the History Channel and didn’t know about the concentration camps. Which I bought — he was a kid, 11. I was like, ‘God, what do I do?’ I gave it to the principal, and said I would like her to speak to the student and I would like to be present. I didn’t think I could be coherent. She gave him a polite lecture about why the swastika was such a symbol of hate…. It was forgotten about. But it bothered me. I kept thinking about it. Then it bothered me that it bothered me. I, like Lauren, was done with the Holocaust — I had read too many books in my 20s.”

Lieberman’s father, while not a Holocaust historian like her character’s, volunteers for a Holocaust education society in Vancouver. And he had concerns about the title. My father wanted me to call it ‘Lauren Yanofsky Confronts the Holocaust,’” Lieberman said. “But I wanted readers to be like: ‘Yeah, enough of the Holocaust. Can we focus on something else? Can I say I am Jewish and not have people think about gas chambers?’ But I also wanted to write a book that, if you didn’t know about the Holocaust, you would learn something about it.”

And Lieberman has succeeded. What’s remarkable about her books is not the prose, which is adequately smooth, but the combination of courage and informativeness. If you gave your child the Lieberman corpus to read, she (or he) would learn about lesbian sex, the occupation of the West Bank and the Nazis. But she would also learn about ba’alei teshuvah, those who return to religious observance; about kosher laws, and about the minutiae of Jewish prayer. For a child from a Jewishly committed, or curious, family, there are few authors whose work might be more unnerving — but there are few authors whose work is more educational. Lauren Yanofsky might hate the Holocaust, but Leanne Lieberman really loves Judaism.

Mark Oppenheimer is the beliefs columnist for The New York Times, and the author of a new Kindle e-book, “The Zen Predator of the Upper East Side” (The Atlantic Books).