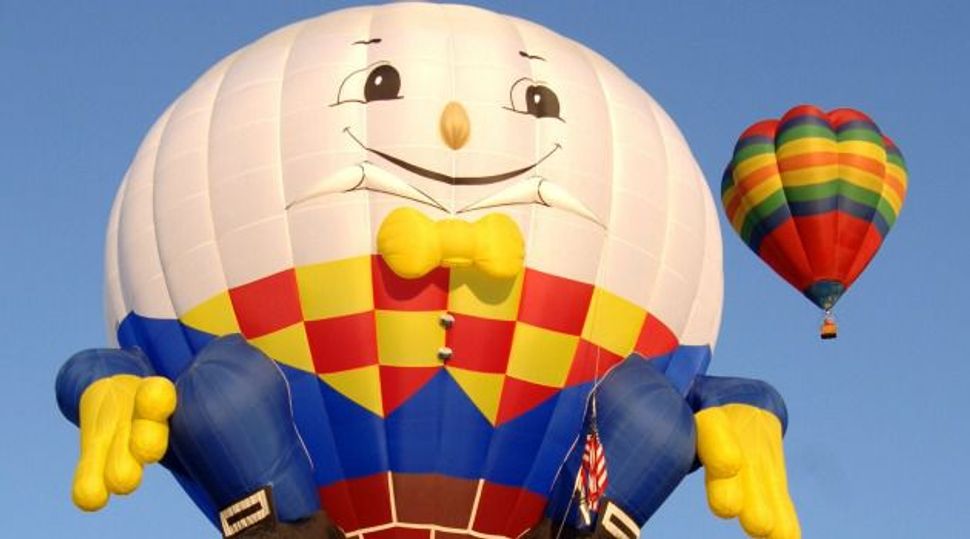 All the King?s Dirigibles: In ?Alice in Wonderland,? the character of Humpty Dumpty explains the concept of a portmanteau word like ?Thanksgivukkah.? Image by Getty Images

Given all the hoopla surrounding it, it’s surprising that only one reader has written in about “Thanksgivukkah,” the word coined for this year’s coinciding of Thanksgiving dinner with the first night of Hanukkah. The reader is Amy Mintz of Sugar Hill, N.H., who complains:

“This is such an assimilated-sounding combination! And it’s hardly a combination. It takes most of Thanksgiving and only one letter of the root of Hanukkah. If Hanukkah were to be an authentic part of this collaboration, it should be ‘Thanksgivnukkah,’ don’t you think?”

Indeed I do. Hanukkiving might be even better. Yet since we’re dealing with something that won’t happen again, so we’re told, until the year 79,811, I wouldn’t spend too much time arguing about it. By then, English may be an even more forgotten language than ancient Sumerian is today.

Whatever languages are spoken 77,000 years from now (unless we’re all communicating by brain chip long before that), portmanteau words will probably still exist in them. That’s a word that, like “Thanksgivukkah,” is created by running together truncated parts of two separate words. Sometimes these fusion words are mere jokes or curiosities, like “Thanksgivukkah” or “tiglon,” which is a cross between a tiger and a lion. (Personally, I’ve never encountered a tiglon, but if you ever do, that’s what you should call it.) In quite a few cases, however, they have entered our everyday vocabulary. Consider “smog,” “brunch,” “cheeseburger,” “newscast,” “motel” and other words that we no longer even think of as artificial creations. Others, like “guesstimate” or “stagflation,” though their artificiality is still felt, are now used regularly, too.

A portmanteau was, in its last, 19th-century incarnation, a leather suitcase that opened into two separate compartments. (The term is, fittingly, a portmanteau word itself, coming from French porter, to carry, and manteau, a coat; the original portmanteau was a French adjutant who carried an officer’s cloak or bag.) It was first compared with two fused words by Lewis Carroll in “Through the Looking Glass” (1872), his sequel to “Alice in Wonderland.” There, Alice is engrossed in conversation with Humpty Dumpty, whom she asks to explain Carroll’s immortal nonsense poem “The Jabberwocky.” After she recites its first lines of “’Twas brillig, and the slithy toves / Did gyre and gimble in the wabe; / All mimsy were the borogoves, / And the mome raths outgrabe,” the narrative proceeds:

“That’s enough to begin with,” Humpty Dumpty interrupted. “There are plenty of hard words there. ‘Brillig’ means five o’clock in the afternoon — the time when you begin broiling things for dinner.”

“Well, slithy means lithe and slimy…. You see, it’s like a portmanteau — two meanings packed into one word.”

By the late 19th century, “portmanteau word” had become an accepted term. English portmanteau words themselves, however, go back to at least the beginning of the century. Perhaps the earliest recorded instance of one is “gerrymander,” which dates to the American election campaign of 1812. In that year, Massachusetts’s governor, Elbridge Gerry, promoted and signed a bill that redrew the state’s electoral districts to the benefit of the Democratic-Republican Party, to which he belonged. (Yes, there once was such a thing; founded by Thomas Jefferson and James Madison, it was the main rival of Alexander Hamilton’s Federalist Party in the early years of the Republic.)

Some of the new districts, carved out of old ones, had strangely irregular shapes, which led to the appearance of a cartoon in the pro-Federalist Boston Gazette, depicting one such district in Essex County north of Boston as a winged-and-clawed salamander, with the townships of Methuen, Haverhill, Amesbury and Salisbury composing an elongated neck twisting off to one side to the Atlantic Ocean. Accompanying the cartoon was an editorial calling this creature a “Gerrymander,” and the word was soon picked up by other papers. “Gerrymandering” being a common practice in both America and England, the term spread and was given official status by its inclusion in 1868 in the British-published National Encyclopedia, which defined it as “a method of arranging election districts so that the political party making the arrangements will be able to elect a greater number of representatives than they could on a fair system.” Humpty Dumpty would have been pleased.

And speaking of new words and of the spirit of Thanksgivukkah, a letter from Evan Rock declares:

“I would like to propose that we call the new breed of folk around us, as indicated by the Pew [Research Center] report and acclaimed by such papers as The New York Times and the Forward, ‘Pewish.’ They celebrate in their own way Jewish, Christian and Muslim holidays. They celebrate their own newness and uniqueness.”

I myself might have called them pewtative Jews. One way or another, though, Thanksgivukkah is certainly a Pewish holiday.

A happy Hanukkah and Thanksgiving to you all!