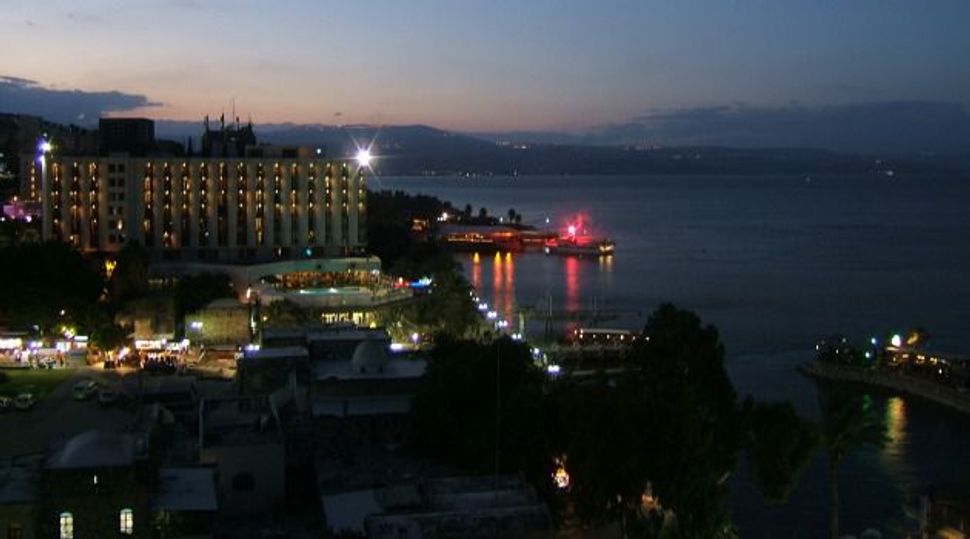 View From the Top: Shemi Zarhin?s characters live in Tiberias along the shores of the Galilee. Image by Wikimedia Commons

The director and writer of some of the most memorable and honored Israeli films, including “Bonjour Monsieur Shlomi,” “Aviva My Love” and “The World Is Funny,” Shemi Zarhin creates a world in his movies. And now, in his first novel, he manages to do much the same thing. Zarhin’s is a universe that few non-Israelis know or contemplate when they think about or visit Israel; it is populated by the working-class people of Tiberias, who live alongside the shores of the Galilee in mixed communities of Jewish Israelis of North African, Iraqi, Moroccan, Russian and Ashkenazi descent.

“Some Day” picks up on many of the same refrains from Zarhin’s films where parents need parenting and everyone is a bit broken, though yearning for connection. But in the midst of their daily hardship, there is poetry and love, sex and affection. It’s a magical setting where it is difficult not to fall in love with Zarhin’s characters.

The novel, which spans 14 years, from 1969 to 1983, revolves around Shlomi and Ella and their families. Even at 7 years old, these two are destined to be soul mates, but they aren’t headed for anything resembling normal happiness.

Shlomi’s life and that of his family are turned upside down at the novel’s opening, when Ella and her parents arrive in town having been resettled as refugees from the Holocaust. Within days of their arrival, Ella’s father dies, leaving her mother, Hanna, a widow whose sexual desires wreak havoc on Shlomi’s father and on other members of Shlomi’s family. The story plays out through the decades, as both Shlomi and Ella are forced to grow up quickly in order to compensate for the immaturity and emotional instability of their parents.

In the Zarhin world, food is a close second to sex as a central force in influencing relationships. Ruhama, Shlomi’s mother, finds a career as a home caterer. As a teenager, Shlomi, leaves Tiberias for Tel Aviv with his father, Robert (Ruhama’s estranged husband), to work at a Yemenite restaurant.

Shlomi is a wizard in the kitchen. “His quick hands moved as in a magic show, all his yearning burst onto the work counter, and the manager had no choice but to set the terms of his employment,” Zarhin writes. This Shlomi is reminiscent of another one, the teenage boy in Zarhin’s movie, “Bonjour Monsieur Shlomi,” who is also forced to grow up too quickly due to the immaturity of his parents and siblings, and who delights everyone with his baking.

The novel, which has been on the Israeli best-seller list since it was published in 2011, is just a bit too drawn out at times, though the ending, which shouldn’t be revealed in advance, works well.

In general, politics serves as a backdrop in this book. Wars affect the characters’ lives, but the political situation isn’t foremost in their discussions or thoughts.

The one exception is Shlomi’s aunt, Tehila, who becomes a Black Panther activist and then a Knesset member, as part of the group of Mizrachi Jews in the 1970s who sought more equality for Jews of Arab and North African origin.

“Maybe Tiberias is in a different country altogether,” one character tells Shlomi, “a country they don’t write about in Israeli papers; a hot, sweaty country where the air stands still and people fight to walk through it, one step and then another, like in a pool of sand.”

But in Zarhin, the people of Tiberias have found their bard. His vision and talent make it difficult for anyone who reads his books or sees his films not to consider Tiberias and the daily lives of its inhabitants part of Israel’s rich mosaic.

Jo-Ann Mort writes frequently about Israel for the Forward and other publications.