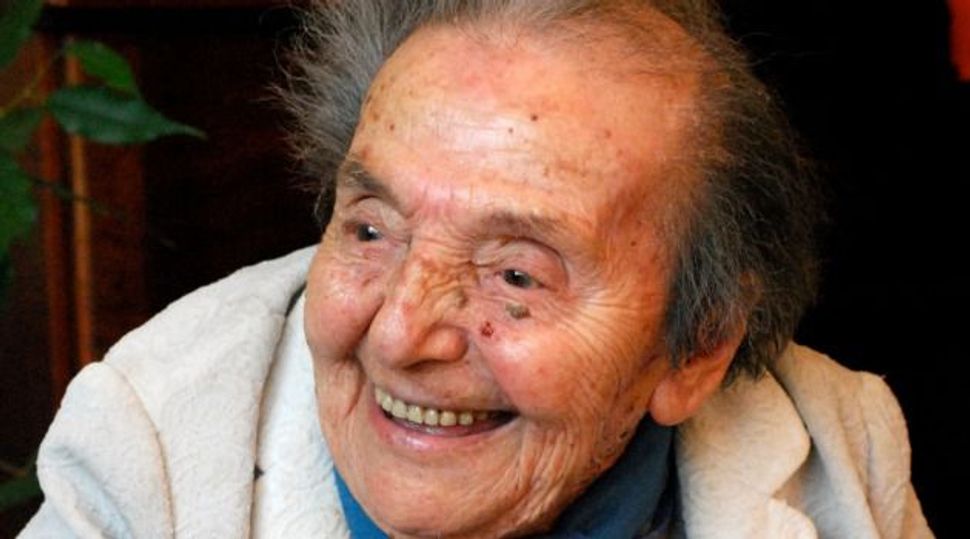 The Keys To Turning 110: Alice Herz-Sommer?s story has been told in such books as ??A Century of Wisdom: Lessons from the Life of Alice Herz-Sommer, the World?s Oldest Living Holocaust Survivor.? Image by Polly Hancock

Alice Herz-Sommer, the Czech pianist and Theresienstadt concentration camp survivor, celebrated her birthday on November 26th. A Londoner for three decades, Herz-Sommer had received the tribute of “Everything is a Present,” a 2009 film by the noted British documentarian Christopher Nupen who has also worked on films starring Daniel Barenboim, Itzhak Perlman, and Pinchas Zukerman, among others.

Yet “Everything is a Present,” which was released when Herz-Sommer was a mere lass of 105, was not merely about music. For Herz-Sommer’s message about joyous survival amidst the most gruesome historical and personal tragedies struck a chord in a wide public. Recent books which likewise lauded the subject, and rightly so, include “Alice’s Piano: The Life of Alice Herz-Sommer” by Melissa Mueller and Reinhard Piechocki, followed by “A Century of Wisdom: Lessons from the Life of Alice Herz-Sommer, the World’s Oldest Living Holocaust Survivor” by Caroline Stoessinger.

The first-mentioned solid study was originally published in German in 2006, and in the UK in 2007 as “A Garden of Eden in Hell: The Life of Alice Herz-Sommer” – subsequently revised and updated. The second is more an extended magazine article, with the “world’s oldest living” subtitle seeming in dubious taste, through no fault of Herz-Sommer’s. When dealing with some subjects, jockeying for giddy superlatives may appear unseemly, as in the 2012 controversy over Israel’s Miss Holocaust Survivor pageant. Yet despite any authorial pretensions and straining by others for unneeded superlatives, Herz-Sommer herself remained an unassumingly upbeat and life-affirming musician, which is one key reason to celebrate her.

“26 Reviews of Musical Events at Theresienstadt” a compelling 2011 publication, provides another, as well as evidence that Herz-Sommer was lucky even in her music critics. Not only were some musicians in concentration camps obliged to perform – she is listed in participating in over one hundred recitals during her imprisonment – but were also subjected to the judgments of music critics who published articles in camp-produced media. Herz-Sommer was not judged by some penny-a-line hack, but by the sensitive and insightful Silesian-born Austrian Jewish composer Viktor Ullmann, himself a fine pianist. In one 1944 review Ullmann, who would be murdered in Auschwitz later that year, called Herz-Sommer the “Freundin (friend or sweetheart) of Beethoven, Schumann, and Chopin, alluding to her as “this great, diminutive artist and justly admired pianist.”

Yet beyond her artistry, Herz-Sommer had the inner fortitude to transcend not merely a great historical tragedy, but devastating personal loss, when her mother and husband were likewise murdered in concentration camps. And in 2001 her son Raphael, born in 1937 and like her a Theresienstadt survivor, died of an an aortic aneurysm. Having grown up to be a noted cellist and teacher in Israel – where he studied with the great French cellist and kibbutznik Paul Tortelier – and the UK, Sommer once told BBC Radio that at Theresienstadt, his mother “did everything to hide all the atrocities from me, and to create a kind of normality.” Ullmann was right; Herz-Sommer is still the piano world’s sweetheart. To the general public, she has also become something more: the symbol of an indomitable human spirit.