The Most Graphic War Story Ever Told 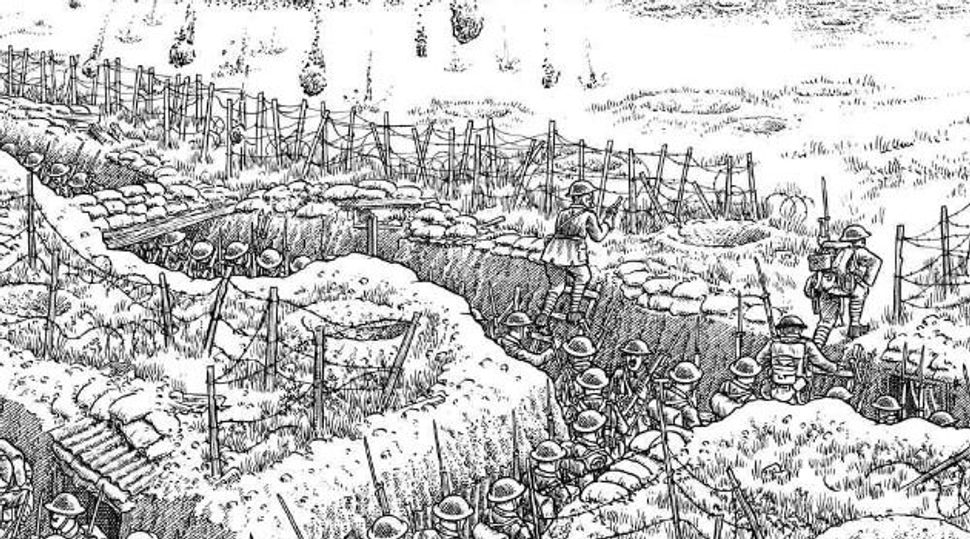 Not Very Quiet on the Western Front: Joe Sacco visualizes the bloodiest day in British military history in ?The Great War, July 1, 1916: The First Day of the Battle of the Somme.? Image by Joe Sacco Courtesy of W.W. Norton

Anyone with an interest in the state of Israel, its contradictions and compromises, and the sad history of the ongoing Israeli-Palestinian conflict, often distorted by both sides, should know who Joe Sacco is.

His first book “Palestine” started out as a series of self-contained comic books and was published in collected form and received the American Book Award in 1993. It chronicles his visits to Israel and the occupied territories in the early 1990s, casting him as a young idealistic tourist who aspires to be a professional comic book artist and journalist. In a series of short scenes, he bumbles around the region, from the Old City of Jerusalem to the crowded markets of Nablus to the refugee camps around Gaza City to the beaches of Tel Aviv, looking for worthy people to interview and learning, over and over again, that whatever his preexisting assumptions, the situation on the ground is always more complicated than he first thought.

In 2009, having risen from young punk to veteran war journalist, celebrated for his pioneering use of the comic book form to add detail and nuance to his reporting, he published a second book about the region, a virtuoso mix of personal narrative, oral history and historical research called “Footnotes in Gaza.” In this book, Sacco documented his experiences in Gaza during the height of the Second Intifada. He’s there to find out what he can uncover about a barely reported 1956 massacre by Israeli soldiers of 275 Palestinians in the town of Khan Younis on the Egyptian border. While there, he learns of another, similar slaughter in the nearby town of Rafah. Much of the text consists of Sacco’s present tense experiences travelling around Gaza with his fixer in search of survivors to interview. This allows a two-tiered narrative to develop: The daily terror of the 2002 conflict is juxtaposed against the memories of those who were involved firsthand in the events of 1956, including Palestinian mothers who lost their sons, men who managed to escape, children of the dead, aging fedayeen, and Israeli soldiers and officials. As the book progresses, the role of the past in creating the present emerges with heartbreaking inevitability.

What makes Sacco exceptional, and I’d argue, reliable as a journalist, is his anxious desire to recognize and acknowledge his own biases. Unapologetically leftist in his inclinations, he takes great care to notice the ways in which his desire to believe in the weak and the powerless, the historical losers, might distort the truth of the story he tells. He provides contextual information about the people he interviews, noting their emotional, economic and political circumstances, pointing out their underlying biases, and then allowing them to speak for themselves, leaving it up to the reader to decide for him or herself the extent to which their stories should be believed, thrusting their humanity onto the reader. Sacco is as skeptical of his own agenda as he is of those of his subjects. And by making himself a character in his story, he reminds the reader of his own subjectivity. Because the character Joe Sacco is an advocate for leftist ideas, the author Joe Sacco gains credibility as an objective observer, capable of sorting through the multiple, contradictory interpretations (including, ironically, his own) of the story he’s reporting.

His new book, “The Great War: July 1, 1916: The First Day of the Battle of the Somme,” shows off the visual element of Sacco’s work. Instead of using his usual postmodern storytelling techniques, he relies solely on his talent as a draftsman, dramatizing the events of the bloodiest day in the history of the British military — from General Douglas Haig’s anxious pacing outside his headquarters before the battle began, through the stockpiling of munitions and the marching of troops toward the front lines, packing them into the honeycomb trenches so tightly that they must sleep on their feet, to the unsuccessful bombing of the German defenses and the suicidal race across no-man’s-land to be slaughtered by German machine guns, to the final retreat and burial of the dead — in one 24-foot-long wordless image.

In the introduction to the booklet accompanying the drawing (which also contains a cogent essay about the battle by the acclaimed historian Adam Hochschild), Sacco explains that he used the Bayeux Tapestry, the 230-foot-long medieval embroidery depicting the Norman Conquests and the Battle of Hastings, as the model for “The Great War” and the influence of this work is obvious enough. Both are continuous images that ask the viewer to “read” them from left to right as they tell a gruesome story of war. But the Bayeux Tapestry sweeps years into a sustained, unspooling image, tracking the major events of the war it depicts in a series of overlapping panels that morph, montage-like, into each other. “The Great War” operates on different principles, more like an Altmanesque tracking shot that bobs and weaves and spins to take in the action transpiring within the confines of a circumscribed time and space. If its subject owes a debt to the Bayeux Tapestry, its aesthetic tactics have more in common with the celebrated Song-era Chinese scroll “Along the River During the Qingming Festival,” in which the viewer witnesses, through the artist’s fixed point of view, the sweeping panorama of the landscape, and time slides by in one continuous scene densely packed with realistic and detailed glimpses of the people of Bianjing going about their day.

“The Great War,” too, limits itself to a single day, and through its use of perspective, it leads the viewer through the events of the battle with a fluid inevitability. Using the thick outlines and crosshatchings of the cartoonist, Sacco fills the landscape with an encyclopedic amount of detail. The entirety of known information about the battle of the Somme seems to have made its way into the picture, including the assorted modes of transport, from horses to flatbed trucks to tractors to troop convoys, the various types of howitzers and machine guns, the uniforms of troops from a multitude of regiments, and of course the explosions, the trenches, the tangles of barbed wire, the stretchers and graves.

And if you look closely at the details, you’ll see that each of these soldiers is slightly different, each carries the weight of his own individual sorrow in his body, some maimed, some limping, some suddenly dead, all of them worthy of being remembered as more than statistics, more than cogs in the never-ending war machine. Which brings us back to Sacco’s work in Israel and Gaza, to the humane and humanistic theme that runs through everything he does. Regardless of the context, regardless of the politics, regardless of whose side you claim to be on, the misery of the losers must be respected and there’s no pride in winning when the price is this steep.

Joshua Furst is the author of “The Sabotage Café” and is a frequent contributor to the Forward.

The Most Graphic War Story Ever Told