‘Tis the Season For Holiday Synthesis 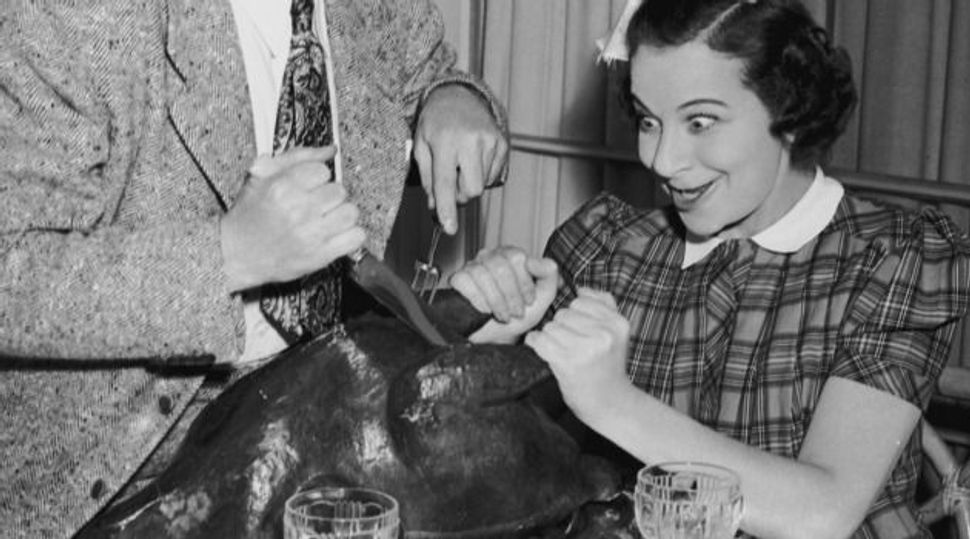 And She Herself Cut the Roast Beast: Fanny Brice, playing ?Baby Snooks,? digs into a seasonal meal. Image by Getty Images

Now that doughnuts filled with pumpkin crème and potato latkes festooned with cranberry sauce have been safely consumed, and all those recently purchased menurkeys, where “the candles meet the turkey,” are stowed away until the next time they are destined to put in an appearance, it is high time, I think, to take a moment to reflect on the broad cultural significance of the calendrical convergence of Thanksgiving and Hanukkah.

A media darling if ever there was one, the emergence of what rapidly became known as Thanksgivukkah was featured just about everywhere, from The Wall Street Journal to Chabad’s website. Over 35 million (!) “results” could be found on Google alone, suggesting that it wasn’t just food writers, interior designers, manufacturers or eagle-eyed journalists who seized on the event as a “once in a lifetime” phenomenon. Thanksgivukkah had America buzzing.

Why all the fuss? Future historians will undoubtedly come up with a set of well-reasoned explanations to account for the nation’s exuberant embrace of this celebratory moment. With the benefit of hindsight and the passage of time, they are likely to discern patterns of belief and behavior that we’re simply too close to see. In the meantime, I’d like to try my hand at offering up several provisional interpretations that set Thanksgivukkah’s popularity within a contemporary American context.

Why all the fuss? In a word (or two or three): family, food and ritual. This newfangled celebration brought together these three holiday pillars in ways that were pleasant, accessible and, above all, non-threatening. A domestic occasion rather than an ecclesiastical one, Thanksgivukkah took place at home. One could, of course, find any number of religious institutions that marked the holiday with a prayer service, but the main event was held around the family table where food was unquestionably the star attraction, the centerpiece of the day.

A testament to America’s bounty and its spirit of culinary improvisation, the bill of fare was sufficiently varied to accommodate every palate. With the exception of, say, oyster stuffing or cranberry sauce enriched by a dollop of sour cream, most items on the Thanksgiving menu could be adapted to satisfy the requirements of those who keep kosher or ascribe to a vegan diet. Much the same could be said of the Hanukkah menu: It, too, lent itself to adaptation, giving rise to fanciful creations such as ginger-allspice potato pancakes.

When it comes to rituals, both Thanksgiving and Hanukkah abound in them, to be sure, but, in virtually every instance, whether breaking away from the table to watch the football game or lighting the candles, they are pleasing rather than onerous, an informal matter of performance rather than a formal profession of faith. More strikingly still, the ritual rhythms of both holidays are not so much strictly mandated from above but are, increasingly, an expression of family idiosyncrasies. (I’m reminded here of the dramatic scene in Barry Levinson’s film, “Avalon,” where, owing to his late arrival, the family member usually honored with the privilege of carving the turkey was passed over in favor of someone else, a decision that resulted in a domestic dispute of the highest order.)

When you put all these ingredients together, you can begin to understand why Thanksgivukkah seized hold of the contemporary American imagination. A neutral occasion, it was sufficiently open-ended, fluid and what my father liked to call “noncontroversial” to appeal to the millions of blended families that now define America. Of a piece with the holiday greeting cards that give a voice to those who celebrate both Christmas and Hanukkah, Thanksgivukkah went further still, generating a festive meal — and on a Thursday, no less — not just a cheery salutation.

But wait, there’s even more: Thanksgivukkah is also the perfect expression of what historian Jonathan Sarna, in a celebrated 1998 essay in Jewish Social Studies called the “cult of synthesis.” An article of faith among American Jews ever since the 19th century as well as a form of special pleading, it proclaimed the “convergence of the two traditions” of Americanism and Judaism, holding out the very real possibility that the two “walked happily hand-in-hand.” “The Jew was completely merged in the American,” insisted the American Israelite in 1889, while still others, with equal fervor, pronounced George Washington the descendant of Moses, picking up where the biblical leader left off and sustaining his legacy. As Rabbi Emil G. Hirsch of Chicago would have it, the Jewish views of “liberty and law… are in creative concordance with the distinctive principles pillaring American civilization.”

To this list of “concordances” and “convergences,” whose expression was at once visual, rhetorical and even material, we can now add Thanksgivukkah — but with a twist. Earlier versions of the cult of synthesis were reverential, serious and dutiful, a reflection of a time in which American Jews felt somewhat skittish about their place in an America that regarded itself as Christian, through and through. This latest manifestation of the cult of synthesis is playful, fun and even irreverent, a reflection of a moment in time when American Jews, and the nation as a whole, are engaged in the project of reimaging themselves.

Wouldn’t it be lovely, then, if Thanksgivukkah came around more often?

‘Tis the Season For Holiday Synthesis