Your Days Are Numbered… and So Is Just About Everything Else 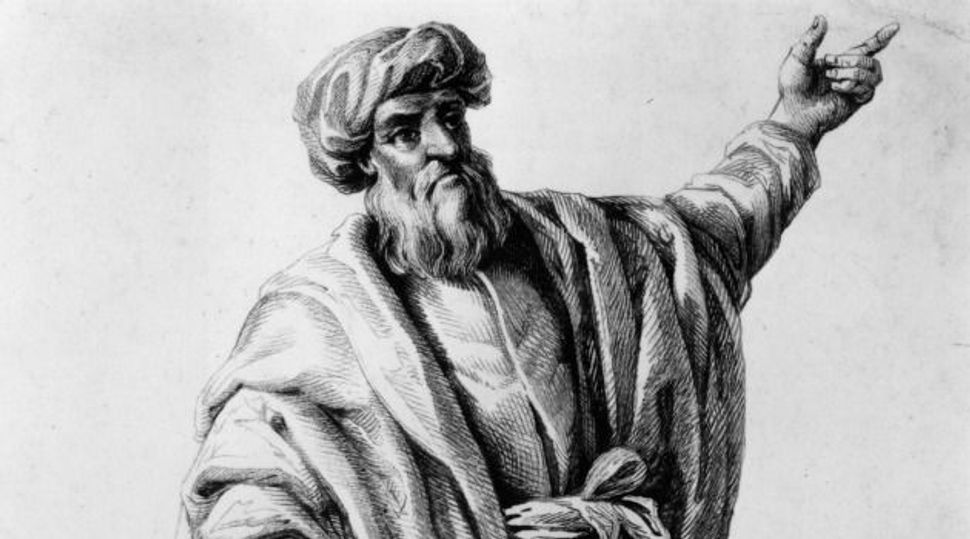 The Book of Numbering: Greek geometricians like Euclid knew that letters could be used to solve numerical problems. Image by Getty Images

Emily Koenders writes that she is working on a paper on gematria in rabbinic literature and wonders if I can help her locate the talmudic sources of three examples of it.

Gematria (pronounced with a hard “g”) is the rabbinic term for finding significance in the numerical value of the letters of Hebrew words. In Jewish tradition, each of the 22 letters of the Hebrew alphabet stands for a number — from alef to yod for the numbers from one to 10, from kaf to kuf for 20, 30, et cetera, up to 100, and resh, shin, and taf for 200, 300 and 400. Accordingly, every Hebrew word adds up to a sum, too.

The first of Ms. Koenders’s examples is a rabbinic gloss on the prediction in Jeremiah 9:10 of the Kingdom of Judah’s impending conquest by the Babylonians. We read there: “For the mountains will take up a weeping and a wailing… both the fowl of the heavens and the cattle are fled.” Adding up the letters of the word behemah, Hebrew for “cattle,” one arrives at 52 — which, according to the Talmud, is a prophecy of the 52 years that elapsed between the Babylonian destruction of the Temple in 586 B.C.E. and the return of the Babylonian exiles in 534 B.C.E. This assertion can be found in the tractate of Shabbat, 145b.

Ms. Koenders’s second example is a more playful one. Defending a tipsy indiscretion on the part of two of his sons at a dinner, the rabbinic sage Rabbi Hiyya is quoted by the tractate of Sanhedrin, 38a, as observing that, “When wine enters [the drinker], secrets depart [by being disclosed].” We can be sure this is so, Rabbi Hiyya explains, because the letters of yayin, “wine,” add up to 70, just as do the letters of sod, “secret.”

Finally, Ms. Koenders inquires where in the Talmud she can find the equation of the Hebrew word ayin, “eye” (whose numerical value is 130), with mamon, “money” (130, too, if one counts only its consonants), enabling the biblical verse “An eye for an eye” to be interpreted as calling for monetary indemnity for the infliction of physical injury, not for physical tit for tat. Here, alas, I must tell Ms. Koenders that not only is this gematria not talmudic, it is not even old. A rabbinically erudite acquaintance to whom I turned tells me that, as well-known as the ayin=mamon formula now is, it can be found no earlier than in a 20th century biblical commentary by Rabbi Chaim Ya’akov Layzer.

Perhaps I can offer Ms. Koenders consolation in the form of two other talmudic gematrias that I can think of. (I am sure there are many more of which I can’t.) One occurs in the tractate of Makot, 23b, where Rabbi Hamnuna points out that the numerical value of Torah is 611, two short of the 613 commandments that the Torah is said to contain, after which he proceeds to give an explanation of the missing two. The other is in the tractate of Berakhot, 8a. There, Rabbi Nachman bar Yitzhak states that there are no less than 903 different kinds of death, basing himself on the gematria of the word totsa’ot, “outcome,” in the verse in Psalms, “Our God is the God of salvation, and unto God the Lord belongs the outcome of death.”

One doesn’t have to be a trained etymologist to guess correctly that gematria is related to our word “geometry.” And yet at first glance this seems puzzling. “Geometry,” from the Greek geometria, “measuring of the earth,” is, as its name indicates, the branch of mathematics dealing with points, lines and shapes, not with numbers. How do we get from it to rabbinic gematria?

The answer is that although ancient Greek geometricians like Euclid indeed worked more with two-dimensional surfaces than with numbers, they realized perfectly well that the former could be used to represent numbers and solve numerical problems. This did not of course pertain to simple arithmetic. If an ancient Greek had to add, subtract, multiply or divide, he did it on his fingers or with an abacus. He would have resorted to geometric figures, however, if faced with an algebraic problem. Asked, for instance, “If 5 bushels of figs are selling for 38 drachmae, how much would it cost to buy 17 bushels,” he might have found the answer by drawing rectangle ABCD in which AB and CD measured 5 units of length and AC and BD 17 units; extending AB by 33 more units to point E; drawing EF parallel to AC and BD so that it was intersected at F by a line running through BC, and measuring EF. This was a geometric way of solving the equation 5/17=38/x.

The ancient rabbis were well aware of this use of geometry. It is to it that, in Pirkei Avot or “The Ethics of the Fathers,” Rabbi Eliezer Hisma was referring when he said, “Tekufot [calendrical reckoning] and gimatriya’ot [geometrical algebra] are side dishes to wisdom.” Gematria thus came to mean the algebraic solution of mathematical problems, and eventually, simple arithmetic and the calculation of the numerical values of Hebrew words. This is the sense in which it entered Jewish tradition, in which both it and the technique it designates are still widely encountered today.

Your Days Are Numbered… and So Is Just About Everything Else