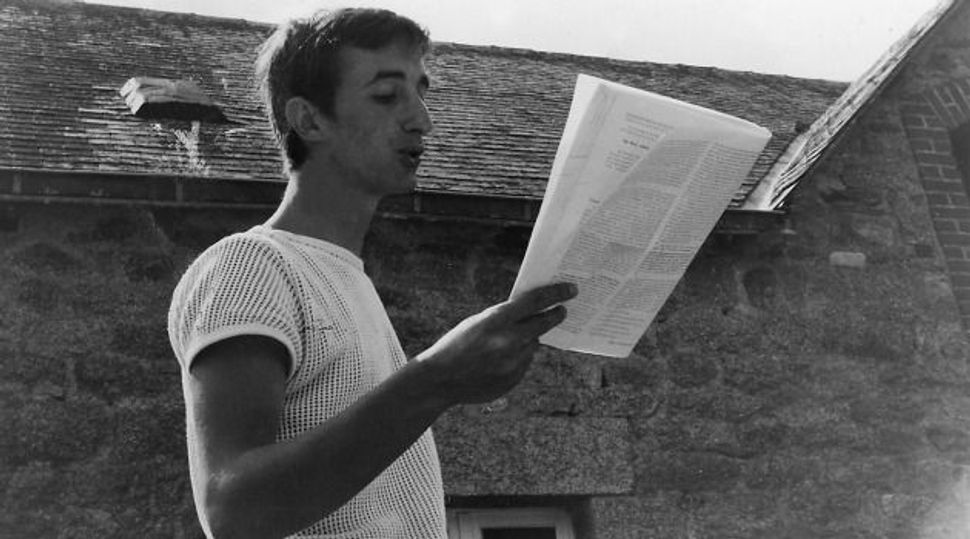 Some Exit: Following the Suez crisis of 1956, Benny Lévy (above) and his family fled Egypt for Belgium and then later moved to France. Image by Éditions Verdier

Ten years after his death, a French Jewish author hitherto celebrated chiefly for making philosopher Jean-Paul Sartre more sympathetic to Jews, is now earning attention for his own works. Benny Lévy, who died in 2003 at the age of 58, is being honored with the posthumous publication of his works, along with homages from students and colleagues, and an eloquent memoir, “À la vie” (“To Life”), written by his widow, Léo Lévy. Its title, echoing the traditional Hebrew toast l’chaim, is appropriate for a book which fullheartedly celebrates a man who during his lifetime frequently faced bitter controversy.

Best remembered for his stint from 1973 to 1980 as Sartre’s private secretary, Benny Lévy co-authored books of conversations with Sartre in which the elderly thinker expressed more sympathy with religious observance, particularly Judaism, than he ever had before. When Sartre was quoted as saying that the suffering of the Jews was the “most shattering of all sufferings,” some in his circle, including his longtime companion Simone de Beauvoir, reacted with furious denials and accusations of misrepresentation. Others close to Sartre, such as author- filmmaker Claude Lanzmann and philosopher André Gorz, made no such objections. To some, Benny Lévy remained an enigma, especially after he made aliyah in 1997 and thereafter focused on studying Talmud, mysticism and the works of Emmanuel Levinas, the French philosopher of Lithuanian Jewish ancestry. He would eventually found Jerusalem’s L’Institut d’études lévinassiennes.

“To Life” describes Benny Lévy’s early years as the son of an Egyptian Jewish family on Soliman Pasha Street in Cairo. As a boy given to temper tantrums, Benny Lévy was further traumatized by local anti-Semitism, which grew after the Suez Crisis of 1956. The following year, Benny Lévy and his parents fled Egypt, first to Belgium and later to France. In an early brush with Sartre’s work, he performed in a production of the play “The Condemned of Altona,” in which he was cast against type in the role of a Nazi torturer. Intellectually ambitious, Benny Lévy continued his studies in Paris.

At the École normale supérieure, a renowned university in Paris, Benny Lévy made contacts with such noted French Jewish thinkers as Jacques Derrida and Raymond Aron. By then, Benny Lévy had already met the young woman, from a Polish Jewish family, who would become his wife.

The young couple was passionately interested in leftist politics, and Benny Lévy’s fellow revolutionaries insisted he adopt a more generic French-sounding name for public pronouncements and activities, given the country’s long-standing anti-Semitism. He obeyed, using the alias Pierre Victor.

After the Israeli victory in the Six Day War in 1967, Léo Lévy noted wistfully that “forthright Jews were happy and shared a common pride, but we [as radicals] had forgotten how to be forthright and the Jew within us had to take a back seat.” Ironically, Sartre, much criticized for his study “Anti-Semite and Jew,” published in 1946, which defines Jews essentially by those who hate them, would bring Benny Lévy to a more forthright acceptance and appreciation of his own heritage. As Benny Lévy told his friend, the philosopher Alain Finkielkraut, in a book of conversations published in 2006: “Sartre made me rediscover a taste for my own [real] name and first launched me on a return to Scripture.” This began in 1970, after Benny Lévy’s fellow leftist Jewish student Alain Geismar, later a noted French politician, introduced Benny Lévy to Sartre.

A genuine friendship developed between Lévy and Sartre. As Sartre explained in a conversation with Benny Lévy published in the newspaper Libération in 1977: “What immediately pleased me was that you seemed more intelligent than most of the political people I’d met until then… and much freer. You agreed to discuss unpolitical subjects, the kind of conversations I enjoyed having with women. You were, still and all, a chap with female qualities.”

In exchange, as Léo Lévy puts it, Benny Lévy showed Sartre how “Jewish Messianism could give new power and momentum to revolutionary thought.” The two friends could still disagree, as they did in 1972 after the massacre of 11 members of the Israeli Olympic team by the Palestinian group Black September, which horrified Benny Lévy. Sartre, by contrast, felt that “terrorism is justified when no other means of struggle exists.” By the mid-1970s, Léo and Benny Lévy were living in a leftist commune where they had to confront the fact that Françoise, one of their co-tenants, was the daughter of Louis Darquier de Pellepoix, a notorious anti-Semite and Nazi collaborator during the wartime German occupation of France, when he served as commissioner of Jewish affairs under the Vichy regime. Sentenced to death after the war, Darquier fled to Franco’s Spain, where he was protected by that country’s fascist dictatorship. This bitter remembrance of modern history close to home may have further impelled Benny Lévy to begin studying Jewish mysticism and Talmud soon afterwards.

When Sartre proposed a trip to Israel in 1977, after Egyptian President Anwar Sadat became the first Arab leader to visit Israel, Benny Lévy eagerly accepted. On the trip, where they were accompanied by Sartre’s lover and his adopted daughter Arlette Elkaïm-Sartre, Benny Lévy put on tefillin for the first time to pray at the Western Wall. Benny Lévy’s later years in Israel were often stressful, partly due to France’s official reluctance to support French-language Jewish cultural studies in Israel. Yet his was a productive and satisfying life. Benny Lévy demurred when journalists simplistically summarized his trajectory as “from Mao to Moses,” arguing that he started with Jewish tradition and after his years as a secular radical, rediscovered his identity; thus his path would be more accurately described as “from Moses to Mao to Moses again.” Léo Lévy summed up their sometimes-tumultuous experience best: “We realized that when Jewish life isn’t lived as a misfortune or hardship but as a fulfillment, other people cannot always tolerate that.”