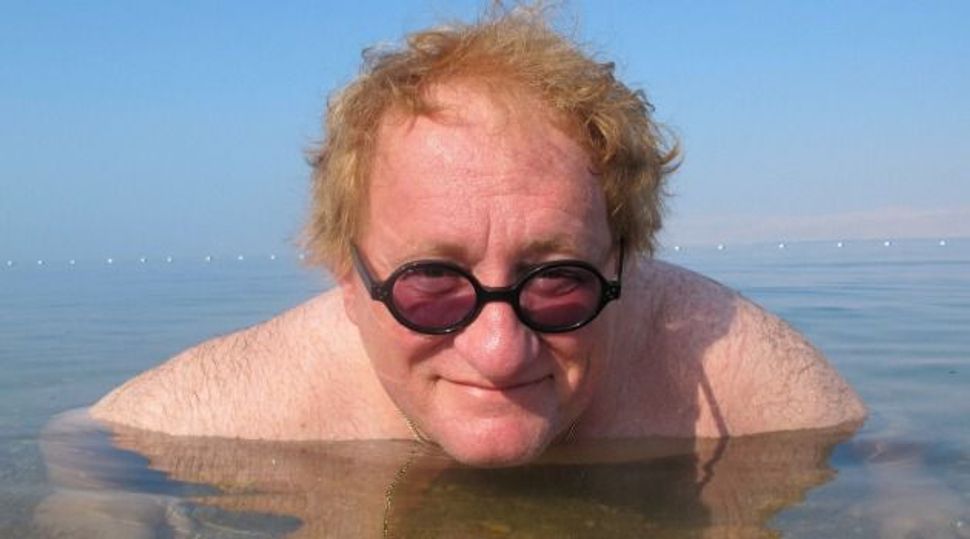 Bathing For Peace: Tuvia Tenenbom takes the waters in the Dead Sea. Image by Isi Tenenbom

Years ago, Germans, quite many of them, in fact, would fly from their homeland to the Dead Sea in Israel in order to bathe in the world-famous salty waters. Some did it for recreation, others for fitness, and still others to cure themselves of psoriasis.

All was fine and dandy until one day the owner of a big German travel agency who made her living from the government-sponsored health insurance that paid for her flying clients, started having second thoughts. Raised to be a do-gooder German, she felt it was morally wrong for Israeli Jews to make profits off Germans. She thought about it through and through, until a really great idea came to her mind: Replace the Jews with non-Jews. And so, before long she contacted a Jordanian man she knew and, so goes the story, said thusly unto him: If you build a hotel on the Jordanian side of the Dead Sea, I will divert the tourists from Israel to Jordan.

Within a short time, the man, who happened to be a smart businessman, decided to indeed build the hotel. He called it the Dead Sea Hotel and today I, the best German there is, am staying here.

But, I hate politics and love medicines, and on my second morning in the area I made it my business to meet Dr. Zuhair Bisharat, the head dermatologist of the hotel, in order to discuss how a sea can cure a disease.

“Germans are the best,” he told me as I sat in his office, his eyes shining like those of a child.

In what way are they the best? I asked him.

“Science, punctuality and they also are the strongest in economy.”

Hailing from Amman, Dr. Bisharat is a dermatologist with a specialty in psoriasis, who honed his craft in Germany. He speaks thusly unto me:

“We are 425 meters below sea level and this means the UVA rays, the longer ones, reach the area and they penetrate the skin, while the UVB rays, the shorter ones that are in many places on earth, are damaging our skin. There is a permanent haze around the Dead Sea and it absorbs some of the UVB rays, allowing the UVA to help us. Proliferation of skin happens normally every 28 days, meaning that the skin changes every 28 days, but with psoriasis patients it changes every four days, but the UVA stops this process.”

I didn’t know any of this, so I told the good doctor to go on.

“Another thing,” he said. “The air here has more oxygen that anywhere in the world, because the atmospheric pressure here is much higher.”

Does this area, the Dead Sea area, also make you smarter? (I can’t believe I came up with such a stupid question, but I did.)

“Yes, yes,” he said. “There is more bromide here than anywhere else and this makes you relaxed. So you are more relaxed here, the oxygen makes you smarter, and this happens only on the Dead Sea.”

Is there any difference between the Israeli side and the Jordanian side of the Dead Sea?

Does this also mean that the Jordanians are smarter?

“No,” he said. But he added that there are people who are smarter than the rest of us anyway. Who? I asked. “The Germans,” he said.

Bisharat recommends psoriasis patients to stay in this area “an average of three weeks. On average this will cure the disease for 6.2 months.”

I wanted to know if, as a doctor, he had spent time on the other side of the Dead Sea, to see the differences for himself and maybe chat with psoriasis patients who go there. He said that he had not. Yes, he flew thousands of miles across the Mediterranean Sea to study in Germany, but he never crossed the few feet distance into Israel.

“I’ll never go there unless there is peace between the Israelis and the Palestinians,” he said.

Imagine that a Jewish settler sneaks into your practice, right here, and says to you: “Shalom, please treat my bad skin. Nobody likes me, no one wants to look at me, and my own wife won’t sleep with me. Please, please treat me. I’ll pay you anything you want.” Will you treat him?

Will you give him coffee when you discuss these lofty issues with him?

“In my office there’s no coffee,” he said.

This doesn’t mean that he doesn’t like Jews, of course. In fact, he told me, he has some good Jewish friends.

In Germany and in Austria, he said and then he got up. He had an appointment, he told me, and he couldn’t be late. Being on time, he said, is a quality he learned from the Germans, and he’s a good student.

As it turns out, I am a good student too. I am in Jordan these days joining a peace mission sponsored and paid for by a German foundation. Brilliantly, this foundation had assembled here Arabs and Jews who both believe that Israel is on the wrong side of justice. Don’t ask me how such a gathering is going to contribute anything to peace, but at least the do-gooder Germans are still bathing on this side of the sea. Jews, by the way, are not allowed to leave the grounds of the hotel. Don’t ask me to explain this to you, as this is too complicated and only Jordanian and German peace lovers understand such brainy complexities. The only thing I can tell you is this: I, Tobi the German, do bathe in the sea and I feel very, very peaceful.

Tuvia Tenenbom is the author of “I Sleep in Hitler’s Room.” He is currently working on his follow-up book, “Alone Among Jews,” which he is researching in Israel from which he filed this report.