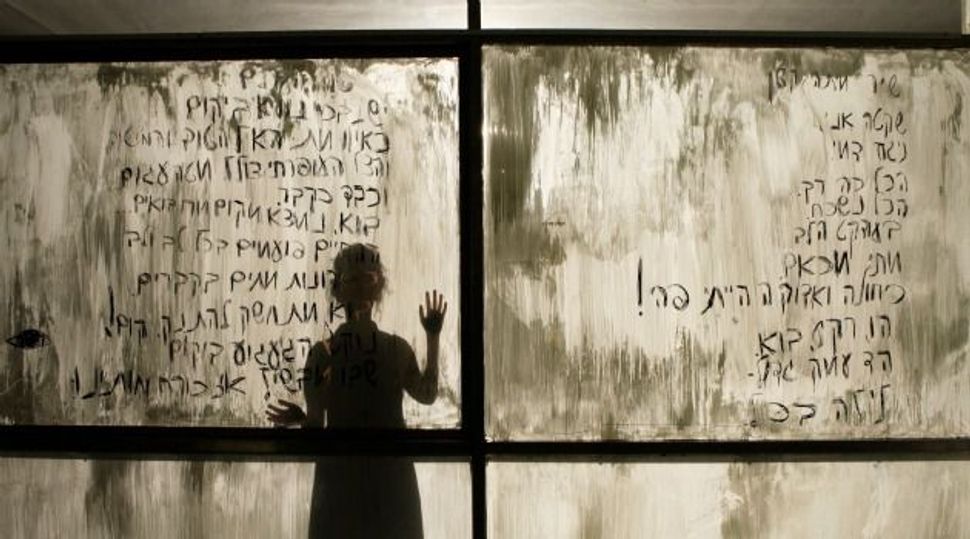 Windows to the World: Ofri Cnaani?s installation stretches across six large windows. Image by Courtesy of National Library of Israel

New York-based Israeli artist, Ofri Cnaani, has been having quite a year. One of her live video installations was screened as part of “The Met Reframed” artist residency series at the Metropolitan Museum of Art in March. A site-specific video installation titled “Moon Guardians” was displayed in Chelsea.

Recently, Cnaani arrived in Tel Aviv, to create a video installation at the National Library of Israel, which is celebrating its 120th anniversary. Cnaani is the second of 12 artists who have been invited to participate in a project, titled simply “12 Artists.” The project’s overseer is Yigal Zalmona, a former curator at the Israel Museum and the author of the recently published book “A Century of Israeli Art.”

Each of the 12 artists or performers has been asked to select an item from the library’s extensive collections and to use it to create or perform a work within the library walls. Cnaani has chosen to work with texts by the German writer, Else Lasker-Schüler.

Born in 1869, Lasker-Schüler was a fascinating and by all accounts eccentric character, who wrote poetry, prose and drama and was considered the leading female exponent of German expressionismat that time. She also drew and painted, occasionally illustrating her books and designing the covers.

In Berlin, Lasker-Schüler dressed extravagantly and exhibited a general disregard for social norms. She adopted a persona she referred to as Prince Jussuf of Thebes, who she represented as an exotic figure in her drawings. In 1933 she was awarded the Kleist Prize, then considered the most important literary prize of the Weimar Republic. But, by this point, Lasker-Schüler was considered something of an oddity in the cultural sphere and salons of the day. Mourning the death of her son and facing mistreatment by the Nazis, Lasker-Schüler left for Switzerland, and then made her way to Palestine in 1937.

Lasker-Schüler fared poorly in Jerusalem. Her liberal thinking and outlandish garb brought her unwelcome attention. Many of those who knew her during this time remarked on how they would see her in cafes, always alone, an impoverished, haunted figure.

Cnaani’s installation is titled “Sfar,” a Hebrew word that translates roughly as “a space of transition.” The video lasts approximately an hour; it is a low-key work with no specific beginning or end, and it stretches across six large windows of the library building. Cnaani has whitewashed the windows, using the finished surface as a kind of canvas, which can be viewed within the building, but also outside by passersby. “Sfar” was constructed as an installation meant for nighttime viewing. The video projects the silhouetted figure of Cnaani as she moves from one window to the next writing, scratching, erasing and occasionally drawing. Six of Lasker-Schüler’s short poems are written in a Hebrew translation on the windows.

“I had in mind to create a kind of life cycle. All the poems are dealing with creation and motherhood or life and death,” Cnaani told the Forward.

Graham Lawson is a writer based in Tel Aviv.