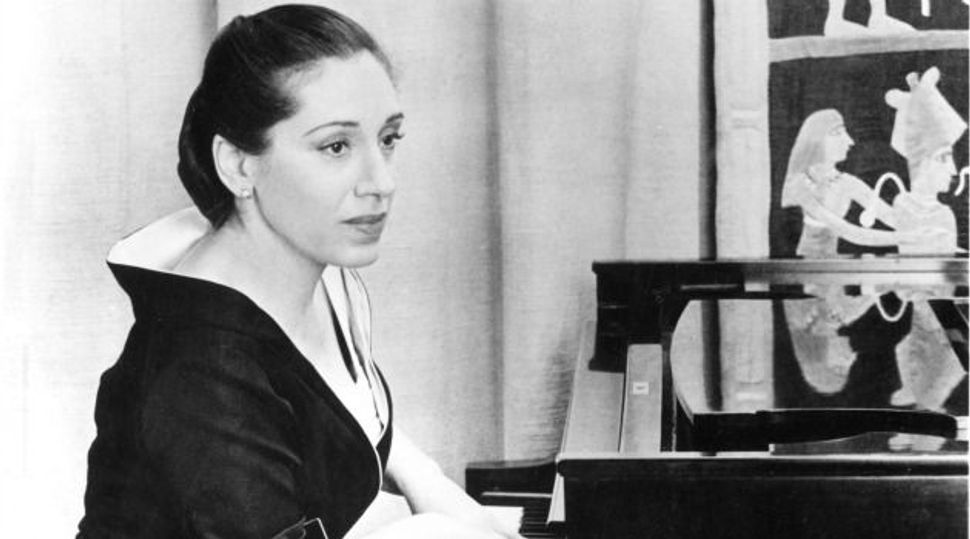 Intellectual Virtuoso: Pianist Rosalyn Tureck was fascinated by the fractals of Benoit Mandelbrot and she socialized with Nobel Prize winning scientists. Image by Video Artists International

December 14 marks the centenary of the American pianist Rosalyn Tureck. The legacy of Tureck, who died in 2003, is being commemorated with CD releases and a recital dedicated to her at New York’s 92nd Street Y by her student, guitarist Sharon Isbin. Critic Harold Schonberg called Tureck the “high priestess” of Johann Sebastian Bach performance. Tureck was naturally an exalted interpreter, a form of kohenet of Bach. Her grandfather was a cantor from Kiev who on High Holy Days toured in a coach drawn by eight white horses, according to family legend.

Born in Chicago, Tureck was encouraged by her parents to study the piano as part of a more ambitious intellectual program. At age ten, Tureck was taken by her piano instructor Sophia Brilliant-Liven to a Chicago concert by Léon Theremin, the Russian inventor who devised the theremin, a pioneering electronic musical instrument performed by Clara Rockmore (born Clara Reisenberg to a Lithuanian Jewish family). The newfangled instrument fascinated Tureck. Later describing the sound of the theremin as “much more abstract than what you hear on most keyboard electronic instruments,” Tureck was also drawn to its eerily mystical air. At the Juilliard School of Music, which she entered at age sixteen, Tureck won a scholarship to study electronic instruments with Theremin, and her debut at Carnegie Hall the following year would be on the theremin, not the piano.

This early interest in research and invention would remain a distinctive part of Tureck’s approach to music. Few pianists grappled with the theory, form, and structure of Bach’s musical ideas in performance the way Tureck did. Sometimes this could result in unusually deliberate, emphatic phrasing, as if the pianist were trying to drive certain notes through listeners’ skulls directly into their brains. More often, a lively conviction radiated from the renditions of Tureck.

Much later, Tureck would tell an interviewer, Alan Ampolsk, that she was drawn to friendships with scientists, most of them Jewish emigres fleeting Fascist Europe who found refuge in the New York academic world. In her early twenties, after a recital at Columbia University’s McMillan Theater, Tureck was invited to the home of the Austrian Jewish biophysicist Selig Hecht (1892–1947), a Columbia professor. At Hecht’s weekly dinner parties, Tureck met and schmoozed with scientists such as the Galician-born Nobel Prizewinning physicist Isidor Isaac Rabi (1898–1988) who, apart from sharing insights with Tureck about nuclear magnetic resonance, also taught her to play the musical comb.

Among Tureck’s circle was another Nobel laureate, Otto Loewi (1873–1961) a German Jewish pharmacologist known as the Father of Neuroscience; also Ernest Nagel (1901-1985), a philosopher of science of Slovak Jewish origin. At social gatherings, Tureck would lecture informally about the science involved in piano playing, such as how sound is made by the instrument, and would later entrance such high-level thinkers as philosopher Isaiah Berlin, physicist J. Robert Oppenheimer, and mathematician Benoît Mandelbrot, the founder of fractal geometry.

Mandelbrot’s fractals would so intrigue Tureck that she drafted a letter to the editor, destined to remain unpublished, in response to a 1990 article by Taiwanese mathematicians on the fractal geometry of music which was published in “Proceedings of the National Academy of Science.” Tureck sternly noted: “This is not to say that the possibility of analysis of music in terms of Mandelbrot’s theories is impossible. However, so far the giant strides and subjective assumptions of this paper are utterly invalid… This has nothing to do with Johann Sebastian Bach’s processes of thought and composition whatever, and the imposition of the authors’ is astounding.”

Ideas counted for Tureck, who, as Sabine Feisst’s “Schoenberg’s New World: The American Years” notes, paid for lessons in California with the exiled German Jewish composer Arnold Schoenberg in August and September of 1949, offering the then-high price of “between 100 and 200 dollars,” or several times the price Schoenberg charged other students. Feisst concluded that Tureck “may have been among Schoenberg’s most affluent later students,” or perhaps she was simply among the most generous. She certainly admired Schoenberg, writing in 1949 that she planned to record his Piano Pieces, op. 11 and 19, although this plan was unfortunately never realized. Tureck did avidly play other new music by such composers as William Schuman, Aaron Copland, and David Diamond, as surviving live recordings prove.

Throughout, Tureck kept in mind the structural essence of music, telling Ampolsk: “I start by working on form. When you’re thinking about form, I feel you’re at the core of the matter, whatever your discipline may be. That’s where the center of my being always is. It is at the center of my playing. I’ve always been expressing conceptions all my life, but of course audiences haven’t the slightest clue about that approach because nobody goes to a concert to learn about concepts.”

The abstract, essentially lofty quality of Bach’s music, not bound to a single instrument, suited Tureck’s own individual penchant for translating theory into manual expression, and her eventual near-exclusive focus on Bach was a natural development for her, in no way limiting. Just as she eliminated composers from her recitals when they proved less fascinating than Bach, Tureck could also be highly discriminating with friends, warming to even such a difficult personality as the American poet Elizabeth Bishop; Tureck charmingly recounts their friendship in “Remembering Elizabeth Bishop” (University of Massachusetts Press, 1996). Tureck was less drawn to the conductor Raymond Leppard, who in his “Raymond Leppard on Music” (1993) complains that Tureck was “not terribly agreeable” and “rather…full of herself.”

About other musicians, her opposition could be even more vehement. The Canadian pianist Glenn Gould praised Tureck for “playing of such uprightness, to put it in the moral sphere. There was such a sense of repose that had nothing to do with languor, but rather with moral rectitude in the liturgical sense.” Yet in 1999, Tureck told the music critic Michael Church that Gould was “talented and clever, but his idiosyncrasies were the result of a desperate desire to be noticed. I can’t approve… Idiosyncratic playing has nothing to do with art.” Tureck was even more outspoken with her friend Jenna Orkin, who recalled in “Music and Vision”: “Everything about [Tureck] was grand, even her pettiness. She didn’t bother to be bitchy about ordinary people. She saved her bitchiness for Glenn Gould and then she let it rip. When he died at fifty of a cerebral hemorrhage she said, ‘Not surprising considering how tightly he played.’ Guiltily I thought she had a point although I also thought she might have exercised some hypocrisy and let his dust settle before saying so.”

The dust had not settled in 2003, right after Tureck’s demise, when an internet music list caught fire with furious rejoinders after a commenter joked that after Tureck’s death, “the average worldwide tempo of Bach keyboard performances just increased by at least 10%.” Ten years on, as if following the poet Philip Larkin’s line, “What will survive of us is love,” tributes rather than brickbats are directed at Tureck in time for her centenary, from devotees at the Tureck Bach Research Institute and entrants to the triennial Tureck International Bach Competition for Young Pianists.