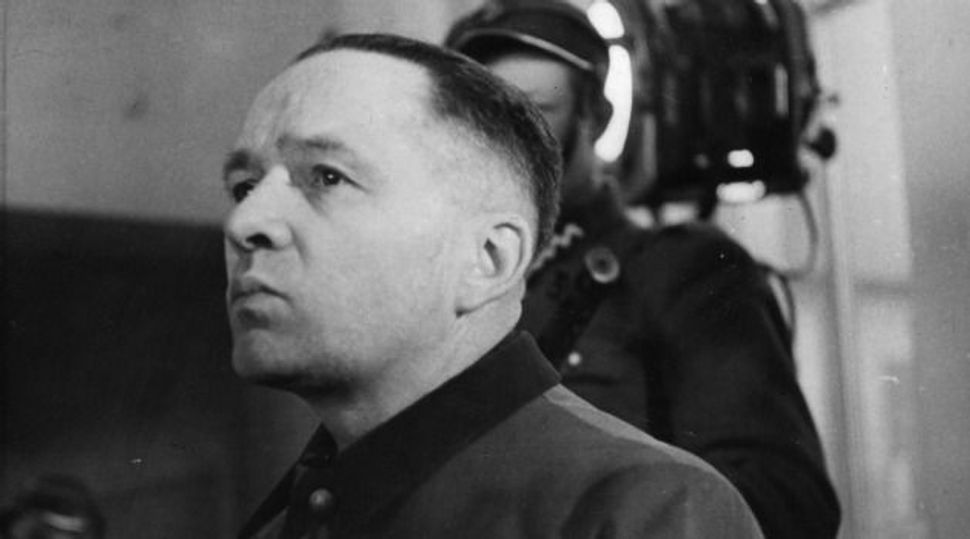 Following Orders: In 1941, Rodolf Höss was approached by Heinrich Himmler who asked him to build and run a new concentration camp called Auschwitz. Image by Getty Images

Hanns and Rudolf: The True Story of the German Jew Who Tracked Down and Caught the Kommandant of Auschwitz
by Thomas Harding
Simon & Schuster, 369 Pages, $26

At the end of 2006, journalist Thomas Harding attended the funeral of his great-uncle, Hanns Alexander, in London. After the recital of the Kaddish, two of Hanns’s nephews gave a eulogy that traced their uncle’s life, from his upbringing in Berlin to his family’s flight from Nazi Germany to England, and then to his war effort with the British Army against his native country. Much of this was known to the congregation.

However, Harding was jolted by one detail that had formerly never been aired: In 1945 Hanns had changed from soldier to Nazi hunter and was responsible for tracking down the Kommandant of Auschwitz, Rudolf Höss. His interest thoroughly piqued, Harding began investigating and the result is the meticulously researched and rivetingly reported “Hanns and Rudolf.”

Throughout the book, Harding refers to both men by their first names. In doing so, he brings the reader closer to his subjects. Harding alternates his subjects for each chapter, beginning first with Rudolf’s origins, then switching to those of Hanns in Chapter 2, and so on. Such a structure allows the reader to view the differences between the two men — Catholic and Jew, persecutor and persecuted, vanquished and vanquisher — and affords Harding enough room to flesh each of them out into full-bodied beings.

Harding’s early chapters skillfully set scenes for what will ensue. After a lonely childhood Rudolf signs up to fight in World War I, where he serves on the Mesopotamian frontlines. He shoots his first man and realizes he can kill quickly and efficiently in the heat of battle. Commended and promoted, he ignores the armistice, joins the Freikorps and takes part in massacring Bolsheviks in Latvia. Such slaughtering seems to have little effect on him. However, when he is noticed by Heinrich Himmler and tasked with supervising a newly established political prisoner camp in Dachau, he is appalled by the brutal corporal punishment meted out by sadistic guards. Harding excels at pinpointing these contradictions but leaves the reader to extrapolate the conclusions.

Hanns’s beginnings are calmer and less gripping, partly due to the fact that he was born in 1917, 16 years after Rudolf, and thus missed out on war and the subsequent political mayhem. But when Hitler becomes chancellor and the Nazi stranglehold tightens, Hanns’s affluent Jewish family feels the pressure and fears the worst. Suddenly his father, an eminent doctor, loses patients and income; Marlene Dietrich, Albert Einstein and Richard Strauss are no longer at their dinner table or parties.

Harding’s account of the Jewish boycott and Hanns’s escape out of Germany, aged 19, is laced with tension — a feat that is all the more remarkable since we know exactly what follows in both instances. Hanns makes a new life for himself in Britain. His mother stays behind in Berlin to try to sell the family practice — just as the Gestapo is increasing its roundups. We read on, anxious to discover if she can get out in time.

Harding’s two separate backstories are deeply engrossing. While we look forward to the moment when Hanns and Rudolf finally meet up, not once do we wish Harding would cut to the chase. What he does do halfway through, though, is turn to the pivotal moments in each man’s life. For Rudolf it arrives in the summer of 1941 when he is approached by Himmler again, this time to build and run a new concentration camp called Auschwitz, “a site of mass annihilations.” The Final Solution is set in motion and Rudolf devises and streamlines the most effective mass killing machine in human history. The man who was previously squeamish at witnessing corporal punishment is very soon inured to it: able to stand at the peephole to the gas chambers, sanction arbitrary killings and watch Sonderkommando units shoveling corpses into furnaces, and then go home to his wife and children in their luxury villa near the crematorium.

The two chapters devoted to Auschwitz are, inevitably, horrific, but Harding deserves praise for maintaining his dispassionate stance and cool, lucid prose. Harding employs a similar authorial detachment when describing Hanns’s turning point. It is Hanns who is enraged, not Harding, when back on German soil and confronted with the crimes against humanity at Belsen. The sobering, visceral details are offset by a touching story in which Hanns defies the odds by reuniting a lost mother and daughter. He joins the War Crimes Investigation Team as an interpreter but later decides he needs a more active role. With no detective training but armed with a pistol, a set of handcuffs and a list of names and last-known addresses, Hanns trawls the country for Nazi war criminals — specifically Kommandant Höss.

Like “Selling Hitler,” Robert Harris’s 1986 book about the quest to authenticate Hitler’s diaries, Harding’s book is factual but reads like an edge-of-the-seat thriller. Hanns’s desperate cat-and-mouse chase with its dead ends, cold trails and slippery informants is nothing short of exhilarating. When he snares his quarry there is further unfinished business at the Nuremberg Trials, followed by a final sentencing at a court in Poland. Harding catalogs the sensationalism of the case (The New York Times reported at the time that Höss was “probably the greatest individual killer in the history of the world”) and its aftermath, then gives us one last surprise in his postscript.

Along with chronicling a calamitous history, Harding sets up and grapples with a range of complex moral questions concerning the banality of evil: How does a man become a mass murderer? Is revenge ever justified? Should we also apportion blame to family and friends of killers? And does Rudolf’s plea of “I had been given an order, I had to obey it” warrant a mitigation of punishment?

Before closing the book, it pays to cast a look over Harding’s research sources. We expect the extensive bibliography and archival documents; but more impressive is Harding’s list of interviewees, including Rudolf’s second daughter Brigitte (whom he spent three years tracking down and persuading to talk), Belsen survivors, the American prosecutor at the Nuremberg Trials and the Polish prisoner who cut Rudolf’s hair once a week with trembling hands.

At the end of “The Periodic Table,” Primo Levi tells us that he forgives his enemies but only those who show repentance. He that does not repent will remain an enemy, and “it is our duty to judge him, not to forgive him.” Harding presents all his expertly pieced-together facts and invites us to judge Hanns’s enemy for ourselves. Most of us will share Hanns’s vitriol, perhaps even his sense of betrayal if we too are German. We will also applaud Harding’s clear-eyed narration and objectivity — that and his talent to produce a book that fascinates and disturbs in equal measure.