How the Other Half of America Still Lives 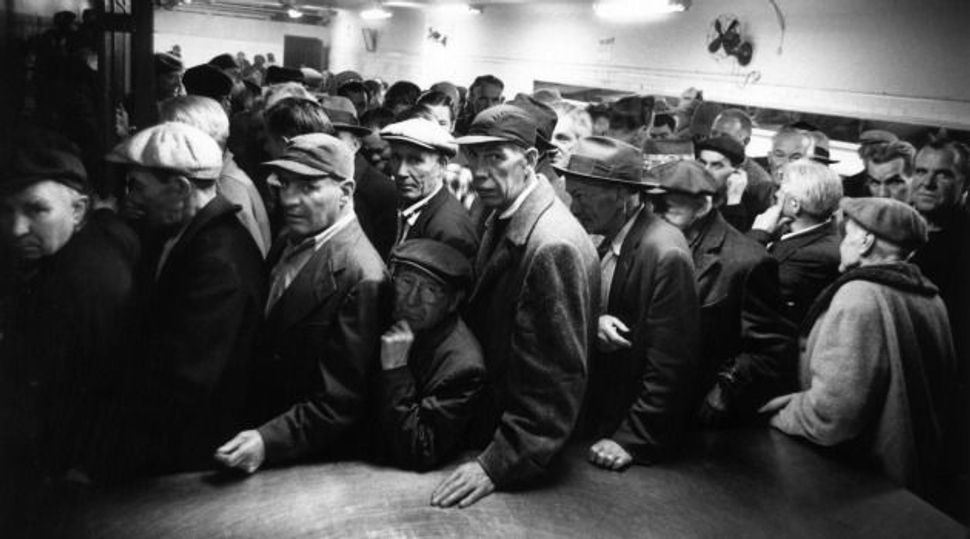 The Way Things Were (and Are): In Michael Harrington?s day, the official poverty rate was 19%. In September of this year, it was 15%. Image by William Lovelace/Getty Images

The American Way of Poverty: How the Other Half Still Lives
By Sasha Abramsky
Nation Books, $25, 368 pages

In 1962, Michael Harrington, a freelance journalist, published a book that hit the American public like a slap in the face. In a prosperous time, “The Other America: Poverty in the United States” described the tens of millions of poor Americans “maimed in body and spirit” — the desperate agricultural workers, malnourished seniors, struggling blacks and squalid alcoholics. “The Other America” punctured the mood of postwar triumphalism, alerting the most affluent society in the world to the hidden, or, as Harrington put it, “segregated” poverty in its midst.

It’s unclear whether President Kennedy actually read the book or read about it. Either way, it is fair to say that “The Other America” prompted Kennedy to turn his attention to the issue of poverty. After the assassination, Lyndon Johnson initiated the “War on Poverty,” which created Medicare, Medicaid and food stamps and expanded Social Security — programs that Harrington, broadly speaking, had put forward.

In Harrington’s day, the official poverty rate was nineteen percent — about 37 million Americans. (Harrington believed that it was more like 40 to 50 million.) The War on Poverty, however flawed, helped reduce the rate to around 11% by 1973. Thus it is not too much of a stretch to describe “The Other America” as a book that changed the nation.

But the change didn’t stick. Due to the Great Recession, falling wages and a growing disdain for the welfare state, the poverty rate is creeping up again — according to the Census Bureau, it was 15% in September of this year. And when you consider the ludicrous income threshold — $23,492 per year for a family of 4 or $11,720 for an individual — the percentage of Americans living in deprivation has to be much higher.

This troubling situation was the impetus for Sasha Abramsky, another journalist, to revisit Harrington’s territory fifty years later.

Abramsky has the leftie bonafides for the project. Raised in England, he learned about socialist politics from his grandfather Chimen Abramsky, an estimable historian and Jewish antiquities expert. The younger Abramsky has contributed to The Nation, Mother Jones, and The American Prospect; currently he is a fellow at Demos, a liberal think tank.

Abramsky spent much of 2011 traveling the nation, chronicling “the faces and voices of economic hardship in America.” The result is “The American Way of Poverty: How the Other Half Still Lives.”

It is depressing to note the similarities to Harrington’s day. Poverty is still entrenched in places like Appalachia and Mississippi. African-Americans are still more vulnerable to economic downturns than whites. Poor people are still more likely to get sick and less likely to get a decent education.

The differences are depressing as well — most notably the rise of the working poor. As wages fall and the cost of health care rises, it has become much harder for millions of employed Americans to get by. Recent disasters, like Hurricane Katrina and the housing market crash, have worsened their plight.

Abramsky provides striking individual pictures from his travels. Two disturbing examples come from Hawaii’s Big Island, where families build hovels on the edge of the rainforest. One couple lives with their 3-year-old son “in a home without a toilet, without running water, without electricity.” Both parents have jobs at a country club.

Nearby, an Air Force veteran and his wife are supporting their daughter and son-in-law and their four children on Social Security checks and food stamps. At the end of the month, when money gets tight, the family faces the common dilemma of “heat or eat” — whether to buy gas for the generator or food for the family.

Another disturbing story comes out of California’s Central Valley. When Megan Roberts’ husband, a truck mechanic, got a $1-an-hour raise, the family was no longer eligible for Medicare. Roberts suffered a ruptured appendix, which put the family almost $100,000 in debt. The Roberts were forced to declare bankruptcy. Then, at the age of 31, Megan was diagnosed with pancreatic cancer. By this time the family had health care, and the treatment was successful. But even with coverage, the Roberts were again left with six figures of debt.

“The American Way of Poverty” is a sobering look at the deepening economic insecurity faced by some fifty million of Americans. But Abramsky has an even more ambitious goal: to present “a roadmap to change, a blueprint for a new War on Poverty.”

His ideas are bold. He wants an Educational Opportunity Fund (EOF) to grant $5000 “to every child born in the United States” so that they could eventually graduate college without debt. He wants a “huge public works trust fund” that would provide useful jobs, like fixing bridges, during times of high unemployment. He wants the federal government to provide gas stamps, raise the minimum wage and guarantee a minimum income — perhaps $7000 per year for every man, woman and child in America.

Of course, we would pay for all these programs with higher taxes. Abramsky would increase capital gains taxes, inheritance taxes and income taxes for the upper brackets. The EOF and the public works would be funded by a small hike in payroll taxes. An additional $150 billion could be raised by taxing all financial trades, “from stocks to bonds, from currency trades to credit default initiatives.”

Certainly if we’re going to do anything about poverty, we must raise taxes. But Abramsky evinces the common misconception that if we just tax and spend enough, everything will be fine. There’s little discussion of the role that tax incentives might play in reducing poverty — say, for companies that raise wages or expand to areas of low unemployment.

Abramsky seems confused by the difference between government spending and disposable income. He complains about the “fripperies,” like plastic surgery and pets that Americans spend their money on, as if that cash would otherwise be funneled to the poor. And by the way, according to the Small Business Administration, companies that employ fewer than 20 people — like pet stores and plastic surgery practices — employ nearly 20 percent of American workers.

These missteps blunt the rhetorical force of “The American Way of Poverty.” And they will give conservatives a handy excuse to ignore its message. I suspect that the tepid left will ignore it as well, being that these days the most defining characteristic of liberals is that they hate conservatives, and not, say, their abiding concern for the underclass. All this is a shame, because Abramsky’s larger point is so important: Americans are suffering, and we’re not doing much about it.

Gordon Haber is, most recently, the author of the Amazon Kindle Single ‘Adjunctivitis.’

How the Other Half of America Still Lives