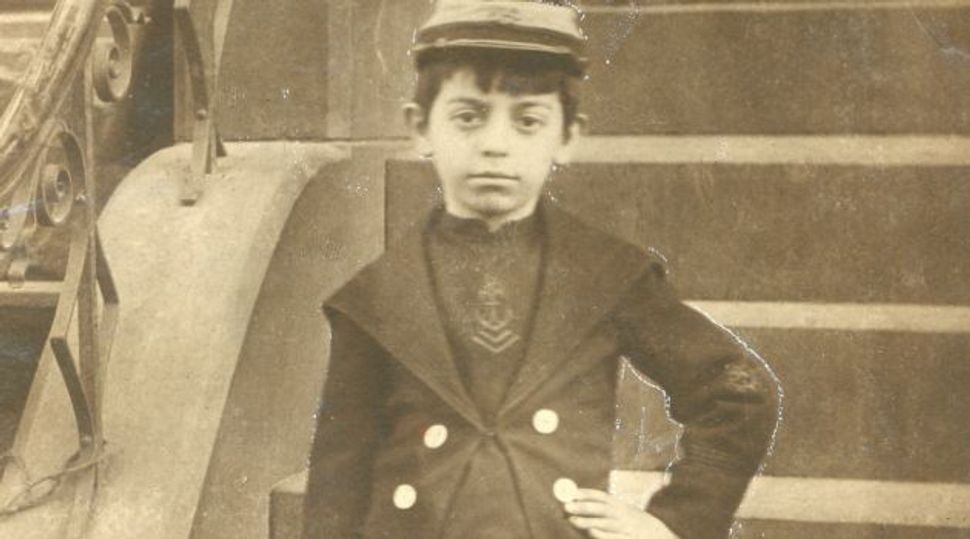 Future Star: Forverts favorite actor, singer and comedian Eddy Cantor on his stoop in the Lower East Side. He is pictured at about 6 years old in a holiday suit and shoes. Image by Forward Association

Captive in a Saloon

“I beg of you, please have pity on me and save me. I am being held captive. I am scared they will kill me. I am next to a saloon. Sarah.” So read a note written in Yiddish, found on an Osborn Street sidewalk in the Brownsville section of Brooklyn by one Louis Burstein. After reading it, Burstein translated it at the nearest police station. He then went with three detectives to the spot where he found the note. Looking around, they did, in fact, see a nearby saloon. After searching all the apartments in the tenement next door and finding nothing, they moved on to the tobacco shop on the other side of the saloon, which had two apartments above it. When no one answered the door, they broke it down to find a young woman and a man brandishing a chair at them. The man put down the chair after the cops pulled out their guns. Realizing she had been saved, the woman burst into tears. Only 20 years old, Sarah Rupak has been in the United States only six months. Irving Marcus, her captor, was placed under arrest.

Three thousand Arab villagers gathered on a hillside near Hebron and pledged their allegiance to the British rulers of Palestine. Demonstrators also fulminated against the mufti of Jerusalem and his followers, who they believe to be behind most of the terrorism in Palestine. Under the direction of the Arab leader and the sworn enemy of the mufti, Fakhri Bey Nashashibi, demonstrators swore loyalty to the British forces and thanked them for battling terrorism. Nashashibi also condemned the mufti and his followers for engaging in terrorism. A British official in attendance, one General O’Connor, thanked Nashashibi, telling him and the crowd that they would continue to fight terrorism in Palestine and that they hope Arab villagers will help them in their mission. Coincidentally, Sheikh Said Al Khatib, an administrator of the Haram al-Sharif mosque in Jerusalem, also an opponent of the mufti, was killed during the demonstration.

The trial of 22 Nazis who are accused of participating in the murder of 2 million people in the Auschwitz concentration camp network has commenced in Frankfurt, West Germany. Considered the largest and most significant trial of war criminals since the Nuremberg trials of 1945, the “Auschwitz trial,” as it is known, deals mostly with former SS members who returned to Germany and were viewed as “respectable” citizens after the war. Half the defendants are charged with murder, and the second half are charged with being accessories to murder. Led by Hans Grossmann, the prosecution spent five years collecting evidence; among this are interviews with 1,300 witnesses. At least 200 of those witnesses are expected to testify during the trial, which is projected to last six to eight months.