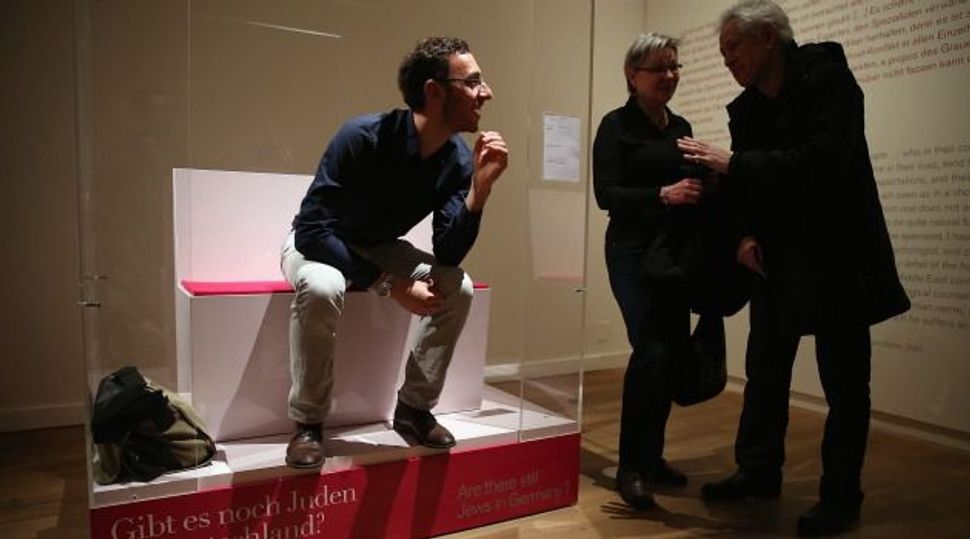 In And Out of the Box: On the 80th anniversary of the National Socialists? seizure of power, Berlin featured approximately 900 events, including the controversial ?Jew in a Box? at the Jewish Museum. Image by Getty Images

In April, a glass case in Berlin upset and polarized the Jewish world. An exhibit at the Jewish Museum, entitled “The Whole Truth… Everything You Always Wanted To Know About Jews,” included an installation consisting of a half-open glass case with the question “Are there still Jews in Germany?“ printed on it.

On a bench inside it, Jewish volunteers would sit for two hours most days and answer questions posed by visitors. The exhibit — aimed at discussing clichés, prejudices and unanswered questions about Judaism in Germany, where no more than 0.25% of the population is Jewish — was criticized by some as degrading and likened to a “circus sideshow.”

But this was hardly the only cultural happening relevant to the Jewish population in Berlin this year. The German capital commemorated the 80th anniversary of the National Socialists’ seizure of power in 1933, the 75th anniversary of the November pogroms, and the end of World War II in 1945 with a yearlong array of approximately 900 events, subsumed under the title “Diversity Destroyed. Berlin 1933 – 1938 – 1945. A City Remembers.”

The Jewish Museum was one of 170 partners in the initiative, which was organized by the state-run organization Kulturprojekte Berlin and funded by the Cultural Capital Fund, the German Lottery Foundations Berlin and private sponsors. (The “Jew in a Box” exhibit was not part of the official program.) Two other, less controversial shows were: “Bambi and the Theory of Relativity: Books on the Nazi Pyre” and “Ton in Ton: Jewish Ceramicists from Germany after 1933,” which runs until next February 9.

The yearlong project featured exhibitions, readings, guided tours and other initiatives aimed at commemorating and rediscovering the cultural and political diversity of Berlin that was rapidly and brutally destroyed after January 30, 1933. Several sites that played an important role during the Nazi reign, such as a school for Gestapo and SS officials in Berlin’s Charlottenburg neighborhood, received their first commemorative plaques this year. Other initiatives included the cleaning of the 5,000 Stolpersteine, small golden stones on the sidewalks with the names of murdered former inhabitants, and a presentation of student videos about diversity, projected onto the Brandenburg Gate on November 10 — almost exactly 75 years after ‘Kristallnacht’ on November 9, 1938.

But the most moving moments of the initiative were found on the streets: Eleven locations across the city featured steles with over 200 portrait posters that displayed photographs and biographies of artists, scientists, writers, politicians and other people who were persecuted by the Nazis. They included Albert Einstein and Hannah Arendt, both of whom emigrated to the United States, as well as people of local influence, including Kurt Singer, the leader of the Nazi-sanctioned Jewish Cultural League, who perished in Theresienstadt in 1944. Not all of them were Jewish, and not all of them were deported or forced to flee the country. Some were forbidden to work, including Erich Kästner, author of numerous children’s books including “Lottie and Lisa,” the inspiration for the movie “The Parent Trap.” Others were temporarily incarcerated or driven to suicide.

Placed in such popular areas as the Kurfürstendamm shopping street or the Lustgarten, the open-air portrait exhibition easily puts unprepared visitors in a contemplative, perhaps even emotional mood. The texts are short, and written in factual and unsentimental language — but are nevertheless vivid and touching: Each personal story stands for countless untold ones. Their silent presence on Berlin’s busy streets continues to poignantly bear witness to the all-encompassing impact of the Nazi regime.

Anna Goldenberg is the Forward’s arts and culture intern. A native of Vienna, she has contributed to Die Zeit, among other publications.