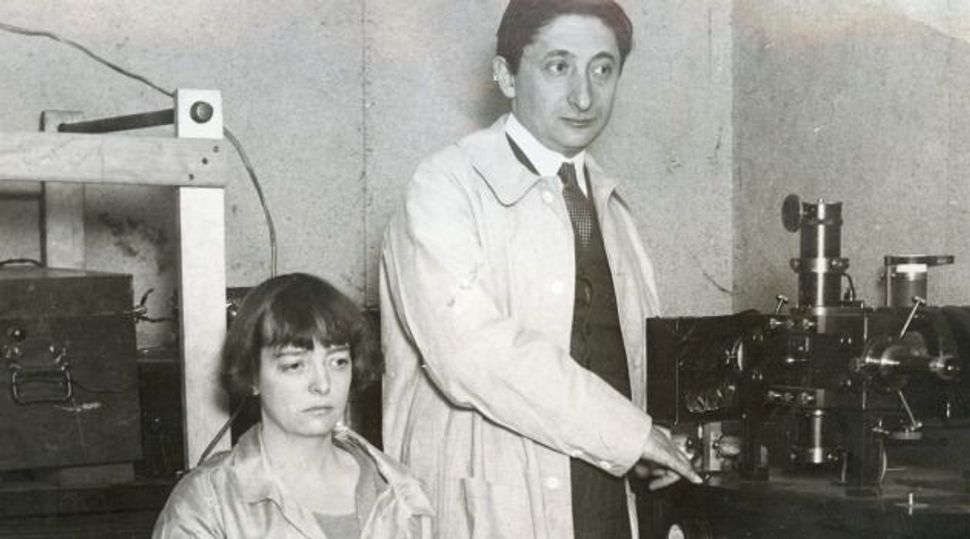 Experiment: Dr. Edmund Jacobson, a physiologist at the University of Chicago, was known as the ?father of progressive relaxation.? He encouraged stress reduction to improve health. Image by Wide World/Forward Association

An Army of Jewesses

A novel type of robbery has been taking place recently in the tenements of Manhattan’s Lower East Side: A tenant goes to a neighbor for a few minutes, and returns home to find something amiss: Someone has sneaked in and stolen something. A clever type of ruse that causes neighbors to accuse each other of thievery, this crime has become common and is well known. So, when a woman found a strange man hiding in the hallway toilet of her tenement at 17 Allen Street, she sounded the alarm. An army of Jewish women attacked the man. Led by one Annie Greenberg, the women began screaming and punching the man, beating him nearly senseless. He managed to escape their clutches and run out of the building, but this battalion of Jewesses followed him and finally cornered him on Division Street, where a policeman saw what was happening and arrested him.

Leave the children in Germany

The Palestinian Arab leadership has warned the British government that it will boycott an upcoming Arab-Jewish conference in London if the British permit Jewish refugee children to enter Palestine. According to a report in the Arab newspaper Al-Akhbar, the head of the Arab Council in London, Izaak Tanous, sent a telegram to the British colonial secretary, Malcolm MacDonald. The telegram explained that the Arabs will not tolerate a large-scale immigration of German-Jewish children and will not participate in the conference if German-Jewish children are permitted to enter Palestine. MacDonald has already informed the Jewish Agency for Israel that, because of the effect it would have on the conference, he cannot permit the entry of the 10,000 refugee children.

Israeli Premier Levi Eshkol condemned Syria’s barbaric treatment of Israeli citizens in its prisons. Eleven Israelis, three of whom were kidnapped last summer, were traded for 18 Syrians that were in Israeli jails. The joy of freedom for the Israelis, however, was tempered by the severe conditions they endured in prison. All the Israeli prisoners were in such pitiful physical and mental condition that they required hospitalization. The Israelis requested that the Red Cross investigate the conditions of the 11 prisoners, who were brutally tortured, but the response has not been made public. For years, the Syrian government denied that it held Israeli prisoners, but those just released proved that it did.