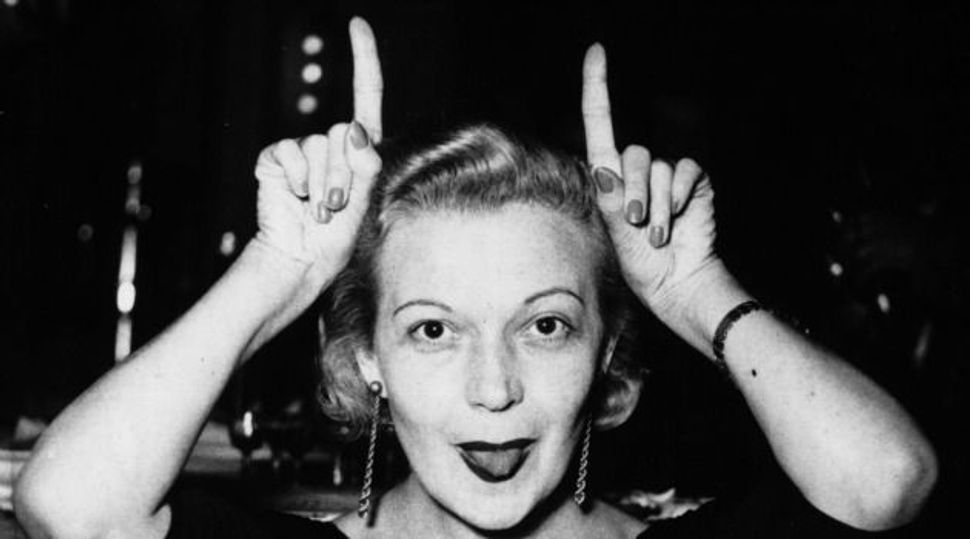 Madame Butterfly: Marta Eggerth has some fun with the press in 1965. Image by Getty Images

The Budapest-born soprano Marta Eggerth, who died on December 26 at the age of 101, incarnated the fact that the frothy Middle European art-form of operetta had a vastly significant Jewish element. Both Eggerth and her husband the star tenor Jan Kiepura (1902-1966), Poland’s prefiguration of Mario Lanza, had Jewish mothers. This made life difficult in the mid-1930s in Berlin where they starred in dozens of musical films for Universum Film AG (Ufa), Germany’s principal film company during the first half of the 20th century. Among the operetta composers who created works especially for Eggerth, a considerable number were Jewish, including her mentor Emmerich Kálmán, Fritz Kreisler and Paul Abraham.

All were inspired by Eggerth’s beauty and charm, which proved to be unusually durable, even in a field where more than one soprano has been dubbed an “iron butterfly.” Eggerth was a stainless steel butterfly, since her gifts remained intact for decades after most singers are already deeply entrenched in retirement. In 2010, I did an Arty Semite blog entry announcing that Dustin Hoffman was planning to direct “Quartet,” a film about a retirement home for opera singers, and suggested that Eggerth would be ideal casting. I promptly received an email from Debra Kinzler, director of public relations at the Manhattan School of Music, where Eggerth had recently given a master class. Kinzler informed me, “Marta saw [the blog entry] too, and was thrilled. Marta would love to meet Mr. Hoffman to speak to him about his project. Would you know how this could be arranged. Also, Marta at age 98, just bought her first computer yesterday! She is thrilled.” Actively planning for new career heights, as well as the capacity for being repeatedly thrilled, is rare in near-centenarians. But then, at the time, Eggerth was still performing well-received recitals at the high-priced Café Sabarsky at New York’s Neue Galerie museum.

Most remarkably, she was doing so with a decent amount of vocal technique intact. In 1984, when Eggerth sang in a production of Stephen Sondheim’s “Follies” in Pittsburgh at just a tad over seventy years old, she may have disappointed some Sondheim addicts by being in such fine vocal shape, spinning out a steady, sinuously seductive, apparently effortless sound. After all, Sondheim’s somewhat necrophiliac musical features an operetta waltz, “One More Kiss,” is intended to be sung by a decayed soprano, Heidi Schiller, in a duet with her younger, more sparkly-voiced self; then, and for years later, Eggerth could easily have performed both roles.

This durability was based on solid professional know-how, acquired early on. One of Eggerth’s notable early successes was at age seventeen, performing the role of the maid Adele in Max Reinhardt’s 1929 Hamburg production of Johann Strauss’ “Die Fledermaus.” Reinhardt (1873–1943) born Maximilian Goldmann to an Austrian Jewish family, was legendary for his stage-wise insights. Almost 70 years later, Eggerth shared with “Opera News” some of the dramatic insights she gained about the character Adele from Reinhardt. Eggerth loathed sopranos who use Adele’s laughing aria, “Mein Herr Marquis” as an occasion for coloratura display instead of genuine-sounding guffaws: “It’s got to be a real, natural, gutsy laugh…It doesn’t have to be exactly on the tone. She isn’t a princess, she’s a peasant, so she can laugh really vulgar.”

Although she sometimes incarnated vulgar maids onstage, Eggerth benefited from rubbing elbows with the most refined classical musicians of the golden age. Still in her teens, she was invited to perform one evening at Berlin’s Hungarian Embassy. As she had no pianist, “a little tiny old man sat down and played for me so divinely that I almost stopped singing,” as Eggerth recounted the tale in 1995 to journalist Brian Kellow: “Afterward I said, ‘You play so beautifully! You should be a professional pianist.’ And he said, ‘You think so? You don’t think I’m too old for it?’ I said, ‘Oh, no – you have great talent.’ He said, ‘Well, thank you. My name is Artur Schnabel.’” The great Austrian Jewish keyboard artist was playfully teasing Eggerth, but other greats, such as the noted Italian opera conductors Tullio Serafin and Victor de Sabata, were entirely serious when they coached Eggerth to prepare for the roles of Rosina in Rossini’s “Barber of Seville” and Gilda in Verdi’s “Rigoletto,” respectively. Despite such aspirations to grand opera, it was in her quasi-eternal mastery of light music that Eggerth would bring lasting joy to grateful audiences.