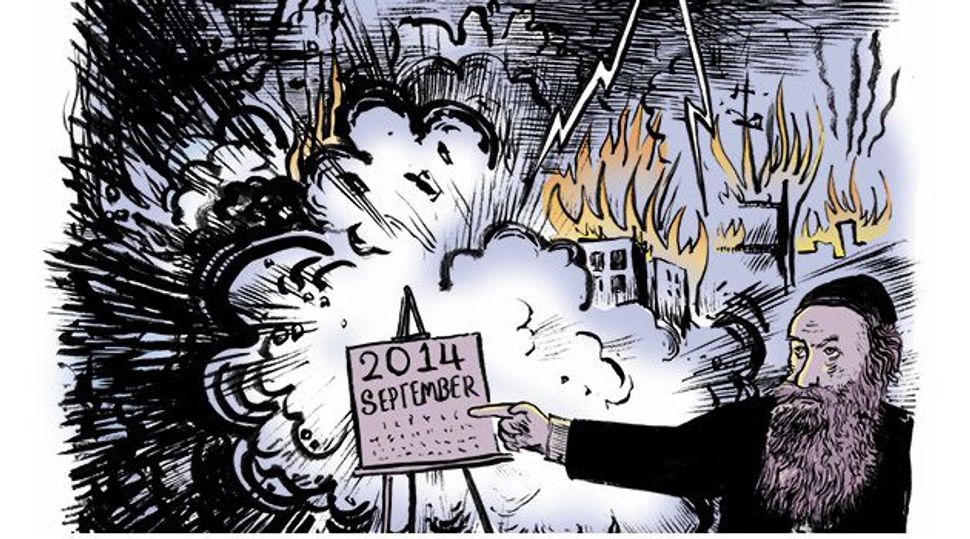 Waiting For the End of the World: Rabbi Shneur Zalman of Liadi may have foretold the apocalypse. Image by Kurt Hoffman

This may seem odd, but a surprisingly large chunk of the Western World believed we wouldn’t get to see 2013, purely because that’s what the Mayans thought. Most of these people never did anything else that Mayans did — never ate human flesh, for example, or at least never offered to pay for it. So why did they rush to embrace that specific bit of Mayan faith? Eschatology proves to be a human urge, just like hunger, sleep or love. We need to know that there’s at least a hint of a chance that the world is in danger, perhaps because it is too hard to care for anything that isn’t, or because it is easier to believe in a disaster that is inflicted on the planet from above than to admit to the one we cause daily. Secular media is fueled by eschatology — the Y2K bug, meteor scares, terrorist threats — with Hollywood blockbusters competing for the chance to feed it each summer. Who by fire? By water? By zombies?

If there is one thing in common among all the conflicting beliefs in the world, it is the belief that the world will come to an end. Hindus count down to the completion of Kali Yuga; Muslims await the arrival of Mahdi; Christians fear the Day of Wrath. Jewish participation in “hisuvei kitzim” — “end calculations” — is as harshly forbidden as it is widely practiced. Every great rabbi has an end date: The Vilna Gaon, Rashi, Maimonides. In 1927, Rabbi Avraham Yalin published a book in which he claimed that Zionism would be the end of the world and that it would reach its goal in 1948. He died in 1934 and never got to see which part came true. The Gemara itself claims that the world will get to be only 6,000 (Jewish) years old. In Gregorian Calendar time, this means 2,240.

But one of the most important and relevant rabbis of our time points to a much more imminent end. Rabbi Shneur Zalman of Liadi (1745–1812) was the founder of Chabad and was its first rabbi (Alter Rebbe, as the Lubavitch refer to him). He was the genius of Torah, responsible for the Tanya. In his book “Maamarei Admor Hazakein,” the old rabbi offered his own calculation: the Hebrew year of 5775, the year that will begin in September 2014.

Might 2014 to Chabad be what 2012 was to Mayans? The answer, Baruch Hashem, is cryptic: The rabbi could be talking about the end of the world, but could also mean the end of exile. And this exile could be physical exile, or it could be spiritual exile, which in itself is a complex, abstract concept, and so on. In fact, the ongoing debate concerning the end date — this relieved and disappointed crossing-out of previous “end dates” from the calendar — seems in itself a practice of Jewish faith: Time, we learn again and again, has many ends. As many as there are people in the world.

Gon Ben Ari is an Israeli writer and a journalist currently living in Brooklyn. His second novel, “Sequoia Children,” is now being translated from the Hebrew.