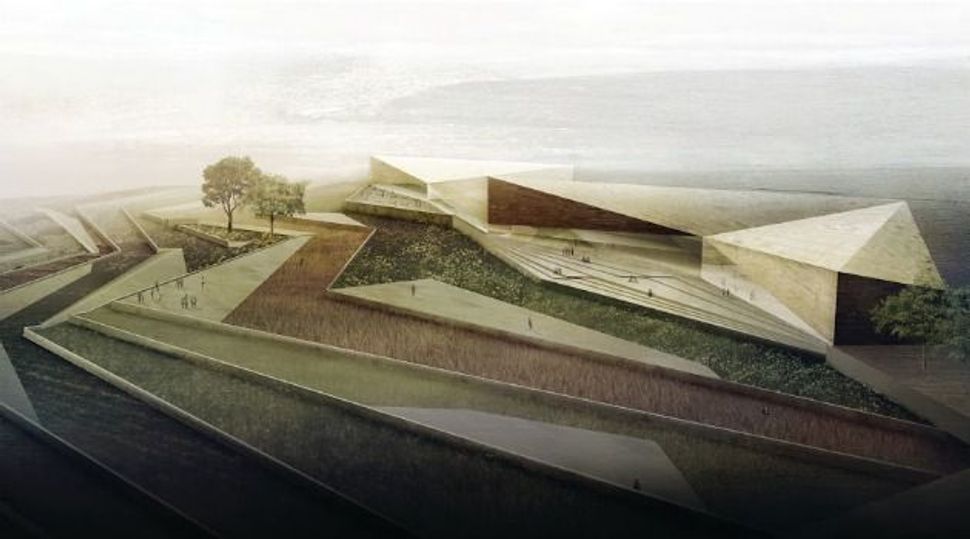 2014 will see intensified preparations for the projected April 2015 opening of the Palestinian Museum, which will be the biggest museum devoted to Palestinian culture and identity.

Since last April’s groundbreaking ceremony for the 3,000-square-meter project — the size of half a regulation soccer field — director and head curator Jack Persekian has been busy coordinating the opening exhibition and gathering a staff.

The museum in Birzeit, outside Ramallah, is funded by the Welfare Association, a London-based organization of Palestinian businesspeople and intellectuals; the chairperson is Sawsan Al-Fahoum Jafar, founding president of Friends of Cancer Patients, in the United Arab Emirates. Aiming to present Palestinian history and culture, and to engage Palestinians in discussions about their identity, the museum will be the most exhaustive of its kind located in the Palestinian Territories. Although other institutions, such as the Panorama and Heritage of Palestine museum, in Jenin, and the Bethlehem Folklore Museum, exist, they are much smaller.

Palestinians living outside the West Bank, however, will have limited physical access to the new museum, as they require a special permit to enter the Territories, and even residents of the Territories can face multiple checkpoints. Which is why Persekian plans to finalize partnerships for roughly five satellite locations in Gaza, Jordan, Lebanon and the Gulf, as well as in other Israeli cities, by April 2014.

The museum is also developing a strong online presence as well as continuing education programs, with the hope of bringing art to Palestinian schools.

Rashid Khalidi, professor of Arab studies at Columbia University, who has written extensively about Palestinian identity and the struggle for statehood, is on the Welfare Association’s board of directors and is part of the Museum’s committee. “It is going to be a difficult business that will satisfy very diverse audiences that are forcibly separated,” he said, adding that curating portable exhibits will be a “physical nightmare” due to access restrictions in the Palestinian territories.

On the museum’s homepage, Palestinians are a invited to submit their contributions to the opening exhibition, “Never-part,” which will feature personal stories behind people’s cherished objects.

In 1997, the W.A. started planning and fundraising to create a Palestinian museum dedicated to commemorating the 50th anniversary of the Nakba, which refers to the displacement of about 700,000 Palestinians associated with the Israeli War of Independence, in 1948; but the second intifada, which started in 2000, brought the campaign to a standstill. When the plan was revived a few years later, new board members brought up a different idea: to “take the memory as a starting point, but we use that to look towards the future,” Persekian explained, stating that the museum “will look at culture in the broad sense, so art, literature, music and performance.”

In July 2012, the Irish architecture firm Heneghan Peng, which designed the Grand Egyptian Museum, scheduled to open in 2015 in Giza, was chosen for the project. The first phase, which encompasses a gallery and amphitheater on land leased from Birzeit University, is expected to be completed in time for the museum’s slated opening.

Persekian, a Jerusalem native, took his post at the Palestinian Museum at the beginning of 2013. He was the director of the Sharjah Art Foundation until he was fired abruptly in 2011, when a displayed artwork created by the Algerian artist Mustapha Benfodil and including sexually explicit text, caused controversy in the conservative emirate.

The museum will focus on what Persekian calls “the Palestinian condition,” and Persekian says he is somewhat disillusioned when it comes to communicating with the Israeli side: “There’s a real separation between both sides,” he said. There’s a wall, but [it’s] also between people. For those who can cross over, there isn’t any interest on both sides to connect or communicate with the other side.”

He added that the museum nevertheless could facilitate learning “to look beyond the polarized opinions of black and white [and] ‘us and them.’”

Anna Goldenberg is the Forward’s arts and culture intern. A native of Vienna, she has contributed to Die Zeit and to other publications.