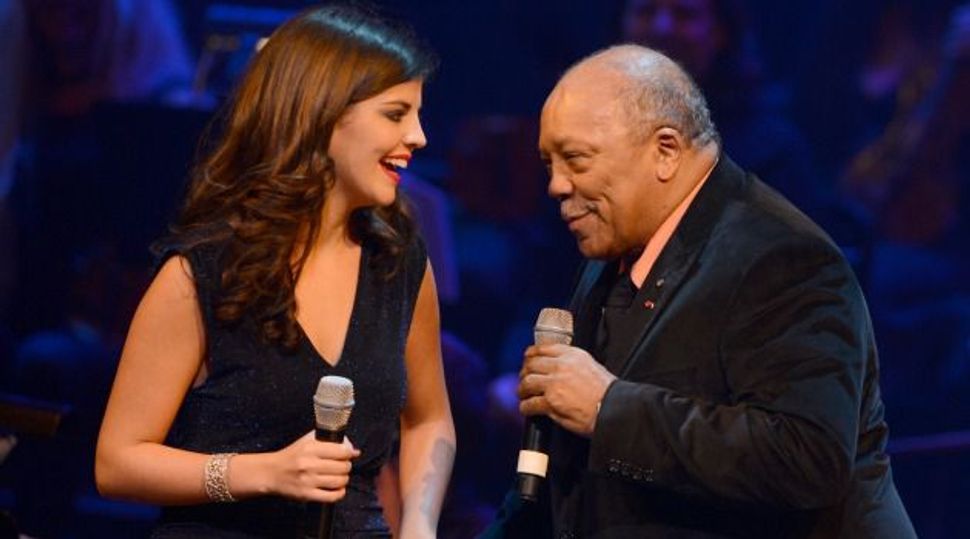 Darling Nikki: Nikki Yanofsky, who grew up in Montreal?s Jewish community, is one of Quincy Jones?s protégés. Image by Getty Images

Nikki Yanofsky seems preternaturally destined for global stardom. At the age of 12, she was spotted singing with her father’s garage band at a charity event for a Jewish geriatric center and was immediately invited to perform at the opening concert of the 2006 Montreal International Jazz Festival before a crowd of 125,000. Since then, she has performed with such luminaries as Stevie Wonder and Herbie Hancock, sang the theme song “I Believe” for the Vancouver Olympics, and has become the protégé of Quincy Jones, who is executive producer of her new album, “Little Secret,” which will be released this coming April.

All of this before her 20th birthday.

In some respects, the 19-year-old Yanofsky’s jazz career seems accidental. Growing up in the Jewish community of Montreal, she recognized the connection between her musical roots and her upbringing: “As Jews we put big emphasis on family,” she told the Forward, “and as a family, music was always around.” When first told she would be performing at a jazz festival, she says, she logged into iTunes and typed in “jazz.” “The first thing that came up was Ella Fitzgerald,” she said. “That’s when I heard her and that’s when I fell in love.”

Asked why she caught the attention of Jones when she was 14, Yanofsky said, “The reason why he took my meeting is because I sing jazz and there weren’t a lot of young people at that time who were singing jazz.” She recalled meeting at his house, where she sang “Lullaby of Birdland” and “Somewhere Over the Rainbow.” “He flew out of his chair and we ended up talking for two hours about jazz,” she said.

Yanofsky calls “Little Secret” the strongest and most cohesive work she’s recorded to date. “Before this album I had an idea of where I wanted to be but I didn’t know how to get there,” she said.

“My biggest goal is to bring jazz back,” she said. “Not that it’s ever disappeared, but I just mean for my generation — to bring it to a new audience.”

Harold Heft writes frequently about the arts for the Forward.