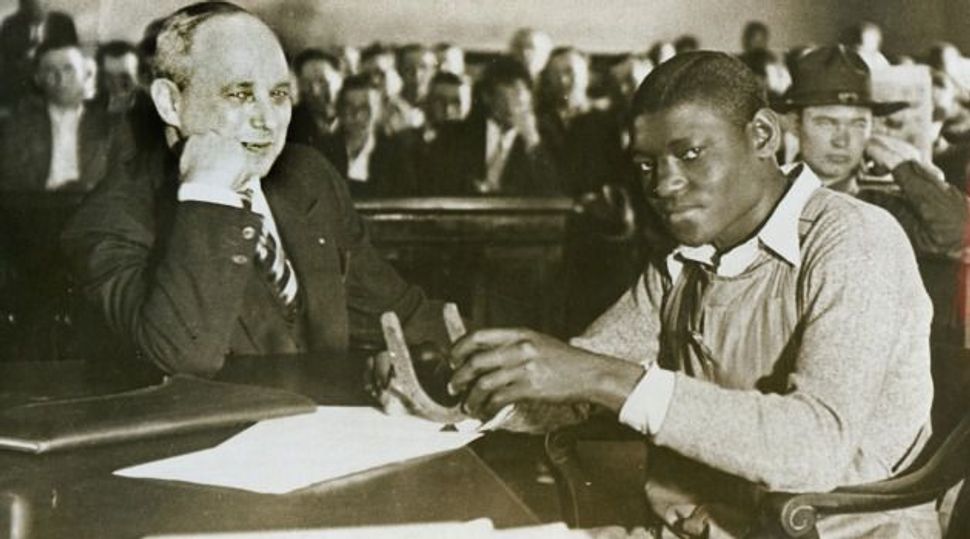 Injustice: Attorney Samuel Leibowitz with his defendant client ? Heywood Patterson, one of the nine Scottsboro Boys who were falsy accused of raping a white woman in Alabama in 1931. Image by Wide World/Forward Association

For the second time, Morris Bernstein, better known as “Moyshe the Greener,” will finally stand before a Brooklyn grand jury for last December’s murder of the Brownsville cloakmaker Harry Vileinki. The case made waves because fellow cloakmaker Abe Lipshitz was initially arrested for the murder, even though cloakmakers told police that he and the victim were close friends. Lipshitz, who had grabbed the knife that Bernstein used to kill Vileinki during the melee, was thought by the police to have been the perpetrator. As a result, he was placed under a $5,000 bond. During the events in question, which took place December 28, 1913, in the hall of the Brownsville cloakmaker’s office, the real killer, Bernstein, was nearly beaten to death by angry cloakmakers after being caught stabbing Vileinki. Bernstein was not expected to survive, but he did. Ironically, he is now expected to face the electric chair for his deeds.

Speaking in the Polish Sejm, Camp of National Unity’s deputy, Surczinsky, offered a warning to Poland’s Jewish citizens to consider emigration, sooner rather than later, as a policy to solve the country’s Jewish problem. Surczinsky, who was in the process of providing the Sejm with data on the Foreign Ministry’s expenses, gave the warning during a debate on the budget. “The Jews,” Surczinsky said, “should be aware that the Polish nation will dictate a solution in accord with the interests of the country, and that if the Jewish problem isn’t solved quickly, we will solve it our own way.” Surczinsky also complained that the Western European countries care only about Germany’s emigration needs and not Poland’s.

More details are coming out in the Arabic press regarding potential plans of action in connection with Israel’s intention to use some of the Jordan River’s water to irrigate the Negev desert. At a recent meeting of 13 Arab heads of state in Cairo, a number of ideas were bandied about, among them, the possibility of diverting the Hasbani and Banias rivers, in Lebanon and Syria, respectively. This would deny the Israeli portion of the Jordan much of its water sources. Though this would also be detrimental to Syria, Lebanon and Jordan, the plan is thought to be more damaging to Israel, which is why it is being considered in the first place. It was determined at the Cairo meeting that the $17.5 million cost of the project would be split among them, with the biggest share being paid for by the smallest Arab country, Kuwait.