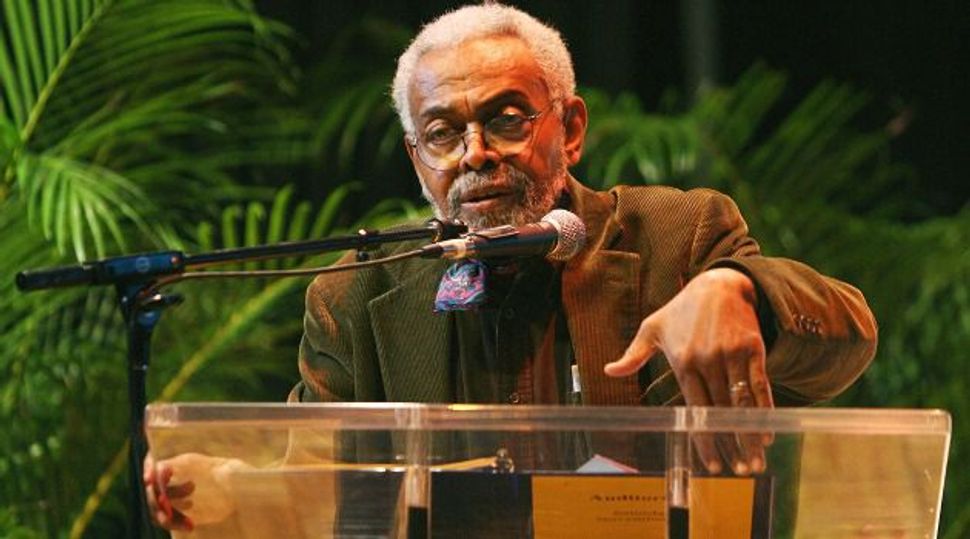 Provocative Discourse: At one point in his career, Baraka published a pseudo-disclaimer entitled, ?Confessions of a Former Anti-Semite.? Image by Wikimedia Commons

The Newark-born playwright and poet Amiri Baraka (formerly known as LeRoi Jones and Imamu Amear Baraka), who died on January 9 at age 79, has been receiving tributes, including in a few Jewish publications. This is unusual, for regardless of the supposed merits of his writings, over some decades Baraka produced a consistent series of anti-Semitic writings. To name only a few, in 1966, his poem “Black Art” declared “We want …dagger poems in the slimy bells of the owner-Jews…Look at the Liberal Spokesman for the jews clutch his throat and puke himself into eternity…Another bad poem cracking steel knuckles in a jewlady’s mouth.” In the poem “The Black Man is Making New Gods,” published in the Evergreen Review in 1967, Baraka wrote, “Atheist Jews double crossers stole our secrets…They give us to worship a dead Jew [Jesus Christ] and not ourselves…Selling fried potatoes and people, the little arty bastards talking arithmetic they sucked from the arab’s head…” His 1972 essay collection “Raise, Race, Rays, Raze” refers to people being “jew-slick,” “jeworiented revolutionaries,” and also “cohen edited negro history.”

In 1980, Baraka published a pseudo-disclaimer, “Confessions of a Former Anti-Semite,” which alleged that “the vaunted Jewish support of black civil rights organizations…was in order to use them.” Baraka also added that he was not anti-semitic, only “anti-Zionist.” However it could hardly have surprised anyone when after the 9/11 attacks, he advanced a conspiracy theory in the poem “Somebody Blew Up America”:

“Who knew the World Trade Center was gonna get bombed
Who told 4000 Israeli workers at the Twin Towers
To stay home that day
Why did [Ariel] Sharon stay away?”

Readers suddenly became alert to problems in Baraka’s discourse which had been present for decades. In 1964, Ralph Ellison reviewed then-Leroi Jones’ “ Blues People,” discerning a “straining for a note of militancy which is, to say the least, distracting. [The book’s] introductory mood of scholarly analysis frequently shatters into a dissonance of accusation, and one gets the impression that while Jones wants to perform a crucial task which he feels someone should take on — as indeed someone should — he is frustrated by the restraint demanded of the critical pen and would like to pick up a club. Perhaps this explains why Jones, who is also a poet and editor of a poetry magazine, gives little attention to the blues as lyric, as a form of poetry.”

Poetry was of less importance than violence, which is why Baraka’s early, overtly violent dramas such as “Dutchman” and “Toilet” may remain his lasting legacy. Ellison warned that Baraka’s black separatist analysis, ignoring what connects people to a larger society, attempts “delicate brain surgery with a switch-blade.” Pointing to an absence of critical intelligence, Ellison diagnosed what would be career-long weaknesses in Baraka’s work.

Baraka may be appreciated by some as a hasty, careless proto-hip hop lyricist (his fawning obituaries quoted his offensive writings, but rarely anything admirable). I experienced this slipshod quality circa 1977 as part of a small group of teenagers touring student cafeterias in New Haven, Connecticut to perform anti-apartheid agit-prop plays. The group’s director, Caveh Zahedi, an Iranian-American who later became a film director, thought of asking Baraka, then resident at Yale. to write some short texts for the occasion. Baraka produced a few playlets in minutes, apparently as fast as he could type them single-spaced on a manual typewriter, using both sides of the page. Most of these were rejected by Zahedi as inept and unplayable, and the single play that was performed required drastic editing.

Compare this approach with the exacting standards, patient work ethic, and dedication to improvement of Baraka’s first wife, Hettie Cohen (born in 1934 in Laurelton, Queens to a Jewish family). Her 1990 memoir “How I Became Hettie Jones” is a classic of Beat Generation literature. A dedicated teacher of poetry in prisons, Hettie Jones’s poetry collections, including “Drive”; “All Told”; and “Doing Seventy” are humane and well-honed, everything Baraka’s writings are not. Married in 1958, Baraka dumped his wife and two daughters in 1965, deciding that it did not befit a radical black separatist to have a Jewish wife and two daughters of mixed race. In a poem published in 1969, Baraka derided Hettie Jones as a “fat jew girl.” Posterity may one day decide that Hettie Jones did more for black culture with such celebratory childrens’ books as “Big Star Fallin’ Mama: Five Women in Black Music” and by co-authoring the memoirs of Rita Marley than her intemperate ex-husband ever did.